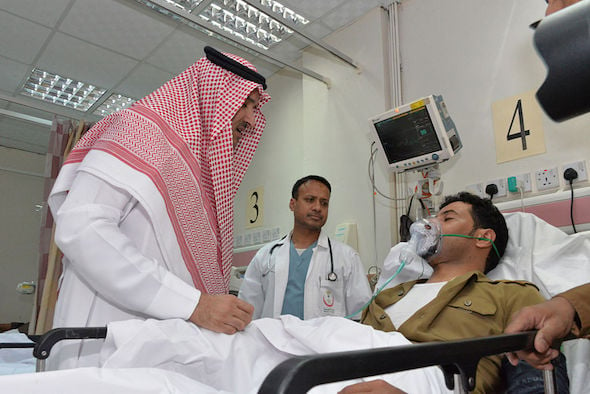 Suicide bombers, suspected of belonging to ISIL, blew themselves up in the cities of Jeddah, Qatif and Medina late on Monday, killing at least four officers.

UAE’s Minister of Foreign Affairs and International Cooperation Sheikh Abdullah bin Zayed Al Nahyan said: “We stand in solidarity with our brothers in Saudi Arabia in their fight against the crimes of terrorism whose goals are to spread fear, takfir (branding others as infidels) and incite strife.”

He said the UAE “fully backs any measures” that Saudi Arabia takes to eliminate the danger of terrorism which aims to undermine the security and stability of the kingdom and “which does not respect the sanctity of this month,” reported official news agency WAM.

The attacks, which took place just ahead of the start of Eid Al Fitr on Wednesday, targeted US diplomats, Shi’ite worshippers and the Prophet’s Mosque in Medina.

“Based on this fact, we believe that these crimes target the UAE, its cities and people,” he said.

“We are fully confident that the Saudi leadership will be able to eliminate the threat posed by terrorism and all its forms and manifestations, and that this deviant group of people will not succeed in achieving its goals, thanks to national solidarity and cohesion which recognises the futility of their goals, blood-thirsty crimes as well as the deviance of their claims.”

The minister also stressed that the attacks had nothing to do with Islam as a religion or with the region’s traditions and history.

He added that the threat of terrorism needed ‘cooperation, coordination and diligence’.

“They are renegades from the (true) religion who have left behind the Muslim flock and their imam, violating all sanctities,” the Secretariat of the Council of Senior Scholars said in a statement.

“They have no religion,” it added.