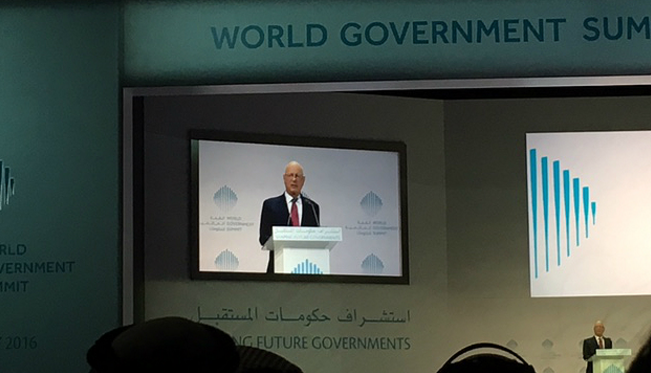 The United Arab Emirates has the capability to become a role model for the Middle East by adopting the latest technologies, the founder and chairman of the World Economic Forum said on Monday.

Speaking at the World Government Summit in Dubai, Professor Klaus Schwab said the “fourth industrial revolution” required governments to work closely along with businesses, academics and the young generation.

“The UAE is a small country but it has the chance to serve as a kind of lab. For example, if you take self driving cars and automated traffic, it requires agile legislation and coordination with automakers, the insurance industry and other players.

“The UAE has the possibility to create a test case for the world,” he added.

Schwab said there were three changes important for the future – innovation, re-organising government platforms and focus on human capital.

“Governments must not use a hierarchical approach – that will not work. They have to have an inclusive platform,” he said.

He also urged governments to have a long-term vision and “embrace change with passion.”

“Sometimes change does create fear and resistance, particularly in the government, because of a stable set-up. But change must be welcomed,” he stated.

“Revolution is coming like a tsunami, it will be overwhelming to see the changes,” he added.

US President Obama to address government summit in Dubai