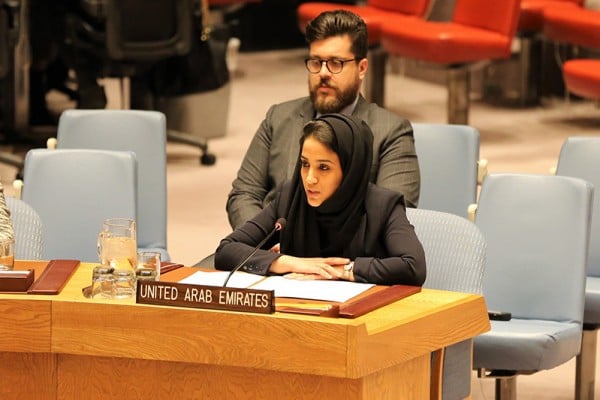 The UAE has urged the international community to work more closely together on addressing the root causes of human trafficking.

Amiera Obaid AlHafeiti, second secretary at the Permanent Mission of the UAE to the UN, made the call during the UN Security Council’s open debate on trafficking in persons in conflict.

In her statement, AlHafeiti stressed that a strategy of prevention was essential, including sustainable and inclusive development for all, said UAE state news agency WAM. She highlighted that no country was impervious to the impact of human trafficking, and put on record her hope that Security Council discussions on the subject will assist member states in confronting the role that conflict and instability plays in intensifying the problem.

AlHafeiti also stressed the plight of women and girls.

“In exploiting the vulnerable, women and girls are disproportionately affected,” she told the council.

“As a global champion of gender equality and women’s empowerment, the UAE believes that this is cause of grave concern,” she added, outlining the country’s strategy including the strengthening of its legal frameworks, national policies and social infrastructure to combat human trafficking.

In her closing remarks to the UN’s Security Council, AlHafeiti called for dual intervention at international level. Firstly, to holistically integrate responses by advancing cooperation between public and private sectors. And secondly, that the agreement on and adoption of the forthcoming Global Compact on Safe, Regular and Orderly Migration must include stipulations that address human trafficking.

The UAE has signed memoranda of understanding with five countries, most recently India, in a bid to address the conditions in countries of origin.