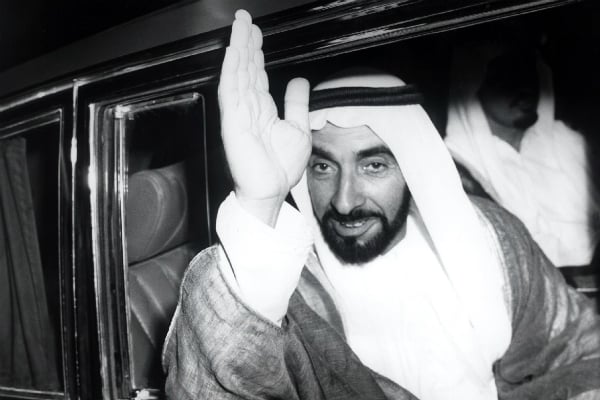 The memorial, which is currently under construction on the intersection of Abu Dhabi’s 1st and 2nd Street near the Corniche, will span an area of 3.3 hectares including a “monumental public artwork surrounded by a public plaza” at its centre.

The nature and design of the public artwork will be revealed at the memorial’s inauguration in 2018.

The site is expected to attract citizens, residents and international visitors and will offer an insight into Sheikh Zayed’s legacy including “his life, his goodness compassion and humanitarianism, his unique wisdom and his vision for the future”.

“It is our duty as a nation, and our future generation’s obligation, to recognise and remember Sheikh Zayed as a symbol of humanity and unity for generations on end,” said deputy minister for presidential affairs Ahmed Juma Al Za’abi.

“This memorial is a strong testament to Sheikh Zayed’s legacy, and as per the directives of the wise leadership, is an affirmative recognition of the founding ruler’s pioneering leadership that created a clear roadmap to build and strengthen our nation,” Al Za’abi concluded.

“Unity is the way to strength, honour and power. Division only leads to weakness. There is no place in today’s world for weak entities. These are the lessons of history throughout the ages.”

“Our constant thinking of the past and all it has granted us, of the present and all the hopes that come with it, and of the future and all of its bright aspirations, will lead us at all times to build our country, its progress and its development.”

“If Allah the Almighty has favoured us with wealth, our first commitment is to seek Allah’s satisfaction and to express our gratitude to Him by utilizing this wealth to make this country better and to bring goodness to its people.”

“Arab oil can never be dearer than Arab blood.”

“Every individual has to perform his duty. Man is mortal, but his work is not. Therefore, work is greater than wealth.”

“He who does not know his past cannot make the best of his present and future, for it is from the past that we learn.”

Quotes taken from the book Father of Our Nation: Collected Quotes of Shaikh Zayed Bin Sultan Al Nahyan, which celebrates the thoughts and ideas at the heart of Sheikh Zayed’s legacy. The Arabic and English language coffee-table book features rare historical and contemporary photographs as well as quotations from the founding father of the UAE. Published by Motivate, the book is priced at Dhs95 and is available to purchase here.