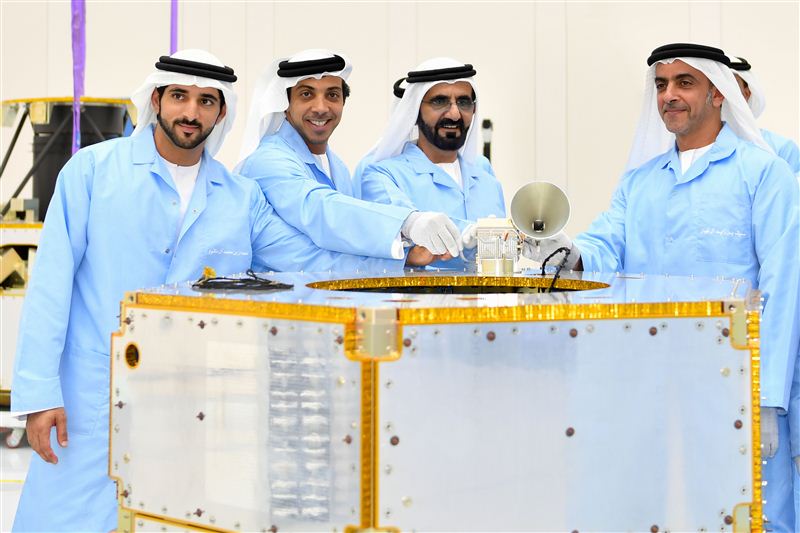 Vice President and Prime Minister of the UAE and Ruler of Dubai HH Sheikh Mohammed bin Rashid Al Maktoum has given the go ahead to begin manufacturing prototypes of the country’s Mars probe after reviewing designs.

The Dubai ruler gave his approval during a visit to Mohammed Bin Rashid Space Centre to open the second phase of the UAE’s satellite manufacturing and assembly complex.

Officials previously said manufacturing of the craft, expected to be the size of a small car, would begin this year.

During the visit Sheikh Mohammed installed the first part of KhalifaSat, the first satellite being built solely by Emirati engineering expertise.

The satellite, set to launch in 2018, will provide imaging capabilities to government and commercial entities and corporations.

“UAE ambitions is to explore the outer space. We are investing in our national cadres to lead this project and contribute in expanding our knowledge about Mars. Hope Probe is a qualitative leap for UAE’s scientific efforts, it the first contribution for the Arab world in this regard”, said Sheikh Mohammed.

Under the Hope Mars project, announced last year, the country is planning to send a probe to the red planet in 2020 to coincide with its 50th anniversary.

The probe will take seven months to reach Mars, where it will study the planet’s atmosphere until at least 2023.