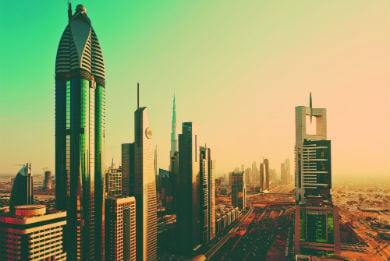 The UAE banking sector is on the road to recovery after some difficult years. Bank lending slowed in 2012 to just three per cent, with lower exposures to mining and quarrying and utilities offset by increased loans to governments and to the construction sector.

Loans for business purposes, the largest single sectoral exposure at around 18 per cent of combined net loans fell marginally in 2012, while personal loans for consumption purposes rose by 17 per cent but comprise only eight per cent of loans.

Banks in the UAE are focusing on expanding their retail loan portfolios, which are growing despite the Central Bank tightening lending criteria. Loan expansion has increased in 2013, helped by the improved operating environment, and lending is expected to rise by six per cent this year.

The majority of banks are reporting improved asset quality numbers, with the worst of the impact of the downturn over. Retail loans of local UAE banks had lower delinquencies in 2012 and this should be the case in 2013.

Corporate non-performing loans have also slowed. Banks continue to build their general and specific provisions for bad loans. General provisions increased last year, partly spurred by a requirement by the regulator to raise general provisions to 1.5 per cent of total risk-weighted assets by the end of 2014.

The on-going restructuring of loans to Dubai government-owned entities continued to elevate the NPL ratios of the Dubai-based banks, but most of the other banks have lower ratios. The NPL ratio for the UAE banking sector was nine per cent at the end of 2012 but has been falling in 2013 and should be below eight per cent by the year end.

Retail and consumer lending represents a strong growth area for UAE banks, and has undergone expansion. The overall economy is also expected to get a significant boost from Dubai’s successful Expo 2020 bid.

In order to help maintain credit quality, and particularly to prevent the problems caused by the property crash a few years ago, the Central Bank has recently issued a key mortgage cap regulation streamlining new bank lending norms in an attempt to prevent problems of uncontrolled lending to property buyers.

The rules also limit the period of mortgages to a maximum of 25 years. For expatriates the maximum age at the time of the last repayment is set at 65 years and for UAE nationals at 70 years. All mortgages for off-plan properties should be restricted to 50 per cent, regardless of purpose, value or nationality.

There has been a noticeable revival in the UAE real estate sector. Business confidence has risen and Dubai particularly has benefited from the flight of wealth and people from Arab countries affected by the Arab spring. The retail sector is booming, owing to the influx of visitors into Dubai, which now has the second largest airport in the world after Heathrow.

Dubai gets more than ten million visitors a year at present, and this is expected to double by 2020. The government of Dubai has announced several new projects as part of its plan to grow its tourism sector including the establishment of an entirely new city which will house the world’s largest shopping mall, five theme parks and 100 hotels.

These and other ambitious plans will require new funding, much of which will have to be raised via borrowings in the international markets. The government and some of its companies have raised sizeable funds in recent times.

The Dubai government comfortably collected $750 million through a 10-year sukuk (attracting nearly $9 billion in bids) and $500 million through a 30-year conventional bond in early 2013 on the back of improving investor confidence. A faster and more sustainable GDP growth in Dubai will depend on the extent to which the real estate sector will recover.

Emaar Properties and Nakheel, Dubai’s two major real estate developers, began marketing new projects in 2013 and prices of high-end villas in the emirate have recorded encouraging increases. However, there continues to be an excessive supply of commercial and residential real estate in both Dubai and Abu Dhabi. Nonetheless, prices for both villas and apartments have continued to increase in 2013.

Sanctions on Iran, one of Dubai’s largest trading partners, have not impacted the trade sector significantly, with markets such as Libya and other African countries stepping in to fill the gap.

Revenues of the federal and Abu Dhabi governments are expected to remain high on the back of elevated oil prices. The emirate of Abu Dhabi plans to spend $90 billion on development projects from now until 2017. Abu Dhabi remains committed to its ‘Plan Abu Dhabi 2030’ document, which envisages an ambitious investment of $400 billion till 2030 in energy and non-oil sectors.

The emirate intends to create new industrial clusters in previously under-developed regions and is investing in major civil projects, as well as in the health and education sectors. Federal government expenditure on development and social sectors in the northern emirates is also picking up and banks expect to benefit from this additional spending in 2013.

Among the Abu Dhabi government’s plans is a proposal to set up a financial centre similar to the Dubai International Financial Centre.

The UAE economy should record growth of four per cent in 2013 and at a similar rate in 2014. Continued expansion in the trade and hospitality sectors as well as a continued recovery in real estate, particularly for Dubai, and business services should support broader business activity.

Emirates NBD Bank (ENBD) continues to be a major player with a sizeable share of the banking business in Dubai. Following several years of low asset expansion, the bank moved into the growth phase in the second half of 2012 and into 2013.

An increased focus on new businesses, an enhanced presence in under-represented areas in other emirates, and regional and global expansion are key initiatives that are expected to drive growth business volumes and profits over the coming years.

Notwithstanding the challenges in Egypt, the Bank’s June 2013 acquisition of BNP Paribas’s well-managed and financially sound Egyptian operations could help diversify the balance sheet and revenue streams; at present, the business is very small.

While there remains high levels of NPLs, there have been some improvements. NPL accretions have slowed over the last few quarters and retail NPLs recorded a decline in H1 2013. Recoveries of older NPLs are gathering pace.

National Bank of Abu Dhabi (NBAD), the largest bank by assets in the UAE, posted its first profit drop in nearly two years in the third quarter of 2013, mainly because of a sharp fall in investment gains. Third- quarter net profit fell eight per cent to Dhs1.04 billion ($283 million) from Dhs1.12 billion in the pervious year.

However, profit for the first nine months of this year still rose 14 per cent from a year earlier to Dhs3.65 billion. Loans and advances grew to Dhs182.5 billion at the end of the third quarter, up 11 per cent from the end of 2012, while deposits expanded 21 per cent.

NBAD has been seeking to expand abroad from its largely saturated local market and the bank’s new CEO, Alex Thursby, who joined NBAD in July, has laid out a strategy for the next five years. It already has fairly extensive activities in the Arab world. However, NBAD plans to set up eight global hubs and build five international bank franchises as part of its overseas expansion strategy.

The bank will focus on Abu Dhabi, Mumbai, Lagos, Singapore, Hong Kong, London, Paris and Washington DC to serve clients in five key industries. NBAD plans to focus on financial institutions, energy and resources, transport, real estate and family conglomerates as well as trade and retailers, as part of its new expansion strategy. The bank will stop offering trade finance services outside these five. NBAD plans to tap trade and investment flows across the Middle East, Africa and Asia.

The bank also plans to build more than a one-branch presence in five countries which will typically be those with large populations, have fast-growing economies and a rapidly expanding middle class.

The lender is seeking to set up between 10 and 20 branches in these countries, with Egypt being the first and Malaysia likely the second. NBAD’s lending will grow 10 to 15 per cent this year and the bank has a 15 per cent medium-term return on equity target.

Abu Dhabi Commercial Bank (ADCB) continues to maintain its UAE- focused approach to business growth and international expansion remains a medium-term objective. There is substantial focus at present on growing the stable, core deposit base and on reducing the cost of funds.

The retail, Islamic and small business segments are also receiving considerable attention. Improving margins, on the back of lower funding costs, have contributed to the growth in net interest income years.

The bank’s estimated net interest margin increased in H1 2013. This was due largely to the reduction in the bank’s cost of funds. The sizeable growth in demand and savings balances and overall fall in interest rates have contributed to the bank’s falling funding costs.