The WEF noted that the annual index it started in 2006, which measures 144 countries for gender equality based on economic participation and opportunity, educational attainment, health and survival and political participation, shifted “into reverse” for the first time as the global gender gap increased from 31.7 per cent last year to 32 per cent in 2017.

Despite this, there was still positive momentum in the Middle East and North Africa region, which continued to rank last globally on the index but closed more than 60 per cent of its overall gender gap for the second year running. 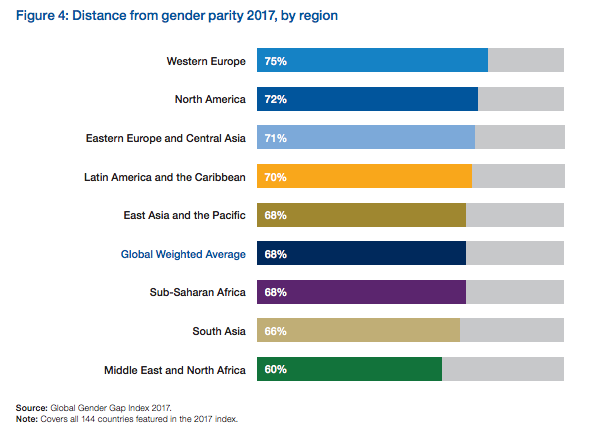 Among the top performers in the region were the UAE and Bahrain, which closed between 65 per cent and 63 per cent of their overall gender gaps.

The UAE held the highest ranking in the GCC, climbing from 124th to 120th, after seeing notable improvement on gender parity in ministerial positions and wage equality for similar work. It also came near to fully closing its gender gap on the educational attainment subindex.

Bahrain followed after climbing from 131st to 126th with a sizeable increase in gender parity in estimated earned income.

Kuwait fell from 128th to 129th after notable improvements in gender parity in professional and technical workers as well as healthy life expectancy but a decline in wage equality for similar work and women’s share of estimated earned income.

Qatar fell from leading the Gulf in 119th to 130th after positive achievements in educational attainment, healthy life expectancy and the number of women in legislator, senior official, manager, technical and professional roles were outweighed by a decline in wage equality for similar work and estimated earned income.

Meanwhile, Saudi Arabia climbed from 141st to 138th after re-closing its gender gap in enrolment in primary education and seeing some progress in gender parity for professional and technical workers.

The kingdom also saw a modest decline in wage equality for similar work and women’s share of estimated earned income but was recognised for the region’s largest improvement on the overall index over the last decade and the second largest relative improvement globally on the economic participation and opportunity subindex.

Oman appeared to be absent from this year’s ranking after standing in 133rd last year. A country must have data available for a minimum of 12 indicators out of the 14 that make up the index to be included in the report.

Globally, Yemen, Pakistan and Syria maintained their positions at the bottom of the table in 144th, 143rd and 142nd respectively.

There was some movement in the top three though with Iceland maintaining its position in first but Norway overtaking Finland in second. Rwanda also overtook Sweden to claim fourth and Nicaragua entered the top 10 in sixth.

Slovenia, Ireland, New Zealand and the Philippines completed the top 10.