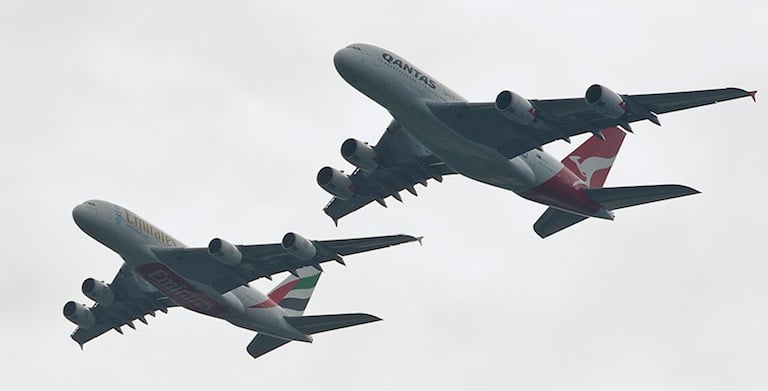 Trade between the UAE and Australia has grown 18 per cent in the last year, buoyed by increased ‘bellyhold’ aircraft capacity from Emirates, Qantas and Etihad Airways.

The Australian Minister for Trade and Investment, Hon. Andrew Robb AO MP, announced the growth figure at the Australia Unlimited MENA trade event on Sunday. He said trade has also jumped with the whole Middle East because of the hub nature of Dubai and Abu Dhabi.

Partnerships involving Emirates and Qantas and Etihad Airways and Virgin Australia have seen flights to the UAE grow four-fold to 160 a week.

“It’s taken the relationship to another level, there are many thousands of Australians travelling through the UAE… and what it’s done for the trade side of our relationship has been phenomenal,” he said.

Food & beverage continues to be a booming sector and 10 per cent of Australian agriculture now heads to the Middle East, much of it ending up on UAE shelves.

“Today I saw 500 Australian items in one supermarket and that’s a function of the connectivity that now exists between our two countries,” he added.

The Minister is also visiting Kuwait, Saudi Arabia and Qatar to promote trade links and kick-start negotiations for a GCC-wide free trade agreement.

“It’s an economic phenomenon that will never return,” he said. “It’s not just the economics, already 500 million have come out of poverty and there’s many more to come. It’s not something that’s happening in future but now.”