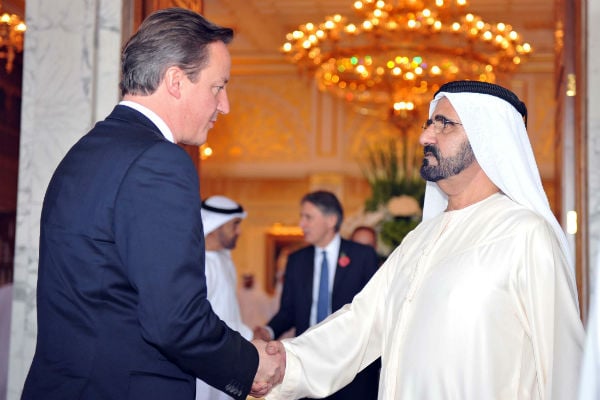 The United Arab Emirates and Britain plan to establish a defence and industrial partnership involving close cooperation around the BAE Systems-built Typhoon fighter jet, the countries said in a joint communique on Tuesday.

The statement, issued as British Prime Minister David Cameron ended a two-day diplomacy and trade visit to the UAE, said the defence alliance would also collaborate on “a number of new technologies”. It did not elaborate.

Cameron promoted the Typhoon to Emirati ministers during his visit; his office and BAE officials have said the Emiratis have shown interest in ordering up to 60 of the aircraft. The two countries have also been discussing how to develop a “strategic air defence relationship”.

The UAE, seeking to diversify its economy away from oil, is developing both its defence industry – agreeing in September to make guided weapons systems in Abu Dhabi with a South African firm – and a fledgling aerospace sector, which produces parts for Airbus passenger jets.

Britain has historic ties with the UAE and other Gulf Arab states, many of them former British protectorates and regional allies. Areas of mutual interest include facing down perceived threats from Iran and securing oil supplies.

Tuesday’s communique said the UAE and Britain would increase their joint military exercises and training. It pledged to facilitate travel between the two countries, but gave no details.

Cameron was due to visit Saudi Arabia later on Tuesday. His office said Saudi Arabia had signalled it was interested in placing a second “substantial” order of Typhoon jets, on top of the 72 jets that Riyadh has already bought.