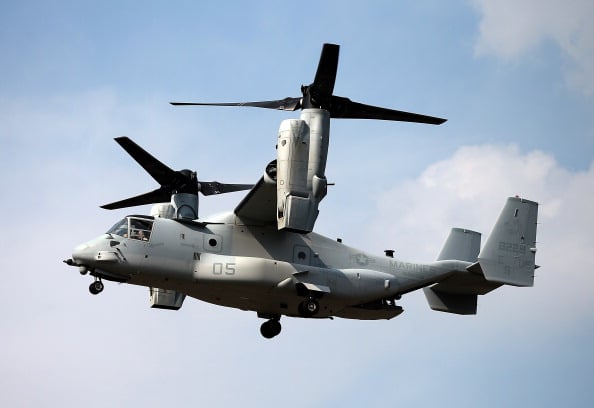 The United States is finalizing a complex $10 billion arms deal that would strengthen two key Arab allies while maintaining Israel’s military edge, defense officials said on Friday ahead of a trip to the Middle East by Defense Secretary Chuck Hagel.

The deal, more than a year in the making through a series of coordinated bilateral negotiations, would result in the sale of V-22 Osprey aircraft, advanced refueling tankers and anti-air defense missiles to Israel and 25 F-16 Desert Falcon jets worth nearly $5 billion to the United Arab Emirates.

The UAE and Saudi Arabia also would be allowed to purchase weapons with “stand-off” capabilities – those that can be used to engage the enemy with precision at a greater distance, defense officials said.

The deal marks the first time the United States has offered to sell tilt-rotor Ospreys to another country, and the “stand-off” weapons would give Saudi Arabia and the UAE a more advanced capability than they have had in the past, said the defense officials, who spoke on condition of anonymity.

“This is one of the most complex and carefully orchestrated arms sale packages in American history,” one of the officials said. “That’s not just because of the kinds of equipment that we’re providing to Israel and Saudi Arabia and the Emirates. It’s also a reflection of intensive defense shuttle diplomacy.”

The announcement comes amid mounting concerns over Iran’s nuclear program, with little progress reported at talks this month between Iran and world powers. U.S. officials concede that crippling sanctions have so far failed to force concessions from Tehran, which insists its nuclear program is peaceful.

Israel has renewed warnings it reserves the right to resort to military action to stop what it says is Iran’s pursuit of nuclear weapons.

U.S. defense officials touted the arms deals as the culmination of President Barack Obama’s effort to find a way to boost the military capabilities of key Arab allies in light of the threats in the region while still fulfilling the U.S. policy of maintaining Israel’s military superiority.

“This not only sustains but augments Israel’s qualitative military edge in the region,” one of the officials said. “This package is a significant advance for Israel. … This is about giving all three partners in the region added capacity to address key threats that they may face down the road.”

The announcement of the deal came as Hagel was preparing for his first trip to Middle East since taking office in February. He planned to visit Israel, Jordan, Saudi Arabia, Egypt and the UAE and was expected to continue discussions about the arms sale at stops along the way.

Defense officials said the Congress had not been formally notified of the arms sale as part of the approval process. That will come once the different countries finalize their purchase decisions and submit formal letters of request.

While the arms negotiations with the different countries were carried out bilaterally, defense officials said they had been transparent with all sides about the effort to boost the military capacities of all sides to address regional threats.

Sources familiar with the arms sales plans said Israel had asked to buy five or six V-22 Ospreys, built by Boeing Co and Textron Inc’s Bell Helicopter unit, at an estimated price of about $70 million apiece.

The UAE also is interested in purchasing the tilt-rotor aircraft, which takes off and lands like a helicopter but flies like a plane, the sources said. But that sale is likely to be included in a separate deal.

The United States sold Saudi Arabia 84 F-15 jets for $29 billion in 2010, planes that are now beginning to roll off the assembly line and undergo testing, officials said.