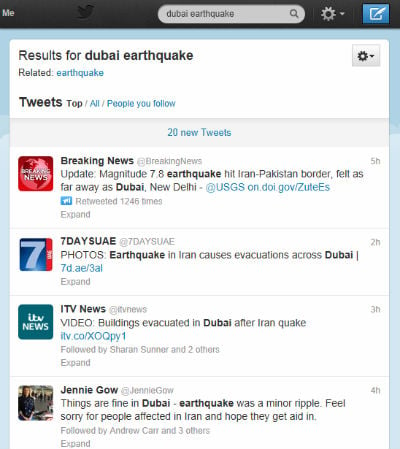 Residents across the GCC would be forgiven for thinking they stepped into a time warp today and were posted back to last week as another earthquake in Iran was felt across the Arabian Gulf.

As with last Tuesday, and at almost the same time, an earthquake measuring 7.8 on the Richter scale forced evacuations of offices and residential buildings across the UAE. And just like last week, one of the first things people did was take to social media websites and share their experiences.

Ahead of the Bahrain Formula One GP this weekeend, personnel and crew from sponsors and teams as well as members of the media – already in the Middle East in preparation – were not immune from the shockwaves.

Jennie Gow, F1 reporter for BBC Radio’s 5 Live programme, tweeted: “Things are fine in Dubai – earthquake was a minor ripple. Feel sorry for people affected in Iran and hope they get aid in.”

“F1 Tweeps in Bahrain and Dubai report feeling an earthquake. Another big one to hit Iran by all accounts, Only a week after the last one [sic]” reported Grand Prix Diary‏.

But Twitter user Desiree perhaps summed up the social media experience most succintly with the tweet: “In case of earthquake or fire, get out of the building first before you tweet it. #Dubai.”