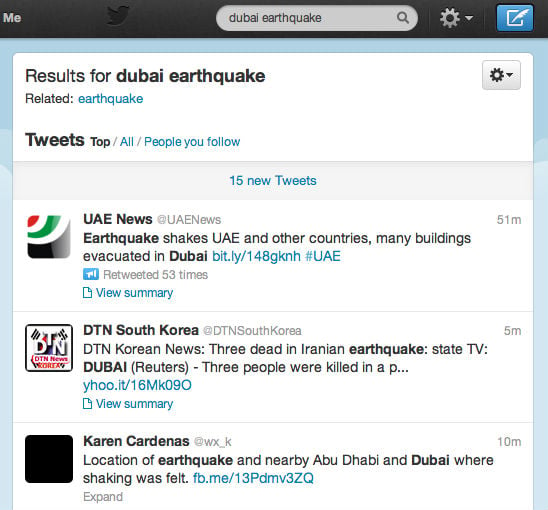 An earthquake measuring a magnitude of 6.3 struck in south-west Iran on Tuesday, 89 km (55 miles) from the city of Bushehr where the country’s nuclear power station is located.

Social media went into a frenzy immediately after the quake, as tremors were felt across the Arabian Gulf in the UAE, Bahrain, Qatar and Saudi Arabia.

Twitter showed many workers were in their offices when they felt the quake, with some buildings being evacuated due to safety fears.

The response on Twitter and Facebook demonstrated the popularity of sharing a human nature experience, and warning others of potential risk or danger, in the social media age.

@EQTW and @Quakeprediction are two examples of Twitter profiles created specifically to warn of earthquakes and tsunamis as they happen. Both accounts reported the Iran quake on Tuesday.

While many tweeters across the Gulf said they didn’t feel the earthquake, some users reported the swaying of buildings while workers in Tecom Dubai and Dubai Media City were advised to leave their offices by police.

Twitter user Ben Jacobs, a magazine editor, tweeted: “RIGHT… now, 15 minutes AFTER the earthquake has been and gone… WE’RE BEING EVACUATED!!! #farcical”.

Some users took the opportunity to view a humorous side to the quake. “Come on #Dubai if you have an earthquake it has to be the world’s biggest and strongest #disappointing”, said one user.