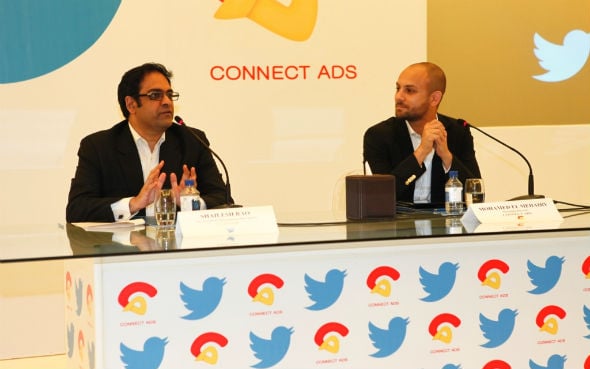 Twitter announced its first foray into the MENA region on Sunday, unveiling a partnership with local business Connect Ads.

The San Francisco-based company has chosen the local business as its official partner for the region where it will collaborate with Twitter’s own sales team, the two firms announced at a press conference in Dubai.

Shailesh Rao, Twitter’s vice president of international operations said: “We are excited to launch Twitter’s Promoted Products in the Arab region, one of Twitter’s fastest-growing regions, and where we continue to see users coming to Twitter to get closer to things they care about.

“This partnership [with Connect Ads] is in line with our strategy which is now focused on building out our international presence.”

Twitter has exploded onto the social media scene since its launch in 2006, with an active user base in excess of 200 million people.

The MENA region has seen some of the micro-blogging site’s most prolific growth, with a recent study by Deloitte showing that digital media will more than double its share of the Arab world’s advertising market by 2015.

Active Twitter users in the region include rulers, members of royal families, high government officials and popular political and economic commentators. There is also the ability for Arabic speakers to post tweets in their native language.

Mohamed El Mehairy, managing director of Connect Ads, said: “Brands from a very wide range of industries and sectors in the region can now use Twitter to share and interact with their client base and the public, steer conversations and strengthen their message on Twitter.

“Twitter is about everything that is buzz-worthy, and companies recognize that they have with Twitter a strong marketing platform that can help create positive sentiment around the brand, support them in reaching a new audience and strengthen brand loyalty.

Click here to see who are the top 10 tweeters in the Middle East.