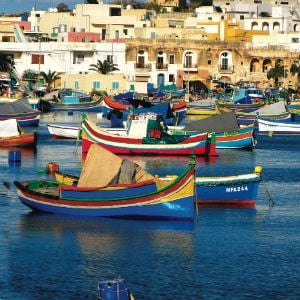 The hotel Phoenicia in Valetta is a charming product of a bygone age. Room keys still bear Le Meridien insignia long after this association ended. A honking flotilla of ancient yellow buses gathers in Valetta Square outside – the one deficiency of our trip is that we are not prompted to sample its delights.

The hotel’s delightful rooms smack of yesteryear, but are comfortable and have fine views of Valetta’s old city walls. The kitchen serves a sumptuous breakfast and the terrace looks out over the superb backdrop of Sliema and Gzira, the island in Valetta’s north bay.

The bar is crammed with pictures of naval vessels of yore, the backbone of British control of the Mediterranean and, in one corner, photos of a mysterious yet glamorous World War II blonde. Questions as to her identity cannot be answered.

First up is magnificent Mdina, perched on the island’s largest hilltop with superb views of a verdant hinterland. Malta has two cathedrals and Mdina offers one of them – the magnificent St. Paul’s cathedral – its commanding position overlooks the entire north and east of the island.

Built following the 1693 earthquake, it is a curtain-raiser for the magnificent Baroque architecture to be found all over the island. Its designer, Lorenzo Gafa, conceived its octagonal dome and lantern, perhaps in deference to its more illustrious namesake in London.

The site is venerated as the place where Malta’s first bishop, St. Publius, received St. Paul after his shipwreck off the island, recounted in the acts of the apostles.

Although the roads on the island are sometimes atrocious – at least for those used to Dubai’s slick freeways – they are definitely worth exploring. Visit the town of Naxxar, site of the Mosta Dome, clearly visible from Rabat, where lunch of the highest quality is available at the Palazzo Parisio restaurant, along with a stroll in its ornamental gardens.

Visitors from Dubai should take time out to take a look at Smart city Malta, the fruit of a 275 million investment by the government of Dubai designed to emulate Dubai Media and internet cities and convert the Ricasoli industrial estate into an information technology hub. The park is up and running but space is still available.

At the airport, Abu Dhabi’s Mubadala investment company has extended its investment in Zurich airport- based aircraft maintenance company SR technics, with the creation of a new MRO (maintenance, repair and overhaul) facility, which won an 11-year maintenance contract to oversee EasyJet’s Airbus A-319 fleet.

Beyond the airport lies Marsa Open Centre, a camp that is home to hundreds of African refugees – many of them from Eritrea or Sudan – fleeing the violence in Libya. One professed himself sick and tired of being stuck in Malta on a government handout of 80 a week, but added that the onward journey to Europe was barred.

Malta’s 359 churches are said to provide the opportunity for residents to attend mass every day of the year. Many of them are located in Valetta, the capital, which, like a mini-Manhattan, is criss-crossed with government ministries, businesses, shops and restaurants to sample at your leisure.

The highlight is the St. John’s co-cathedral, commissioned in 1572 by the Knights of Malta, who were to be expelled from the island by the French in 1798. It contains the signature painting The Beheading of St. John the Baptist, the only painting signed by Italian master, Caravaggio.

For those who like Europe with a meso-Mediterranean twist, Malta is definitely a destination to consider.