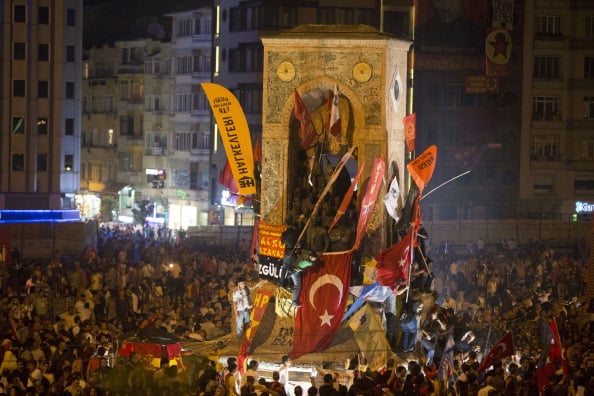 Turkish riot police fired tear gas and water cannon at hundreds of protesters armed with rocks and fireworks on Tuesday as they tried to take back control of a central Istanbul square at the heart of fierce anti-government demonstrations.

Hundreds of riot police backed by armoured vehicles surrounded Taksim Square as bulldozers began removing barricades of paving stones and corrugated iron built by the protesters. What began as a protest at redevelopment plans for the square has grown into an unprecedented challenge to Prime Minister Tayyip Erdogan’s Islamist-rooted government and divided Turks.

The unrest has damaged investor confidence in Turkey, previously an emerging market success story. The central bank said it would intervene if needed to support the lira, after the currency fell to its weakest against its dollar/euro basket since October 2011. The cost of insuring Turkish debt against default rose to the highest in ten months, although it remained far from crisis levels.

The police move, shortly after dawn, came a day after Erdogan agreed to meet protest leaders, whose peaceful demonstrations two weeks ago spiralled into anti-government protests in cities across the country in which three people have been killed and about 5,000 hurt.

Police removed huge banners hung by protesters from a building overlooking Taksim but the local governor said they had no intention of breaking up a peaceful campaign against government redevelopment plans inside the adjoining Gezi Park, where the demonstrations first began.

“Our aim is to remove the signs and pictures on the Ataturk statue and the Ataturk Cultural Centre. We have no other aim,” Istanbul Governor Huseyin Avni Mutlu wrote on Twitter.

Police hung a single Turkish flag and a picture of modern Turkey’s founder Mustafa Kemal Ataturk from the building.

Crowd control vehicles fired water cannon against groups of protesters who threw stones, fireworks and petrol bombs at the police on the edge of the square. Hundreds more protesters, many wearing face masks and builders’ helmets, gathered on steps leading from the square to the park.

“This movement won’t end here. We’ve started something much bigger than this park … After this, I don’t think people will go back to being afraid of this government or any government,” said student Seyyit Cikmen, 19, as the crowd chanted “Every place is Taksim, every place resistance.”

Police appealed to the protesters not to throw rocks, calling from loudspeakers, “Dear Gezi friends. We are unhappy with this situation. We don’t want to intervene. We don’t want to harm you. Please withdraw.”

Turkey’s Medical Association said that as of late Monday, 4,947 people had sought treatment in hospitals and voluntary infirmaries for injuries, ranging from cuts and burns to breathing difficulties from tear gas inhalation, since the unrest began more than ten days ago.

Erdogan has repeatedly dismissed the protesters as “capulcular”, or riff-raff. But Deputy Prime Minister Bulent Arinc said on Monday leaders of the Gezi Park Platform group had asked to meet him and Erdogan had agreed.

A meeting was expected on Wednesday.

Erdogan has made many democratic reforms, taming a military that toppled four governments in four decades, starting entry talks with the European Union, reining in rights abuses by police and forging peace talks with Kurdish rebels to end a three-decades-old war that has cost 40,000 lives.

His AK Party has taken Turkey from a crisis-prone economy to Europe’s fastest-growing over the past decade, and has won three successive elections, each time with a higher share of the vote.

But the protests have shaken Turkey’s reputation for stability. The ferocity of the initial police crackdown has drawn criticism from the West and Erdogan has increasingly accused foreign forces of trying to aggravate the troubles.

For the last ten days the protesters have controlled a large area around Taksim, with approach roads barricaded by masonry, paving stones and steel rods. Police had withdrawn completely from the area and kept water cannon vehicles hundreds of metres away by the side of the Bosphorus strait.

In a move that might add to discontent among secular Turks, President Abdullah Gul approved on Monday a bill that tightens restrictions on the sale and consumption of alcohol.

Turkey has a secular constitution but Erdogan’s Islamist-rooted AK party has come under fire for undermining the separation of state and religion. Critics accuse Erdogan and the party of trying to interfere in their lives.