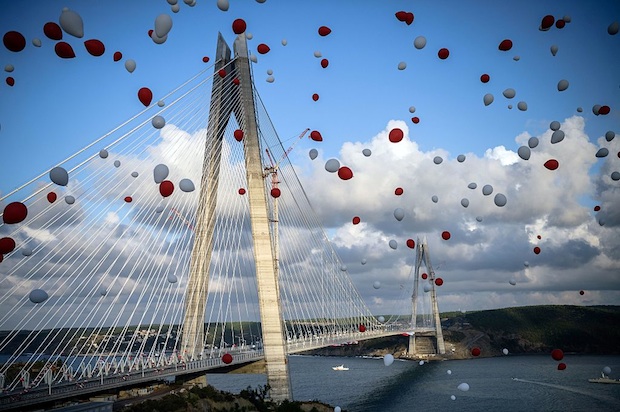 Turkey opened one of the world’s biggest suspension bridges on Friday, the latest megaproject in a $200bn building spree that President Tayyip Erdogan hopes will secure his place in history.

The bridge creates a new link across the Bosphorus Strait, which divides Asia and Europe. It is built in the style of New York’s Brooklyn Bridge and boasts pylons higher than the Eiffel Tower. It is 1.4 km (0.9 mile) long and 59 metres wide, with eight vehicle lanes and two high-speed rail lines.

“When man dies, he leaves behind a monument,” Erdogan told a crowd of thousands waving Turkish flags at the opening ceremony on the shores of the Bosphorus next to the bridge.

He is seeking to use such projects to drive economic growth and secure a place as Turkey’s most significant leader since the modern republic’s founder Mustafa Kemal Ataturk.

“Be proud of your power, Turkey,” said a TV advert before the opening of the $3bn Yavuz Sultan Selim Bridge on the edge of Istanbul. It is named after a 16th-century Ottoman ruler.

Erdogan’s infrastructure drive is transforming Europe’s biggest city, which straddles the Bosphorus Strait. In a little more than a decade, Istanbul’s skyline has soared, new highways have been built, and the length of the metro tripled.

But Turkey’s stellar economic growth has slowed since 2011 and it could face difficulties attracting investment following an attempted coup last month, which led to a purge by the government that has seen tens of thousands of people in the military, judiciary, civil service and education being detained, suspended or placed under investigation.

The country has also been hit by attacks this summer by ISIL on a wedding party and Istanbul airport, while the Turkish army’s incursion this week in Syria to curb jihadist and Kurdish forces has unsettled nerves.

But Erdogan – whose government announced a $200bn, decade-long infrastructure investment plan three years ago – has vowed the months of turmoil would not stop planned megaprojects.

The Yavuz Sultan Selim, which runs from the Garipce area on Istanbul’s European side to the region of Poyrazkoy on the Asian side, is the third bridge to span the Bosphorus Strait and can withstand winds of 300 km an hour. It ranks among the world’s biggest suspension bridges, in terms of width of deck, height of pylons as well as length of span.

It has been built by Italy’s Astaldi and Istanbul-based IC Ictas which will jointly operate it for about a decade.

Officials say the bridge will ease congestion in a city of 14 million people, reduce fuel costs and save workers time.

Environmentalists say the project threatens Istanbul’s last forestland and will contaminate water supplies. Some economists warn the costs of such large-scale building is unsustainable.

Turkey closed deals to secure $45 billion in private infrastructure investment last year, absorbing 40 percent of the global total, according to the World Bank.

Other planned megaprojects include the world’s biggest airport in Istanbul and a huge canal that would render a large chunk of the city an island.

“Turkey, by virtue of its geography, bridges Asia and Europe, the Balkans and the Caucasus, but to benefit from this position, we need arteries and corridors,” he told Reuters. “There is money to be made by easing transportation between Europe and Asia, and this is why we are doing these projects.”

As Arslan spoke, workers scaled the bridge’s gleaming white steel cables. Some 300 metres below, crude tankers rumbled north through the Bosphorus, one of the world’s busiest oil transit points, connecting the Black Sea and the Mediterranean.

The bridge “is a symbol and much like Turkey a gateway”, said Paolo Astaldi, chairman of Astaldi which owns a third of the joint venture. “It not only alleviates traffic in Istanbul, it speeds movement of goods across Turkey and, as Syria stabilises, the importance of the link will increase.”

Under a build-operate-transfer model, the consortium receives the toll crossing fees for vehicles using the hybrid cable-stayed/suspension bridge – $3 for cars and $15 for trucks. The government guarantees the firms will receive, as a minimum, the toll income from 135,000 cars a day, though the actual number expected to use the bridge is expected to be higher.

Planned Turkish megaprojects, if realised, may add 10 to 15 percentage points in the next five years to the debt-to-GDP ratio, now 33 per cent due to a wide current-account deficit, said Atilla Yesilada, an analyst at Global Source Partners.

“You’re trying to stimulate sagging growth with a surge in infrastructure, but you have a savings problem. There comes a point when the international community won’t lend to you.”

The bridge is part of a network of 215 km of transit roads for freight to bypass Istanbul, Arslan said, reiterating a government pledge to protect the area from housing development.

Yet realtors in nearby fishing and farming villages report a fourfold rise in land prices, and activists in the Northern Forests Defence campaign group believe the real aim is to erect new suburbs.

“Transit makes up 3 per cent of total traffic, so it won’t mitigate traffic jams,” said Cihan Baysal of the Northern Forests Defence. “This opens up hitherto pristine lands to more construction projects, because Turkey’s economy depends on construction … which paradoxically exacerbates traffic jams.”

The new roads seared gashes through forestland. Arslan said that while 380,000 trees were felled, 2.5 million were planted.

“These forests are Istanbul’s lungs,” said Baysal, pointing to a court ruling the bridge lacked an environmental report.

Among other concerns are the fate of what media reports said were a trove of unexcavated antiquities in the construction area, including Paleolithic remains and a Byzantine jail.

The two older Bosphorus Strait bridges, crossed by 150 million vehicles a year, sparked protests in 1973 and 1988; now their silhouettes define the skyline.

Even the third bridge’s name stirred controversy when it was announced at a 2013 ground-breaking ceremony. Selim I, known as Selim the Grim, expanded the Ottoman Empire to dominate the Middle East.

Many members of Turkey’s Alevi community, whose faith draws from Shi’ite, Sufi and Anatolian traditions, say Selim slaughtered tens of thousands of their forebears. They unsuccessfully lobbied to change the bridge’s name.