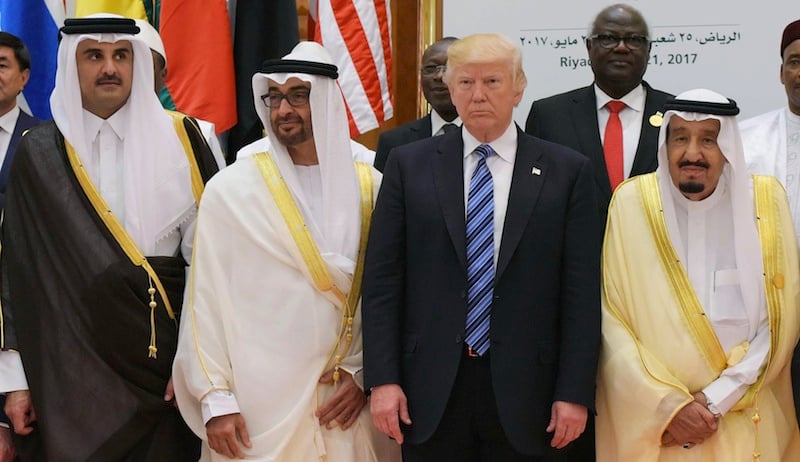 Saudi, Emirati and Qatari leaders will beat a path to US President Donald Trump’s door in the next few weeks for back-to-back visits that are unlikely to solve a long-running dispute among America’s Gulf allies.

Washington is keen to end the standoff between Qatar on one side and several other Arab nations on the other. The rift has divided the Gulf Cooperation Council (GCC) group of nations and hurt US-led efforts to maintain a strong front against Iran.

The United States was hoping to host a US-GCC summit later this year but the prospects of that happening appear slim given that the rival leaders are still at odds.

“They don’t see eye to eye. They’re not ready to solve this crisis,” a senior administration official said, referring to the parties embroiled in the Gulf crisis.

Saudi Arabia, the United Arab Emirates, Bahrain and Egypt cut off travel and trade ties with Qatar last June, accusing it of backing their arch-rival Iran and supporting terrorism. Qatar denies the charges and says the boycott is an attempt to impinge on its sovereignty and rein in its support for reform.

Washington has strong alliances with the rival sides. Qatar hosts the largest US air base in the region which has been crucial to its anti-Islamic State military campaign in Syria and Iraq.

At the same time, the Trump administration has forged even closer ties with Qatar’s rivals, Saudi Arabia and the UAE.

Saudi Crown Prince Mohammed bin Salman will meet with Trump on Tuesday in Washington and the Qatar dispute is unlikely to be at the forefront of issues the young leader will want to discuss, diplomats say.

And, keen to have the last word with Trump, Abu Dhabi Crown Prince Sheikh Mohammed bin Zayed has sought to meet Trump after a scheduled meeting with the Qatari emir, the senior administration official said.

Originally, the crown prince, sometimes known in the West as MbZ, was due to meet with Trump on March 27.

“MbZ in fact had asked Trump to be last,” the senior administration official said. No new dates have yet been set.

The leaders are likely to talk to Trump about countering Iran, combating Islamist extremism, and deepening economic and military partnerships.

“There appears to be little to gain – and a bit to lose – in Gulf partners agreeing to another US-GCC Summit of leaders hosted by President Trump at Camp David,” said a former senior US official who worked on regional issues.

“They have more to gain prosecuting their independent agendas in the bilateral visits to Washington already scheduled,” the former official said.

The Arab countries’ boycott disrupted Qatar’s imports and triggered the withdrawal of billions of dollars from Qatari banks by depositors from the four states.

Qatar, the world’s top exporter of liquefied natural gas, developed new trade routes and deployed tens of billions of dollars from its massive sovereign wealth fund to protect its banks.

The UAE in particular bristles at alleged Qatari support for Islamists throughout the region.

The Trump administration is worried that the split among Sunni Muslim US allies can benefit Iran in the tussle for influence in the Middle East.

So far, neither Saudi Arabia nor the UAE feel their demands have been met to resolve the dispute. At the start of the crisis, the four countries sent Doha a list of 13 demands, including closing the state-funded Al Jazeera television station and reducing ties to Iran.

While Qatar has increased its lobbying efforts in Washington, Riyadh and Abu Dhabi see the dispute as a “minor irritant” and “not an urgent problem, it’s one that they can live with for a very long time, that it’s not affecting US interests,” said Rob Malley, head of the International Crisis Group think tank.

“They want to treat it as part of the furniture and not as something that requires immediate attention,” said Malley, who has met recently with Saudi officials.

An apparently contradictory approach from the White House is also complicating US efforts to mediate in the dispute.

Trump at first swung decisively behind the Saudis and Emiratis, calling Qatar “a funder for terrorism”. But under pressure from outgoing Secretary of State Rex Tillerson and Defense Secretary Jim Mattis, he has since moderated his stance, calling for Gulf unity.

A senior US official with knowledge of the US mediation effort said there was still some willingness among the Gulf allies to begin a dialogue.

“They’re beginning to realize that this only plays into the hands of the Iranians, Syrians and Russians and it’s time to figure out how to resolve these issues,” the official said.

“Intellectually they know this has to be resolved, and it will only get worse and affect things…viscerally they would love to continue it in some way because the feelings are so strong,” the official said.