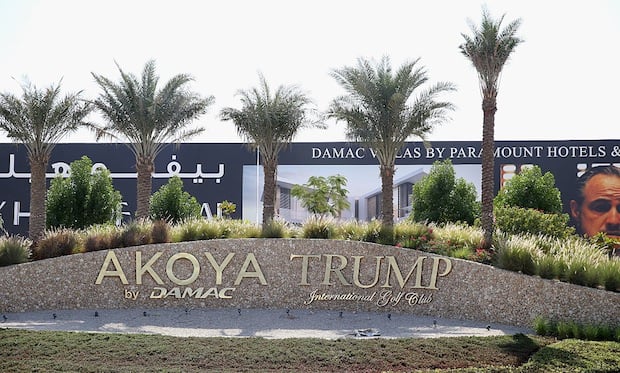 The Trump Organization’s website has long listed the Trump World Golf Club in the expat hub of Dubai as “coming soon.”

But four years after it was supposed to open for business, the 18-hole course designed by Tiger Woods faces yet another delay in the city, this time until at least 2022, according to a senior employee involved in the operation.

When it opens, the project will test whether Trump’s corporate brand holds the same allure in a region where the former US President has enjoyed broad support. And it comes as the company is figuring out its path forward with Trump out of office.

Grafted onto the desert and ringed by a luxury housing development, the golf course doesn’t yet display any of the typical, gold-emblazoned Trump signage. Instead, the name that’s ubiquitous is Damac Properties, the local developer and Trump partner that’s building the surrounding community, Akoya Oxygen.

While some homes in the development are occupied, vacant lots and empty homes can be seen sprinkled through neighbourhoods with names like Mimosa, Amazonia and Zinnia. On a recent Friday afternoon, there were more security guards than residents visible among rows of nearly identical white and yellow single-family homes. Sidewalks and playgrounds were empty, despite the perfect, 74-degree weather.

The golf course is mostly done, according to Bryon Bell, president of Tiger Woods’s TGR Design. But construction of the clubhouse is on pause for now, according to the person with knowledge of the matter, who asked not to be identified because the information isn’t public. The cause of the delay is unclear, even among top-level people working on the project, though some have been told it’s Covid-related, the person said.

The developer’s chairman, Hussain Sajwani, is sometimes referred to as the “Donald of Dubai” and is close with the Trump family.

Unlike some in corporate America, Trump’s partners in Dubai didn’t shun him after the deadly Jan. 6 events at the US Capitol. Shortly after the chaos, Sajwani said he was looking forward to doing even more deals now that Trump is no longer President. “I would welcome the opportunity of expanding our relationship with the brand and looking for more ways where we can collaborate,” Sajwani told CNN.

The riot earlier this year severed Trump’s longstanding ties with banks and real estate brokers, and booted him off social media. But one area that still seems potentially fruitful for him is with international licensing and management deals — similar to the one he has with Damac.

Eric Trump, executive vice president of the Trump Organization, declined to comment, as did a spokesperson for Damac.

Damac’s support for Trump hasn’t always been steadfast. A year after the Trump World project was first announced, Damac pulled the then-candidate’s image from a billboard after he proposed barring Muslims from entering the US.

At the time, Damac declined to comment on personal or political matters regarding Trump.

Less than two years later, the relationship was back on track. Within a month after Trump’s inauguration in 2017, Eric and Donald Trump Jr. flew to Dubai to celebrate the opening of the partners’ first golf course in the city, the Trump International Golf Course.

The opening of the second Trump golf course will be an important test for Dubai as it tries to dig out of a long real-estate slump.

Even before the pandemic, developers in Dubai were struggling to finish construction projects. Property prices have fallen for the past six years, shaving nearly 35 per cent off home values.

Sajwani has called for a moratorium on new construction to allow the market to absorb existing supply and prevent further deterioration to values. The government was forced to set up a committee to manage supply and demand as some of the city’s largest developers continued to build and predictions of recovery since 2014 have fallen flat.

The latest project will be part of the “prestigious 55 million-square-feet community of Akoya Oxygen,” according to the Trump Organization’s website. Akoya Oxygen will also include restaurants, swimming pools, a hospital and a mosque.