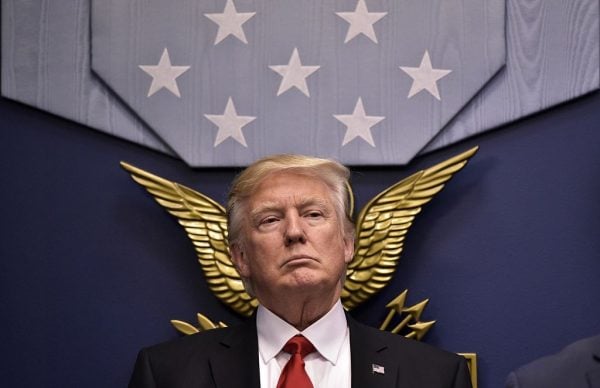 US President Donald Trump has warned OPEC not to tighten the oil market too much and risk another spike in prices that could harm the global economy – and his re-election campaign in 2020.

“Oil prices getting too high,” the president warned in a message posted on Twitter on Monday. “OPEC please relax and take it easy. World cannot take a price hike – fragile!”

The president has kept up a regular commentary on oil prices over the last year and has pressed Saudi Arabia, de facto leader of the Organization of the Petroleum Exporting Countries, to push them lower.

Read: Saudi’s Falih tells Trump ‘we are taking it easy’

Earlier interventions were triggered when prices climbed into the mid or high $70s per barrel but more recently the president has tweeted when prices were well below $70.

The president’s willingness to tolerate higher prices appears to be diminishing and his tweet-intervention zone has fallen over time.

But the most interesting part of Trump’s tweet was the third sentence, with its implicit recognition that global economic growth has slowed since the middle of 2018.

The president’s characterisation of the economy as “fragile” shows that the administration is aware of the suddenness and severity of the slowdown since September.

Like any first-term president, Trump’s top priority is being re-elected next year. No president wants to be confined to a single term and branded a failure.

Every president recognises the central electoral importance of the economy, so Trump is trying to eliminate all factors that could threaten a recession.

The president’s need to minimise recession risks explains his eagerness to conclude a trade agreement with China – even at the risk of undermining his negotiators.

The White House cannot afford to impose another round of tariffs on China if the consequence could be a further economic slowdown.

As a result, the White House has been preparing in recent weeks to postpone the tariff deadline and soften some of its demands on China for ambitious structural reforms.

The other major risks to the expansion come from rising interest rates and strengthening oil prices.

The president has already indicated his unhappiness with the Federal Reserve for raising interest rates and the central bank has backed off.

OPEC (for which read Saudi Arabia) is the other major source of recession risk if rising oil prices cause an already-slowing economy to lose even more momentum.

The president is putting the government in Riyadh on notice that it should not cut oil production too much for too long if doing so would risk a further substantial rise in prices.

The president could threaten to sign the NOPEC bill currently before Congress if the administration feels Saudi Arabia is allowing prices to drift too high.

The White House’s preoccupation with oil prices, the economy and re-election may make it cautious about toughening sanctions on Iran too much when the current waivers expire at the beginning of May.

If it does decide to reduce the number and scope of the sanctions waivers, the administration will almost certainly extract a commitment from Saudi Arabia to make up for any further Iranian barrels removed from the market.

Finally, the administration is likely to prove exceptionally sensitive about any spike in diesel prices as a result of new regulations scheduled to be introduced by the International Maritime Organization from the start of 2020.

The president wants a strongly growing economy and low to moderate oil prices throughout 2019 and 2020 to maximise his probability of re-election and should be expected to pull every lever to achieve them.

OPEC and Saudi Arabia have been put on notice about what they are expected to do to help.