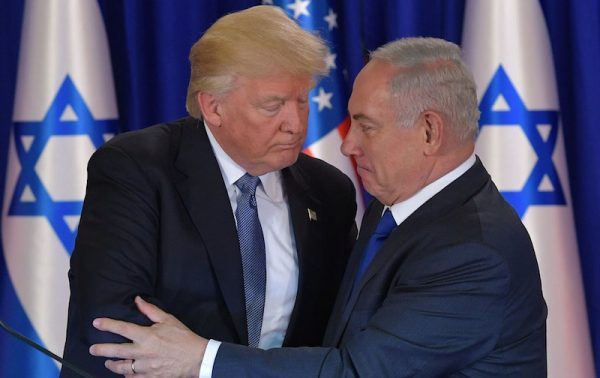 U.S. President Donald Trump said on Monday that shared concern about Iran was driving Israel and many Arab states closer and demanded that Tehran immediately cease military and financial backing of “terrorists and militias”.

In stressing threats from Iran, Trump echoed a theme laid out during weekend meetings in Saudi Arabia with Muslim leaders from around the world, many wary of the Islamic Republic’s growing regional influence and financial muscle.

Trump has vowed to do whatever necessary to broker peace between Israel and the Palestinians, dubbing a peace accord “the ultimate deal”. But ahead of his Holy Land visit, he gave little indication of how he could revive talks that collapsed in 2014.

Trump will meet Palestinian President Mahmoud Abbas in the West Bank town of Bethlehem on Tuesday and the Palestinian leader said he hoped the meeting could be “useful and fruitful … (and) will bring results”.

But in the Gaza Strip, dozens of Palestinians rallied against Trump and burned his picture and an effigy of him.

Trump received a warm welcome in Riyadh from Arab leaders, especially over his tough line on Tehran, which many Sunni Muslim Arab states regard as seeking regional control.

In Jerusalem, in public remarks after talks with Israeli leaders on the first day of his two-day visit, he again focused on Iran, pledging he would never let Tehran acquire nuclear arms.

“What’s happened with Iran has brought many of the parts of the Middle East toward Israel,” Trump said at a meeting with President Reuven Rivlin.

In his comments to Netanyahu, Trump mentioned a growing Iranian influence in conflicts in Syria, Yemen and Iraq, where it either backs Shi’ite fighters or has sent its own forces.

Trump said there were opportunities for cooperation across the Middle East: “That includes advancing prosperity, defeating the evils of terrorism and facing the threat of an Iranian regime that is threatening the region and causing so much violence and suffering.”

He also welcomed what he said was Netanyahu’s commitment to pursuing peace and renewed his pledge to achieve a deal.

Netanyahu, in his remarks, did not mention the word “Palestinians”, but spoke of advancing “peace in our region” with Arab partners helping to deliver it.

Israel shares the antipathy many Arab states have towards Iran, seeing the Islamic Republic as a threat to its existence.

“I want you to know how much we appreciate the change in American policy on Iran which you enunciated so clearly,” Netanyahu, who had an acrimonious relationship with former US President Barack Obama, told Trump at his official residence.

Trump, who is on his maiden foreign trip since taking office in January, urged Iran to cease “its deadly funding, training and equipping of terrorists and militias”.

Iran’s newly re-elected, pragmatist president, Hassan Rouhani, said regional stability could not be achieved without Iranian help, and accused Washington of supporting terrorism with its backing for rebels in Syria.

He said the summit in Saudi Arabia “had no political value, and will bear no results”.

“Who can say the region will experience total stability without Iran? Who fought against the terrorists? It was Iran, Syria, Hezbollah and Syria. But who funded the terrorists?”

Rouhani noted the contrast between young Iranians dancing in the streets to mark the re-election of a leader seeking detente with the West, and images of Trump meeting with a galaxy of Arab autocrats, some of whose countries have spawned the Sunni militants hostile to Washington and Tehran alike.

He also said Iran would continue a ballistic missile programme that has already triggered US sanctions, saying it was for defensive purposes only.

Trump’s foreign tour comes in the shadow of difficulties at home, where he is struggling to contain a scandal after firing James Comey as FBI director nearly two weeks ago. The trip ends on Saturday after visits to the Vatican, Brussels and Sicily.

In Jerusalem’s walled Old City, Trump toured the Church of the Holy Sepulchre and became the first sitting President to visit the Western Wall, Judaism’s holiest place where Israel allows Jews to pray in a city sacred to three religions.

Trump will have visited significant centres of Islam, Judaism and Christianity by the end of his trip, a point that his aides say bolsters his argument that the fight against Islamist militancy is a battle between “good and evil”.