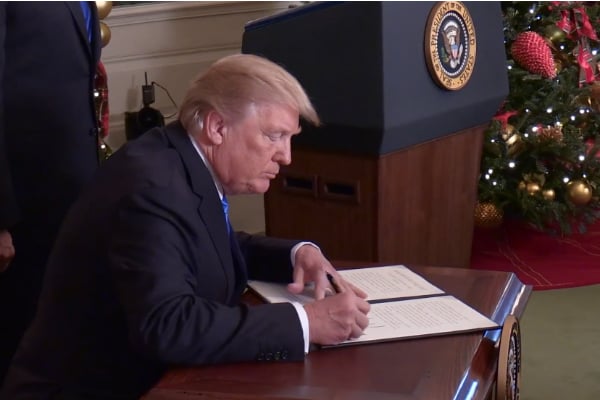 President Donald Trump on Wednesday reversed decades of US policy and recognised Jerusalem as the capital of Israel, imperiling Middle East peace efforts and upsetting the Arab world and Western allies alike.

Trump announced his administration would begin a process of moving the US embassy in Tel Aviv to Jerusalem, a step expected to take years and one that his predecessors opted not to take to avoid inflaming tensions.

The status of Jerusalem – home to sites holy to the Muslim, Jewish and Christian religions – is one of the biggest obstacles to reaching a peace agreement between Israel and the Palestinians.

Israeli Prime Minister Benjamin Netanyahu hailed Trump’s announcement as a “historic landmark,” but other close Western allies of Washington such as Britain and France were critical.

Palestinian President Mahmoud Abbas said the United States abdicated its role as a mediator in peace efforts, and Palestinian secular and Islamist factions called for a general strike and rallies on Thursday to protest.

The international community does not recognise Israeli sovereignty over the entire city, believing its status should be resolved in negotiations. No other country has its embassy in Jerusalem.

Trump’s decision fulfills a campaign promise and will please Republican conservatives and evangelicals who make up a sizeable portion of his domestic support.

“I have determined that it is time to officially recognise Jerusalem as the capital of Israel,” Trump said in a speech at the White House. “While previous presidents have made this a major campaign promise, they failed to deliver. Today, I am delivering.”

Protests broke out in areas of Jordan’s capital, Amman, inhabited by Palestinian refugees, and several hundred protesters gathered outside the US consulate in Istanbul.

The United States is asking Israel to temper its response to Trump’s announcement because Washington expects a backlash and is weighing the potential threat to US facilities and people, according to a State Department document seen by Reuters.

Israel considers Jerusalem its eternal and indivisible capital and wants all embassies based there. Palestinians want the capital of an independent state of theirs to be in the city’s eastern sector, which Israel captured in the 1967 Middle East war and annexed in a move never recognised internationally.

Netanyahu said any peace deal with Palestinians must include Jerusalem as Israel’s capital. That would be a non-starter for Palestinians in any negotiations if it meant the entire city would be under Israeli control.

“I think it’s pretty catastrophic, frankly,” said Hussein Ibish at the Arab Gulf States Institute in Washington, adding that “Trump did not distinguish in any meaningful sense between West Jerusalem and occupied East Jerusalem.”

Trump has tilted US policy toward Israel since taking office in January.

“He cannot expect to side entirely with Israel on the most sensitive and complex issues in the process, and yet expect the Palestinians to see the United States as an honest broker,” said former US Ambassador to Israel Daniel Kurtzer.

A statement from the Saudi Royal Court said the Saudi government had expressed “condemnation and deep regret” about the move.

A spokesman for British Prime Minister Theresa May called the US decision “unhelpful in terms of prospects for peace in the region.”

The United Nations Security Council is likely to meet on Friday over Trump’s decision, diplomats said on Wednesday.

Trump said his move was not intended to tip the scale in favour of Israel and that any deal involving the future of Jerusalem would have to be negotiated by the parties.

He insisted he was not taking a position on “any final status issues, including the specific boundaries of the Israeli sovereignty in Jerusalem, or the resolution of contested borders.”

Other key disputes between the two sides include the fate of Palestinian refugees and Jewish settlements built on occupied land. Trump made no mention of settlements.

He said he remained committed to the two-state solution if the parties want one. The president called on the region to take his message calmly.

“There will of course be disagreement and dissent regarding this announcement but we are confident that ultimately, as we work through these disagreements, we will arrive at a place of greater understanding and cooperation,” Trump said.

U.S. Representative Eliot Engel, a pro-Israel Democrat on the House Foreign Affairs Committee who is often critical of Trump’s foreign policy, said: “This decision is long overdue and helps correct a decades-long indignity.”

Trump acted under a 1995 law that requires the United States to move its embassy to Jerusalem. His predecessors, Bill Clinton, George W. Bush and Barack Obama, consistently put off that decision.

Trump ordered a delay to any embassy move from Tel Aviv since the United States does not have an embassy in Jerusalem to move into. A senior administration official said it could take three to four years to build one.

The Jerusalem decision has raised doubts about the Trump administration’s ability to follow through on a peace effort that Trump’s son-in-law and senior adviser, Jared Kushner, has led for months aimed at reviving long-stalled negotiations.

There was no indication Trump asked Netanyahu for anything in return when he notified the Israeli leader of his Jerusalem decision on Tuesday, a person familiar with the matter said.

But Aaron David Miller, a former Middle East negotiator for Republican and Democratic administrations, said Trump, who has long touted himself as a master negotiator, might be setting the stage for seeking Israeli concessions later.