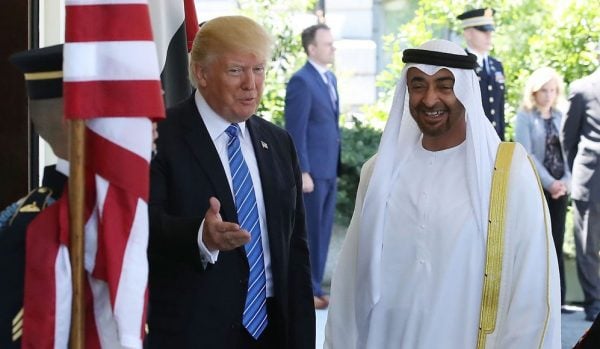 The six-nation group has been split since last June when the UAE, alongside Saudi Arabia, Bahrain and Egypt, accused, Qatar of supporting terrorist groups and closed diplomatic, trade and transport links.

There has been little sign of progress since then, with the UAE recently complaining to the United Nations’ aviation agency over alleged interceptions of its civilian aircraft near Bahrain by Qatari fighter jets.

“The leaders agreed that all GCC states can and should do more to increase coordination with each other and with the United States to ensure the peace and prosperity of the people in the region,” the White House said.

They also agreed on the “importance of a united GCC” and discussed ways the group’s member countries can be counter “Iranian destabilising activities and defeat terrorists and extremists” on top of other regional developments and opportunities.

The crown prince is due to travel to the US for a face-to-face meeting with Trump following a three-week visit to the country by Saudi Crown Prince Mohammed bin Salman.

The US administration of Trump is seeking an end to the regional rift, which it believes has complicated efforts against Iran.

The White House wants to host the leaders of the GCC, which includes Bahrain, Kuwait, Oman, Qatar, Saudi Arabia and the UAE, at a summit later this year but recently pushed back a potential May date amid a lack of progress in the Qatar dispute.

The leaders of Bahrain, Saudi Arabia and the UAE have previously stated they want Qatar to sever ties with Iran and shut broadcaster Al Jazeera as their conditions to end the boycott.