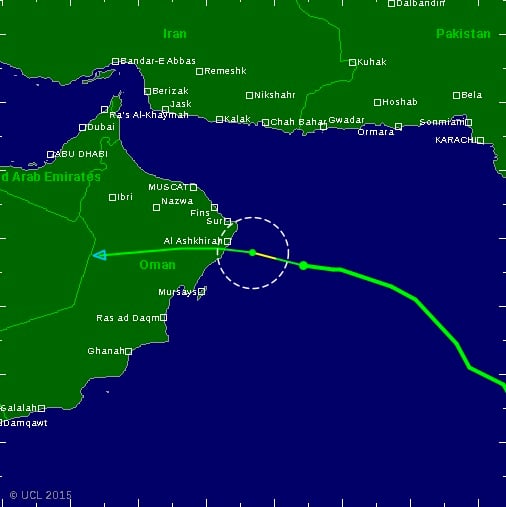 Tropical storm Ashobaa, brewing off the coast of Oman, may have an indirect impact on the UAE, the country’s National Center of Meteorology and Seismology has said.

The storm is expected to cause sea levels to rise over the east coast of the country by Wednesday night and Thursday morning, the NCMS said. It is also likely to lead to an increase in the amount of clouds, especially on the eastern mountains.

“Latest satellite imagery and observations in addition to the weather reports from the main regional centers, indicates that the tropical storm Ashobaa is currently centered at a distance of 650km from the south eastern province of Oman, with a surface wind speed around the tropical storm center between 35 – 45 km/hour,” the NCMS said.

It is anticipated to get closer to the southeastern province in Oman by Thursday morning, with a probability of scattered heavy rain and strong winds.

According to meteorologists at AccuWeather, the heaviest rain and wind associated with the storm will remain over the open waters of the Arabian Sea through the middle of the week.

However, seas will be rough for boaters and swimmers across the northern part of the sea, a report said.

If Ashobaa remains an organised cyclone to the point of landfall, heavy rain could spread into Oman as early as Thursday with additional heavy rains possible on Friday.

“This could pose a major flooding risk across the desert terrain,” said AccuWeather meteorologist Adam Douty.

The area of greatest concern for flooding currently extends from Muscat in the north to Duqm along the southeast coastline.

The threat of rough surf will gradually diminish across the entire region as the cyclone weakens either over the Arabian Sea or inland across Oman, the report added.