Trojena: All you need to know about Saudi’s new mega tourism project

Mohammed bin Salman, Crown Prince and chairman of the NEOM Company Board of Directors, last week announced the establishment of Trojena, a new destination for mountain tourism which will be part of the NEOM mega development.

The project is set to be ready by 2026. The new year-round tourist destination will consist of a series of facilities such as the ski village, ultra-luxury family and wellness resorts, a wide range of retail stores and restaurants, in addition to sports activities, including a ski slope, watersports and mountain biking, as well as an interactive nature reserve, according to Saudi Press Agency.

It will feature sports, art, music and cultural festivals. Trojena expects to attract 700,000 visitors and 7,000 permanent residents to live within the confines of the project and its adjacent residential districts by 2030.

All construction activity will adhere to NEOM’s commitment to minimize disruption to the local ecology and ensure long-term sustainability.

Situated in the center of NEOM, 50km from the Gulf of Aqaba coast, Trojena comprises of six districts: Gateway, Discover, Valley, Explore, Relax and Fun.

An advanced-technology gateway bringing the physical and metaverse worlds of NEOM together. #TROJENA #NEOM pic.twitter.com/gr1m3gAifr

While average temperatures around the year remain around 10 degree Celsius lower than other cities in the country, its winter temperatures drop below zero. Located at approximately 2,600 meters above sea level, outdoor skiing will be a unique feature of Trojena which is positioning itself as the GCC’s first outdoor skiing destination. 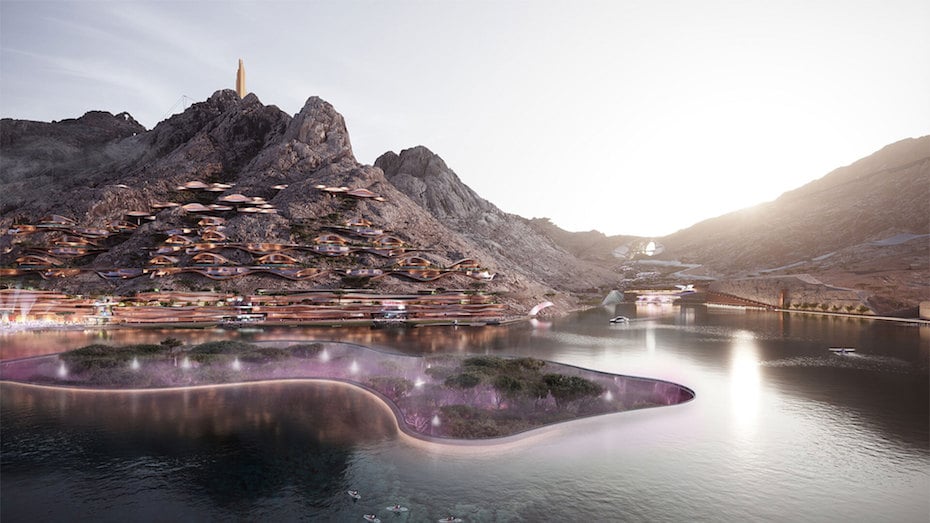 Highlights of the development include the all-year ski village; a man-made freshwater lake; The Bow Hotel; and the Vault vertical village within the mountain that merges technology, entertainment and hospitality facilities. The development will also include the ‘Slope Residences,’ which will be located near the ski slope overlooking the lake, and will blend in with the surrounding landscape.

“Trojena will redefine mountain tourism for the world by creating a place based on the principles of ecotourism, highlighting our efforts to preserve nature and enhance the community’s quality of life, which is aligned with the goals of the kingdom’s Vision 2030. It also confirms our commitment to be part of the global effort to protect the environment. Trojena will be an important addition to tourism in the region, a unique example of how Saudi Arabia is creating destinations based on its geographical and environmental diversity. This forward-looking vision will ensure that mountain tourism will be another revenue stream to support the Kingdom’s economic diversification while still preserving its natural resources for future generations,” said Mohammed bin Salman.

ATM 2022: In-destination experiences to shape the future of global travel and tourism