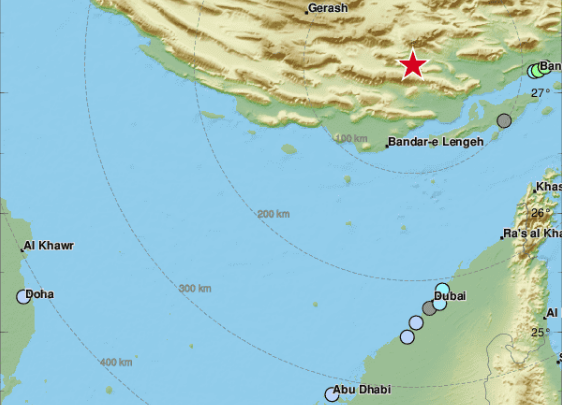 Tremors were experienced in parts of the UAE on Monday afternoon after an earthquake measuring over 5.7 on the Richter scale struck southern Iran at 2.48pm UAE time.

The UAE’s National Center of Meteorology’s (NCM) confirmed that residents in the northern part of the country felt the tremors.

A 5.1Magnitude Earthquake on Richter scale is recorded in South of Iran at 14:58, 21-10-2019 "UAE time” According to the NCM “National Seismic Network, it was felt by few residence in the north of UAE.

According to witness reports recorded by real-time earthquake information site EMSC, resident in Dubai and Abu Dhabi felt the tremors.

“Hanging lights were swaying on the ceiling,” said one person.

“The bed was shaking for a moment, lamps moving,” said another.

According to Iranian media reports, the earthquake struck the city of Kukherd in the southern Iranian province of Hormozgan at the depth of 10km.

No casualties have been reported so far and rescue teams have been dispatched to the affected areas to assess the situation, the report added.