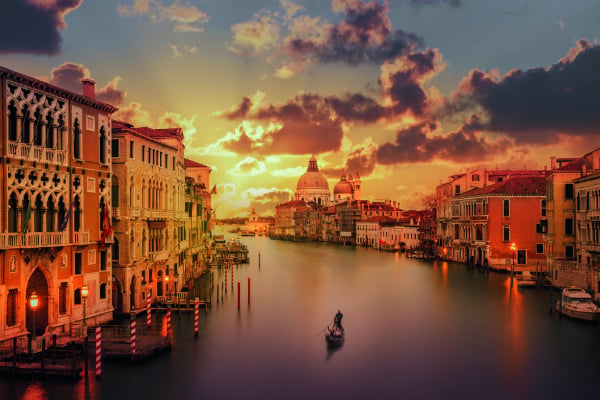 The magical city of Venice in Italy effortlessly hangs on to its charm like trinkets on a bracelet.

Not much has changed here over the centuries, but that’s part of its appeal —the beautiful architecture, stunning bridges and network of sleepy back canals are enough to immerse yourself in your own fantasy of travelling back 500 years to its heyday.

After losing your sense of direction in a labyrinth of narrow cobbled streets, you’ll come across the Piazza San Marco — the heart of Venice — full of cafes and shops.

In the 19th century, Emperor of France Napoleon Bonaparte called it “the finest drawing room in Europe”, which still resonates today with its elegant colonnades.

Visiting the plaza during the winter is just as magnificent as the summer, especially at Caffé Florian – the world’s oldest coffee house in continuous operation. Its 18th century interior will keep you mesmerised during the cold months, and when the warm weather arrives an orchestra play outdoors.

The plaza is also home to St Mark’s Basilica and the famous Campanile, which was recreated after the 8th century original collapsed in 1902.

Situated at the eastern side of the piazza is Basicila Di San Marco, originally built as the final resting place of Saint Mark. It was nicknamed the Church of Gold for its opulence and dazzling display of Byzantine mosaics across its ceilings and walls.

Round the corner, you’ll come across the Palazzo Ducale (Doge’s Palace) where dukes ruled the city often referred to as La Serenissima – The Most Serene Republic. The grandeur of its private apartments and the assembly room of the Council of Ten were intended to exhibit Venice’s wealth and power to visitors arriving by ship and to this day it doesn’t disappoint.

Another highlight is the Bridge of Sighs, linking the palace with the Palazzo delle Prigioni, where prisoners were held after being judged by the council.

An absolute must-do in Venice is a gondola ride, which can be found in the main tourist spots, such as the Doge’s Palace and Rialto Bridge. Despite being overpriced, it’s one of the most enjoyable ways of seeing hidden corners of the city. You won’t hear gondoliers singing as they did years ago, but the experience of gliding peacefully through hundreds of serene canals, is just as fun. 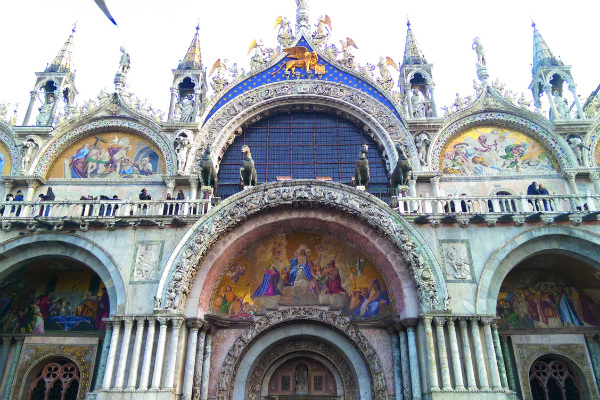 If you’re looking for a hotel with unrivalled service and comfort, the grand Aman Venice, is something to behold. Pitted against some tough local competition, the Aman manages to outshine them all. The sophisticated and intimate year-round resort, where the belle gente come to stay, is the epitome of luxury. It’s no surprise the likes of Amal and George Clooney choose it as their wedding venue.

The 24-room hotel is conveniently removed from the hustle and bustle, yet within close proximity to all the tourist attractions.

Seldom referred to as Aman Venice by locals, the hotel is affectionately known as Palazzo Papadopoli, named after the Greek family who owned the building in the 19th century.

Rooms look out onto an enclosed secret garden and offer incredible views of the Grand Canal, as does the ballroom where you can enjoy breakfast, lunch and dinner — perfect for those who wish to practice the art of dolce far niente: the sweetness of doing nothing.

Nearby, is the lively Rialto Market, where you can buy fresh fish, spices, fruit and vegetables. If you get there early enough, you’ll see crates of food being unloaded, including fish of all shapes and sizes.

From here, a short taxi ride will take you to modern art museum The Peggy Guggenheim Collection.

The collection is housed in the Palazzo Venier dei Leoni, an 18th-century palace, which was the home of the American heiress Peggy Guggenheim for three decades. She began displaying her private collection of modern artwork to the public in 1951. After her death in 1979 it passed to the Solomon R. Guggenheim Foundation, which eventually opened the collection year-round.

The city’s largest museum is the Gallerie Dell’ Accademia, in Dorsoduro. It houses an extensive collection of work from some of history’s foremost artists, including Tintoretto, Giorgione, Bellini and Carpaccio.

If you’re looking to get away from the hoards of tourists and fancy a taste of authentic Venice, check out San Marcuola, in the area of Cannaregio. Take the Strada Nova (the New Road) if walking and watch Venetian life unfold before your eyes.

Whether it’s enjoying the subtle lighting that illuminates your evening walks, observing the endless local colour, or exploring every nook and cranny of Venice, you will undoubtedly have felt like it was a worthwhile trip, full of old world charm.