Travel Review: The Many Sides Of Siem Reap - Gulf Business 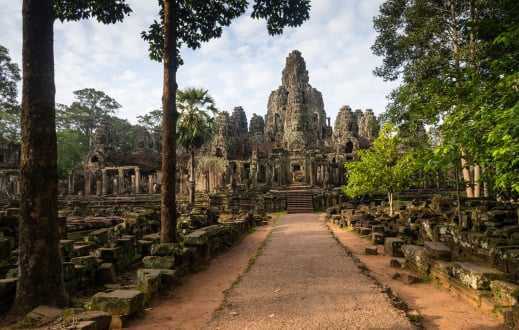 Say Siem Reap and the first – perhaps only – thought that probably pops into your head is angkor Wat, the UNESCO World Heritage site of a temple complex dating back to the 12th century, which makes up the largest religious monument in the world. Certainly that’s the most obvious appeal of this small city, but it would be a shame to visit this cultural hub of Cambodia and overlook its other charms.

Many of this sleepy city’s attractions have evolved from the tourism that the temples in the enormous angkor Wat complex attract and so, if you begin to suffer from temple fatigue after a day or so exploring the ancient site by tuk- tuk or bicycle, there are plenty of other ways to see the city. Helicopter and hot air balloon rides are one way to see the area’s most famous attraction, as well as the surrounding rice paddies and jungle, from a different perspective.

Alternatively, you can escape the crowds at angkor Wat by trekking a little further out via tuk-tuk. The temples of angkor are spread out across a 400 square metre area. One of the most popular to visit is Bantaey Srey, about 75 minutes and 37km northwest by tuk-tuk. The temple is considered worth the trip because of its intricate carvings, which have earned it the title of the ‘little jewel of the angkor temples’.

Need a break from the heat and humidity of temple hopping? angkor National museum exhibits artefacts from the angkorian era, with eight galleries of ancient sculptures and carvings which are explained via audio headsets.

But Siem Reap’s history didn’t begin and end in the 12th century. Cambodia has a violent history and, even as recently as the late 1970s the Khmer Rouge was wreaking havoc on the city, forcing its residents out into the countryside. Tourism is slowly reviving the city and a visit to Cambodia isn’t complete without learning a little about its brutal history to help better understand its slow progress in relation to other nearby tourist hotspots, such as Thailand.

The War Museum Cambodia, on Airport Road in Siem Reap displays some of the remnants of the war, including heavy armoury, tanks and rocket launchers. The Cambodia Land Mine Museum and Relief Facility, six kilometres south of Bantaey Srey, Siem Reap, continues these efforts in educating tourists about the long term effects of its war. Land mines are still a very real problem in parts of the country and, this charitable organisation and museum helps support the safe removal of the remaining mines whilst exhibiting defused mines and bombs.

But Siem Reap isn’t wallowing in its past; the city is showcasing itself as a vibrant place which, despite the increasing influence of other cultures, notably French (which is evident in the architecture, street signs and cuisine), remains distinctly Cambodian. Take a stroll through the market in the centre of town which, despite a large number of tourists, remains primarily catered towards locals, with an exciting food market section (which is best suited
to those with a strong stomach), hairdressing salons, clothing, jewellery and trinkets. The night market is a more tourist driven place to shop for locally made handicrafts, krama scarves, souvenir t-shirts and jewellery.

The city centre is also an excellent place to sample Khmer cuisine. Though Khmer specialties are less well known than nearby Thailand and Vietnam’s culinary offerings, there are a few gems to be found. Amok is the most popular dish, which is made from a type of catfish steamed in a coconut milk based curry. If the local dish tickles your taste buds, you can learn how to cook it at one of the city’s many cooking schools – in fact, many of the restaurants in the city offer a reasonably-priced cooking school where you’ll shop in local markets for ingredients before learning from Cambodian cooks how to create some of the country’s best loved dishes.

Siem Reap is also home to some of the country’s most upscale hotels, which are often built in the city’s French colonial style and offer a welcome respite from the throngs of backpackers roaming the streets.