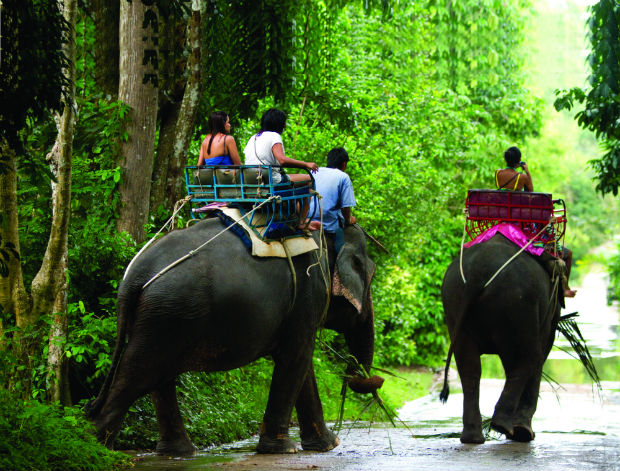 Thailand’s second largest island may lack that ‘remote paradise’ vibe many people hope for when jetting off to a Thai island, but what it lacks in quaintness, it more than makes up for in the sheer variety of things to do, places to stay and sights to see. There are few islands in Thailand that you could quite happily spend two weeks on and never once eat in the same restaurant twice.

The island is big enough to warrant its motorways and a high street at chaweng Beach with big-name chains, such as starbucks and Mcdonalds. But, don’t let this town-like feel put you off. Dig a little deeper and you’ll discover why Samui is one of the most popular of Thai islands – you may even find that untouched beach you’re looking for.

Whether it’s a chilled out resort break spent snorkelling in the gulf of Thailand, an
adrenaline packed break learning Muay Thai fighting or riding an elephant through the mountains, or a party holiday where the nights are dedicated to dancing and the days recovering on the beach, samui can accommodate it.

Unless you spend your entire break holed up in a resort, the chances are you’ll venture out to chaweng Beach, where the vast majority of the action is. The beach itself is a 5km stretch of white sand, beach bars and water sports activities, making it one of the liveliest beaches in the gulf of Thailand.

A few metres back, the high street is even more bustling, with a long stretch of boutique shops, fine dining (and some not-so-fine dining fast food restaurants) and a selection of bars that come to life at night until the small hours of the morning. if you’re looking for a refined evening’s entertainment, however, chaweng’s bars may not fit the bill.

If a more sophisticated evening is on the agenda, head to one of the more low-key, but still lively beaches of lamai, Bophut Fisherman’s Village or Maenam Beach, which have a more languid selection of beach bars in which to chill out over a cocktail or two.

During the daytime, if you’re itching to get away from the beach to explore, samui’s size means you can easily fill a whole day with non-beach related activities at the centre of the island is a mountain called Khao Pom. While it’s not navigable, the surrounding jungles and waterfalls make for some spectacular scenery.

Put aside at least a day or two to visit these waterfalls, such as Had Lin and Namuang, which are particularly incredible during and after monsoon season (from August to December is best), and quieter beaches. One of the most popular sights is Hin Ta and Hin Yai, which are rock formations resembling, well, male and female body parts. Local legend has it that a shipwrecked couple were washed ashore and the island has remembered them with these distinctive rocks. You won’t have to travel far from Lamai, another popular beach, to find this rather unique attraction.

The region’s diving is also spectacular. Whale sharks and turtles are regularly sighted off the coast, and a huge selection of diving schools mean even if the only experience you have with underwater exploration is cleaning out your bath’s plughole, you’ll soon be opened up to a whole new world. Muay Thai is another very popular activity and one of the best-known schools in the country, Tiger Muay Thai, is based in Chaweng Beach.

Getting around an island this size is perhaps the biggest problem for intrepid explorers (not so much for those who just want to laze by the ocean for their entire holiday). Hiring a motorbike is a cheap and easy way to get around the island but, the roads can be unsafe with potholes and dangerous drivers so taxis and songteaws (a kind of pick-up-truck taxi), though not the most economic way to destination hop, are certainly the safest way to get around.