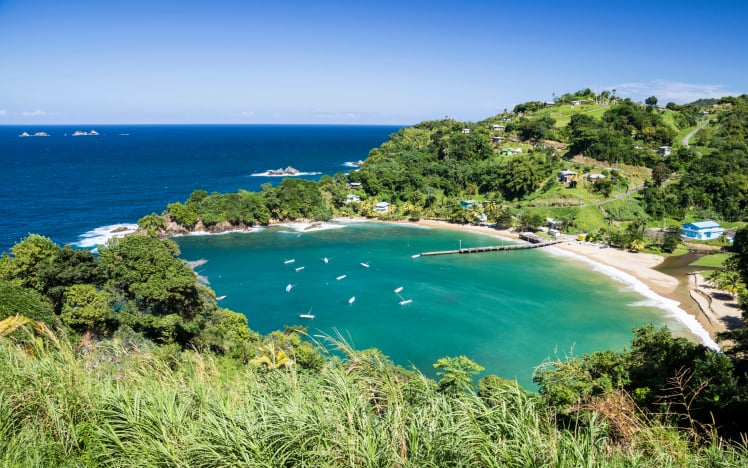 Trinidad and Tobago are the ultimate power-couple. Envied by the surrounding sunny isles, these Caribbean gems have what it takes to win over even the most jaded travellers.

While Trinidad runs wild, with her lush nature centres, rich bird sanctuaries, and haunting caves, Tobago, on the other hand, lays out the powder-white carpet. The cool blue waters hold enchanting sea-life, legends of a fountain of youth, and the routes to hidden coves. Together, they make for the trip of a lifetime.

Port of Spain, in Trinidad, is the point of entry for flights from this side of the world. Step out of the Piarco International Airport, and you’re likely to walk into a sun-kissed day, cooled by a teasing breeze.

While one can describe the region, it’s impossible to paint a picture of a ‘typical Trinboganian’. The nation’s history, riddled with European colonialism, West African slavery and Indian indentureship has led to an exotic people. But differences in race, religion and colour have disappeared into the melting pot that is Trinidad and Tobago.

The result – mash-ups such as ‘chutney music’, where Indian ragas meld with European and English lyrics; cuisine that consists of fiery Indian spices, washed down with colonial love of tea, and a side of croissants; and a culture that cannot be replicated in any other part of the world.

But as locals quip, there is one difference between the two islanders. “A Trinidadian will advise you to bring comfortable shoes, while a Tobagonian will insist you pack in beach-wear,” they say.

OF WOODS AND CAVES

With that sage advice, my Trinidad adventure begins at The Asa Wright Nature Centre. Once a citrus-coffee-cocoa plantation, Asa Wright is today a bird watcher’s paradise, spread over 270-odd acres of forests. Its unique combination of the Caribbean and South American flora attracts 159 different species of birds.

Walk into the centre and find yourself in a charming colonial mansion. The dark-wood verandah comes adorned with red-tipped water feeders to attract winged creatures and overlooks acre- upon-acre of the lush forests. You can simply sit here, enjoying a cup of afternoon tea or spiked-punch, while tuning into the melodious cooing, as colourful birds flit through the air.

Or sign up for a tour that takes you deeper into the woods. Under a canopy of green, as the smell of the Earth rises at the hint of a shower, and a mist hangs in the distance, you may just spot a variety of hummingbirds (as many as 14 different types have been known to visit this reserve), the blue headed parrots, purple honeycreepers, and more.

Next, take the ‘Down de islands’ trip, aboard a water-taxi, to Trinidad’s offshore isles. The most popular of which is the Gaspar Grande island known for its Gasparee caves.

The first sight of the limestone cave system is daunting. It’s like peering into a ravine, where colonies of bats nest in corners, with the occasionally stray flapping overhead. A stairway, with a hand-rail, makes for an easy descent, even as the lights dim with every step you take.

Stalagmites and stalactites add to the mysterious air, while the play of light casts shadows on the limestone. Let your imagination run wild and the natural features could seem like the profile a coveted Hollywood star, or a miniature of your favourite fantasy hero.

Make it to the base to find a mysterious pool that’s shallow enough to lure the most timid swimmers. To take a dip in these cool waters is a surreal experience – the unique lighting promises a hint of the ethereal to your albums.

Having explored the caves, it’s time for the swamps. Caroni Swamp is a wetland with hectares of mangroves and marsh, intertwined with brackish lagoons. It promises you nature at its naked best.

Sign up for a boat tour where the guide dangerously sits atop the bow of the rudimentary boat as he points out the many different species of birds, animals and plants that call this swamp home. Spot tree boa constrictors wrapped around branches overhead, alligators lazing at the intersection of land and water, and fishes that jump in and out of the water.

But the main attraction is the national bird of the island, the endangered Scarlet Ibis – a bird that’s a glorious, glowing shade of red. At sunset the birds head to their nests, and seem like bright-red bulbs amidst deep-green mangroves. The scene is absolutely magical, and an apt ending for a trip through Trinidad – an island often described as ‘Paradise to Earth’.

Not all that is fun is on Trinidad though. Make some time for Tobago too, the perfect descriptor for which comes from the local slang-word, ‘limin’, or the art of idling. What better place to perfect this art than against the backdrop of sun, sand and sea.

Jump into Tobago by signing up for a coastal boat tour though with one-too- many water bodies on offer, it’s tough to choose where to go. But a full day at sea should help you glimpse the very best.

Start with snorkelling or diving in one of the most accessible reefs in the Caribbean, the Buccoo Reef where corals in psychedelic colours – starlet corals, waving soft corals, etc – greet you underwater. For the non-swimmers, a glass-bottom boat does the trick.

Then head to Cotton Bay, which is a hidden cove accessible only by sea. It could be mistaken for the setting for the TV series, Lost, with not another soul in sight. The only sounds you hear are the rustling of trees and the chirping of birds. No man-made structures exist – not as much as a rest room. It’s the perfect place to enjoy a private beach, without shelling out the money.

In contrast, Nylon Pool is filled with people and music. One of the most popular spots on the island-nation for a pool party, it’s here that boats anchor for hours on end, while people jump into the shallow waters, beer in hand, even as Soca tunes waft from the vessel.

But the Nylon Pool is more than party haunt – it is the fountain of youth itself. Legend has it that the waters contain magical properties that can turn the clock behind. Locals warn, “Stay too long. And you could leave as a baby!”

There is a grain of truth in the legend – this pool is formed out of a natural hollow in the Buccoo Reef. This unique formation comes with a high concentration of minerals, making it an unrivalled natural spa. And even if the pool doesn’t work on the skin, it’s guaranteed to work on the weary spirit. So, whether you’re a solitude-seeker, a hedonist, an avid diver, or even a non- swimmer, Tobago has a place in the sun, just for you.