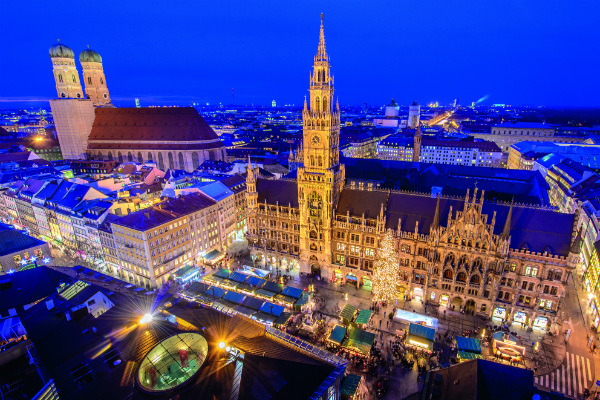 The Bavarian city of Munich has long held an allure with travellers the world over for its unique taste of German culture and tradition.

But while the focus of many visitors may be the Oktoberfest celebrations, there are also plenty of reasons to visit outside of September and October, regardless of your leanings or interests.

A good place to start any visit is the city’s central square, known as the Marienplatz, where on top of taking in some quite breath-taking neo-gothic architecture you can also enjoy a lesson in history.

The square itself is named after a column erected at its centre in 1638 to mark the end of Swedish occupation during the Thirty Years’ War and it still stands to this day. Surrounding it are some of Munich’s most iconic structures including the old city hall Altes Rathaus on the East side and the towering new city hall Neues Rathaus on the northern side.

If you’re lucky enough to visit from November 27 to December 24 it is also host to the famous Christmas Market. Expect advent music and dozens of craft stalls offering Christmas decorations and traditional seasonal treats like chestnuts, gingerbread, stollen and handmade plum-almond figures known as Zwetschgenmandl. All towered over by a delightful German Christmas tree with roughly 2,500 candles.

Outside of this seasonal attraction, tourists flock to the square for another reason, the world famous Rathaus-Glockenspiel, which was added to the new town hall as part of a second construction phase in the early 20th century.

Each day the 32 life-size characters that are part of the mechanism tell stories from Munich’s history including the marriage of Duke Wilhelm the fifth to Renata of Lorraine and the cooper’s dance, which according to myth was performed on the streets in 1517 to symbolise perseverance during a plague. The 12-minute show starts at 11am and 12pm each day and draws crowds from far and wide.

If you want to get closer to the action you can climb the ornate city hall tower (thankfully an elevator is available) to take in the surrounding city including the nearby Frauenkirche Gothic cathedral with its iconic twin towers. The towers were erected in 1488 but were not completed until 1525 due to a lack of funding that eventually meant spheres were chosen rather than the tall open spires typical of designs at the time. Inside, visitors can catch a glimpse of 14th to 18th century artwork and a tomb monument to Holy Roman Emperor Louis IV, but a more unusual attractions is the devil’s footprint – a black mark that survived Allied bombing during the Second World War, said to show where the devil stood when he ridiculed the church for its lack of windows.

Taking in all this history will no doubt build an appetite and fortunately there are plenty of dining options near the Marienplatz to choose from. Among the most famous is traditional Munich restaurant Ratskeller, located in the cellar area of the new town hall. Inside you can expect hearty food and service, with some particularly wholesome meat dishes including sausage schnitzel, Munich wollwurst and Bavarian roast duck dish entenbraten. Expect fine cuts with classic Bavarian potato dumplings and red cabbage on the side and a healthy splattering of gravy.

For a more open air experience and some tasty gourmet street food options you can head to the city’s 200-year-old farmer’s market, Viktualienmarkt, to the south or head north to Spatenahus an der Oper.

The Bavarian restaurant offers rustic and more contemporary dishes as well as a charming exterior terrace with views of the Max-Joseph Platz square. 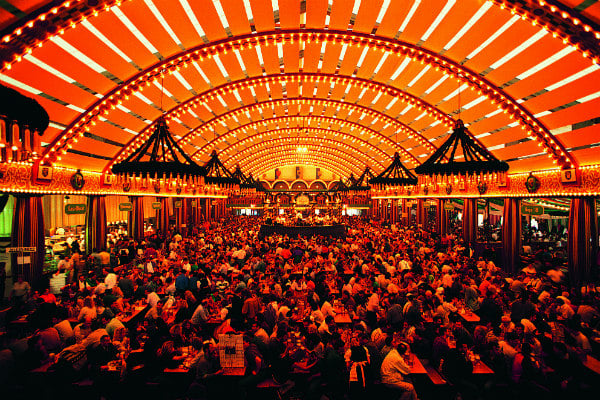 The square itself was constructed alongside the National Theatre on its east side, which opened in 1818, and is centred by a monument to former Bavarian monarch King Maximillian Joseph. It was only revealed years after his 1825 death due to the ruler’s apparent objection to being remembered sat down.

If you’re into shopping the nearby streets are home to a vast selection of luxury brands from Louis Vutton to Prada, Omega and Montblanc (with more traditional high street brands located off of the Marienplatz), while culture and history buffs will certainly want to stop in the nearby Munich Residenz, the former royal palace of the Wittelsbach monarchs of Bavaria.

Inside Germany’s largest city palace you can spend hours learning more about the various courtyards and buildings that were added over its history, starting in 1385, with some spectacular rooms, gardens and royal collections including the breathtaking Hall of Antiquities.

Alternatively, if you want to learn more about Munich’s more recent history, a 15-minute journey on the city’s underground will take you to the museum and headquarters of world famous automotive company BMW.

Inside you can get a unique insight into the company’s past, starting from its origins as a producer of aircraft engines. BMW’s journey into motor bike manufacturing in 1923 and its first car five years later is detailed through interesting vehicle displays that take you through to the modern day. Petrol heads could easily spend a day among the array of classic and rare vehicles including unique concept cars, race-winning classics and even a restored 507 purchased by Elvis during his conscription in Germany as part of the American Army.

Across the road you will find another of Munich’s more modern attractions, the Olympic Park, with highlights including the stadium, an aquarium, a 190m observation tower and the Walk of Stars featuring handprints left by famous faces from sport, music and entertainment.

Alternatively, another sporting attraction stands to the city’s north – world famous football team Bayern Munich’s Allianz Arena stadium. A behind the scenes tour on match days offers a unique insight into the club’s history from its foundation in 1900 to more recent treble trophy success in the 2012-2013 football season.

Naturally though, it is the city centre that is the place to be in the evening and what better place to finish the day than the Munich Hofbräuhaus, the city’s most famous brewery. Waiters and waitresses in traditional dress serve patrons across the 16th century building’s three halls to the sound of a traditional German band and there are plenty of non-alcoholic drinking options if you just want to soak up the merry atmosphere.

Should the loud music and crowds prove too overwhelming, a good alternative is Haxnbauer around the corner, which offers similar Munich cuisine including a delicious veal knuckle, in a more intimate setting that dates back to the 14th century.

Either way you are sure to get a taste of history that will stay with you long after you’ve flown home.