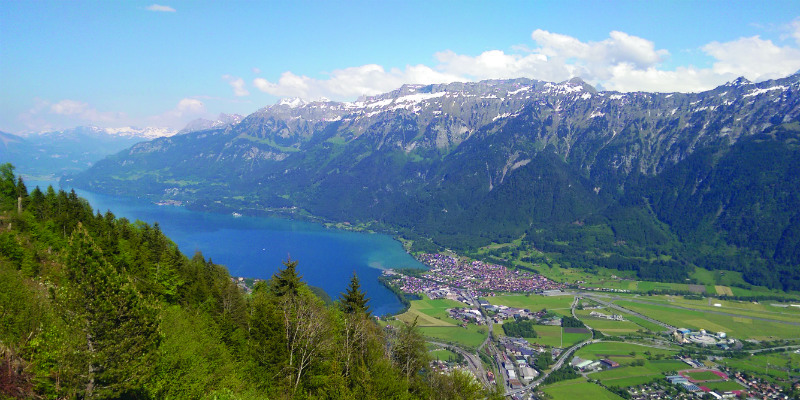 It feels as though Switzerland has a bit of everything.

From the foothills of Bernese Oberland to Lucerne’s lake-side promenades, you can revel in the sounds of Swiss history, savour the crisp fresh air and marvel at the staggering sights of its unspoiled charm.

Its cities all offer something unique, but also something unmistakably Swiss – exemplified by three of its most popular destinations, Zurich, Lucerne and Interlaken, which can be visited with ease in one go.

This wealthy city might be big on banking and chocolate but there are other elements making it tick.
Its authentic village traditions, cultural heritage and natural beauty are also of national importance.
At the epicentre of its luxurious natural charm is the magnificent Dolder Grand hotel, where scenic wonders of Zurich come into focus. And what is good enough for the likes of Prince William, Hilary Clinton, and Leonardo DiCaprio, is good enough for most of us.

With its seductive garden views augmented by a breath-taking backdrop of snow-capped mountains – a meticulous masterpiece in itself – it is hardly surprising the hotel attracts such affluent clientele.

It was also the perfect setting for Hollywood Blockbuster, David Fincher’s The Girl with the Dragon Tattoo, starring Rooney Mara.

For the ultimate escape, hop on a complimentary e-bike and conquer the hotel’s surrounding acres of lush valley trails, tranquil paths and slopes. The bike’s electric motor helps you power up the steepest hills, making it an easy and enjoyable ride.

Zurich’s cultural heritage is just as valuable as its natural wonders, having attracted many notable artists in the 19th and 20th centuries. The hotel itself houses an impressive art collection in collaboration with Galerie Gmurzynska including Andy Warhol’s Big Retrospective Painting and Salvador Dali’s 1960 piece – La Brouette.

The city owes much of its cultural splendour to the legendary Dada art movement founded in the narrow cobbled streets of the city in 1916.

It has become a more vibrant cultural hub with the opening of FIFA’s World Football Museum and Europe’s first physical and virtual museum dedicated to the digital arts.

Culinary classes dotted around the city are also a big hit among foodies, such as The Team Cooking Class. Here you can enjoy making tantalising meals under the direction of renowned chefs before devouring them.

While the Swiss rail network includes some of the most dazzling routes on the planet, meandering through twisting roads by car makes the picturesque journey all the more palpable.

From Zurich, drive to Mount Rigi – Queen of the Mountains offering magnificient views of Lake Lucerne, and the Alps.

In Lucerne, walk along Chapel Bridge with its Water Tower where you might be greeted by a performance from a Swiss alphorn player. You will soon notice the town is sprinkled with historic houses, busy outdoor morning markets selling fresh fruit and vegetables, and stylish cafes.
The romantic lakefront promenade on Lake Lucerne is best enjoyed with a backdrop of clear skies before heading to the popular Swiss Museum of Transport.

From Lucerne to Interlaken, you will come across the reassuring sound of Swiss cowbells tinkling away in the distance via Brunig, drowned out by the majestic roar of waterfalls.

Feast your eyes on pockets of alpine beauty along the way while roaming through quaint villages, and soak up the sights of Lake Brienz and Lake Thun that shimmer with beautiful turquoise and emerald hues.

Take the vintage funicular to the highest point of Interlaken – Hardler Kulm – and enjoy sights of unhindered bliss. From here, the scent of wild pine is better than any car freshener you will come across.

Head further south to experience the high-alpine world of Jungfraujoch – the largest glacier in Eurasia and a UNESCO World Heritage Site.

A guided tour in a comfortable motor coach will take you to the splendid mountain world of Bernese Oberland. Travel in a modern cogwheel train up to Kleine Scheidegg, between the Eiger and Lauberhorn peaks.

Continue to the Jungfraujoch for endless snow and ice, visit the ice palace and experience the breathtaking panoramic views of the Aletsch Glacier – Europe’s longest ice river.

The trip back down to the valley takes you to the equally stunning mountain village of Grindelwald, rounding off a tour full of outstanding beauty – both natural and man-made.