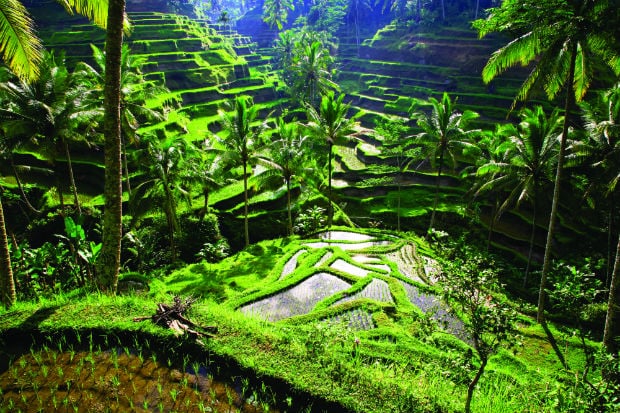 While Ubud isn’t the capital of bali, it’s the place many people flock to first when they touch down on this lush green island thanks to its rich cultural history which, unbeknownst to many, goes back far before elizabeth Gilbert wrote the ‘love’ part of her self- indulgent novel ‘eat Pray love’ about the pretty rice-field surrounded town.

But while you’re more likely to find middle aged women sipping acai juice and nibbling on tempeh salads after their yoga class at the Yoga barn or Radiantly Alive than you are to find a Javier bardem type to sweep you off your feet, there’s no denying Ubud’s romance and charm.

Bali is a hindu island and barely a week goes by without some sort of celebration going on; including Galungan, a holiday when people decorate bamboo poles with flowers, cakes and fruit and dress in their best clothes to symbolise the victory of good over evil and nyepi, when silence and inactivity is practiced across the island to help banish bad spirits.

But most celebrations are colourful and exciting and, in Ubud, the reminder of the importance of their faith is everywhere; it’s in the canang sari, the flower offerings in banana leaves that you’ll find along every pavement and the pretty temples scattered throughout the town that waft with the smell of cinnamon cigarettes.

A million miles away from the surf culture and frenetic nightlife of coastal towns such as Kuta, the tranquility of the staggered rice paddies and the strong sense of spirituality in Ubud provides the perfect backdrop for the artistic scene that it’s so well known for.

The likes of Charlie Chaplin, noel Coward and h.G Wells have all visited the town and helped cement its reputation for being bali’s cultural heart.

Local arts include wood carving and silverware, which are available in the town’s boutiques and markets. But its arts society spreads far beyond these traditional crafts, with one of the highlights of the cultural calendar being The Ubud Writer’s and Reader’s Festival, held every October, which is South East Asia’s largest and best known literary festival.

The offshoot of attracting an artsy, thoughtful crowd is that businesses such as boutique homestays, yoga studios and organic cafes are thriving.

If you have any type of special diet, whether it’s vegan, organic or paleo, you can be sure that someone in Ubud can cater to you. The number of organic and vegetarian cafes is staggering – you could eat a different raw – yes, raw – dessert in a different café every night if you wanted.

Soma, with its cacao and berry smoothies and Alchemy with its raw super food parfaits and other live-food treats are some of the most popular food outlets in the town, though there are plenty of others with views over the paddies.

It’s hard to overstate the beauty of Ubud and the surrounding area. Perhaps the best way to appreciate it is to take a short hike to Sari Organik, a restaurant with a branch among the bright green rice paddies with views of Gunung Agung, the highest peak – and active volcano – in Bali.

Or, if you’re feeling a little more active, hire a bicycle from one of the guesthouses in the area, or take part in an organised cycle tour to explore the surrounding villages, staggered paddies, intricate temple architecture and local way of life.

One stop that should certainly be on your list is Monkey Forest Road in the heart of Ubud. This nature reserve is home to nearly 350 crab-eating macaques that roam about the roads and offer some great holiday photo opportunities!