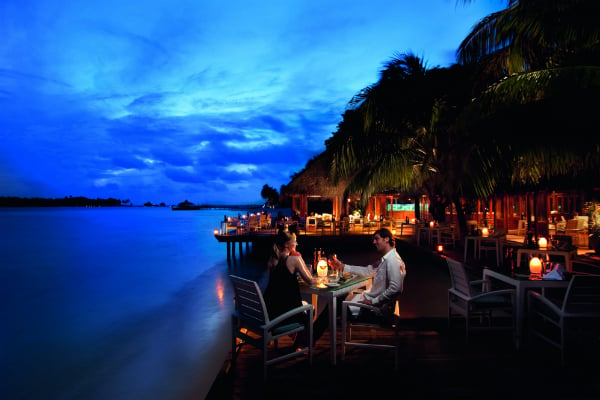 With sustainability front of mind for hoteliers as much as holidaymakers these days, Tracey Scott heads to one of the world’s most celebrated archipelagos to find out if luxury travel and eco-tourism can work in unison

It seems to make sense that an area so famous for its greenery and wildlife should be a leader in sustainable tourism.

So it’s little surprise that with its white beaches, blue lagoon, sprawling reefs and tropical trappings, the Maldives archipelago is doing just that – aiming to protect its natural wonder while keeping it open to visitors searching for an exotic paradise.

With 100 of the Maldives’ 1,200 islands having been developed as tourist resorts, it might be difficult to find the right fit for your particular eco-sensibilities, but my stay at the Conrad Maldives Rangali Island provided a strong example how a no-nonsense sustainability strategy is being translated into a five-star tourism experience.

Here sustainability is subtle rather than showy. The owners, resort designers and staff have cleverly infused green elements across the property so as not to interfere with the Maldivian experience that wanderlusters have come to know and love: one of luxury, privacy and grandeur.

Upon arriving at the resort, it is the local scenery that takes centre stage. Standing in the middle of the 500-metre footbridge that connects the two islands – the adult-only Rangali Island on the left and the family-friendly Rangalifinolhu Island to the right – the clear waters, powder-white sands and famed over-water villas are as striking as the Instagram posts make out.

It is these environments that provide the backdrop for my four-day jaunt, which kicks-off as soon as I dump my bags in my over-water villa on the adult-only island. Spacious, open-plan and with its own plunge pool, the thatched-roof villa is as tranquil as the view outside.

Unpacked and ready to roam, I devise my itinerary around three activities the Maldives has down pat – diving, downtime and dining.

The resort has an expert team of divers on hand to ferry amateur and seasoned snorkelers out to the 40-plus dive sites that surround the twin-island retreat, which boasts an 80 per cent success rate in spotting whale sharks – the largest fish in the world and one that has been classified as ‘vulnerable to extinction’.

Experienced divers should grab their flippers and mask from the on-site dive centre and join an excursion around the South Ari Atoll, where dolphins and manta rays are also common sights.

Beginners, meanwhile, might be better suited to a snorkel around the resort’s house reef – an accessible and colourful marine thoroughfare near Rangalifinolhu Island – before putting on their game face and heading into the big blue.

In terms of sustainability, the hotel has well-trained guides lead the tours, which are limited in frequency and in the number of guests per outing. It has also collaborated with conservation charities to assist them in their research into local marine life. In previous years, the Maldives Whale Shark Research Programme (MWSRP) has set up camp at the resort to conduct research into the endangered and little-known whale shark. 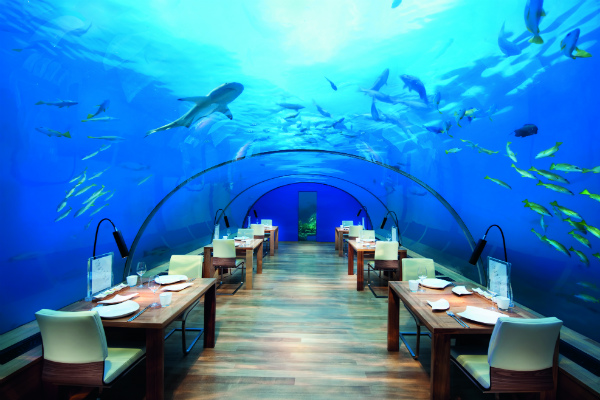 While the programme is no longer affiliated with the resort, the staff have cleverly incorporated what they have learned from the MWSRP into their own tours for guests. The result? A three-hour excursion that is as mindful as it is exciting.

Equally connected to the environment is the resort’s adult-only spa village on Rangalifinolhu Island. Designed by Thai architect Lek Bunnag, the destination spa works with nature, not against it. As such, the local environs are etched into every detail of the spa’s design and delivery, with local materials used across its 21 over-water treatment villas, and al fresco restrooms looking out onto the turquoise waters below.

For downtime with a difference consider a spot of stargazing. According to the resort’s stargazers, near-zero light pollution in South Ari Atoll and a calendar full of clear skies makes the island a world-class venue for stargazing. Nearly on par with astro-tourism hotspots Atacama Desert in northern Chile and the Arctic Circle, in fact.

The sustainable theme continues when it comes to food in many parts of the Maldives. The hotel’s biodynamic Madhoo Spa Restaurant is inspired by the five basic elements – air, water, fire, earth and plant – and uses many of the resort’s homegrown ingredients.

In line with the resort’s wider sustainable tourism programme – which includes banning the use of all non-biodegradable plastics and cling wrap on the resort as well as reducing energy and water consumption – the restaurant uses produce from a 3,000-square-foot hydroponics herb garden. The garden and its 31-strong team provide all 12 restaurants and bars on the dual-island – including Ithaa, the Maldives’ first underwater restaurant, and Ufaa by Jereme Leung – with a range of fresh herbs and vegetables.

Since its launch in 2014 the garden, which costs less than $300 per month to run, has reduced dependency on imported produce and saved the resort $24,000 annually.

So successful is the garden that the hotel has installed a hydroponics system in a school on nearby Dhigurah in a bid to teach children in the Maldives about sustainable farming and food. After two successful harvests, the students have started to sell the crops to local guesthouses, with the proceeds being used for school development projects.

Other energy-saving measures have also been incorporated into the island’s aesthetics. One case in point is that LED lighting has been cleverly introduced to enhance the ambience in public areas, including Koko Grill, an intimate sunken restaurant with room for 12 diners. As guests devour a five or 10-course Japanese menu, it is the simple yet sustainable lighting that beautifully sets the tone at this al fresco eatery.

Having ticked off the three D’s – diving, downtime and dining – its easy to be impressed by the merging of sustainability with luxury – especially when overindulgence and excess are traits often associated with holidaying in the island nation.

With tourism making up more than 40 per cent of the economy in the Maldives – about triple what it was 25 years ago – and the World Bank stating that environmental sustainability is a fundamental development challenge in the country, it is up to hoteliers to make the Maldivian experience one that encourages mindfulness and meaning rather than harmful holidaying.