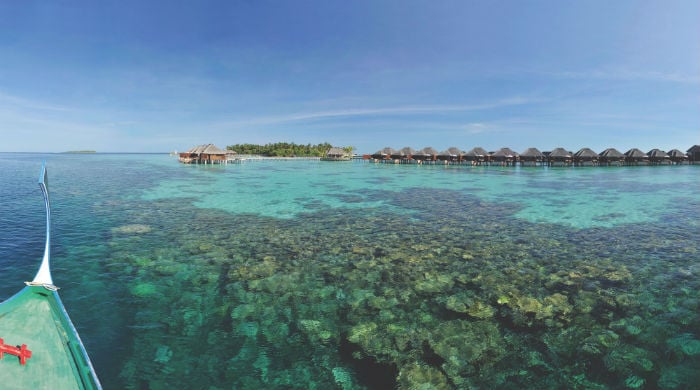 The first paying tourists visited Maldives in 1972 and returned home with talk of an island nation with blue seas and white sands like no other. Since then, Maldives has been considered the quintessential island paradise.

That title is not off the mark. The wonders of waking up in one of the island clusters’ famous wooden overwater bungalows with nothing but endless clear skies and crystal waters to behold is something that must be experienced to be believed.

This feeling of isolation has become one of the main appeals of a Maldives holiday, with many of the resorts located miles from the few population centres.

For those looking to truly get away from it all, some of the best island resorts are located in the vicinity of Kaadedhdhoo to the south, accessible via a 50-minute plane journey from the capital Male’s domestic airport.

After walking from the runway and through the tiny terminal building at Kaadedhdhoo airport, guests are ushered down a coconut tree lined road to the docks where speedboats await to ferry them to their respective resorts.

One of the more recent entrants here is Ayada Maldives, a Turkish-inspired resort popular with couples, around 45 minutes away via boat. Walking down the island’s quiet jungle paths, city life feels a world away, while its surrounding coral reef lures snorkelers with a truly breathtaking variety of tropical fish, only seconds from the shore, or steps for those staying in the overwater bungalows.

Relaxation is the name of the game and, when not sunbathing, snorkeling or exploring the beaches, spa treatments, including a private Turkish hammam, the island’s shisha lounge, and shore side dining top off the easy living romantic setting.

The standard of food, as with most island resorts is high, with multiple venues to choose from and both Western and Asian options. Local dishes, usually consisting of the staples of coconut, fish and starches also add some Maldivian flair to most menus, and are certainly worth tasting if you enjoy curry or seafood.

For those that find the sheer isolation, and indeed cost and travel time, to the south too extreme, resorts surrounding Male city offer a greater balance of civilization and solitude.

Sheraton Maldives Full Moon Resort & Spa, some 15 minutes from the airport via boat, is catered to a wider demographic and price range, while still boasting the white sand beaches and azure waters seen elsewhere. As one of the more established players, it also boasts many of the features the islands have become famous for, including the overwater bungalows, beach villas and outdoor showers.

The Sheraton’s sunset Dolphin Cruise is a particularly enjoyable activity and unlike other parts of the world, the chances of disembarking without having seen your fill of the creatures jumping out of the blue sea and maneuvering near the boat is low.

It is also one of an increasing number of Maldivian resorts looking to cater to water sports enthusiasts, with parasailing and jet skiing topped off with some great diving spots in the vicinity for those looking to see Maldivian marine life up close.

While many will be content with easy island living, should you be looking for a more cultural experience, a day trip tour to Male is an obvious choice. For those that do decide to take the boat to the capital, sights include the Hukuru Miskiiy Mosque, an ancient place of worship with intricate coral stone carvings dating back to 1656, and the Mulee Aage Palace, built by Sultan Mohamed Shamsuddeen III for his son in 1906, and later becoming the official residence and office of the Maldivian President.

A short walk across the city, down roads dominated by swarms of scooter riding locals, is the Male Fish Market, an experience for both the eyes and the nose. While usually bustling, the pace picks up mid-afternoon when the dhonis return with their day’s catch, mainly consisting of tuna fish, and lay it out on the tiled floors. There are also fruit stalls nearby, selling bananas, mangoes and other better smelling foodstuffs for those looking to escape the whiff of fish.

And when you are done with the crowds, don’t fret, as a boat is almost always only a few minutes away to whisk you back to your island paradise.