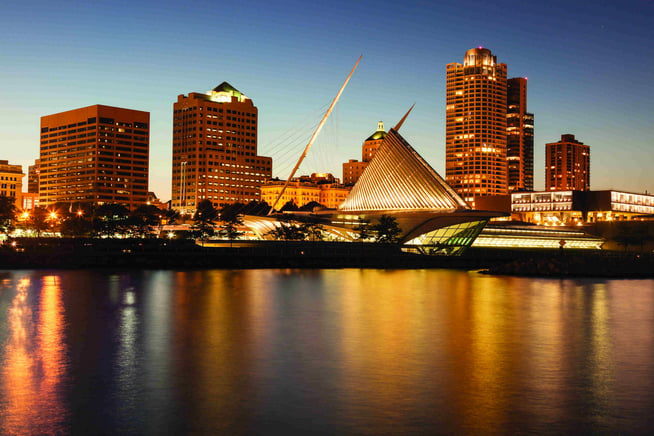 When the name Milwaukee is mentioned, the first thing that comes to most minds is a scene from British hit Love Actually. In the film, unlucky-in-love Colin (played by actor Chris Marshall) decides to fly to the United States in the hope that his accent will improve his luck with the ladies. He lands in Milwaukee and immediately heads to a nearby bar where his plan works in more ways than one – a group of beautiful women are soon swooning over him.

Although the reality might not be quite the same as the silver screen (those looking for a direct international flight will be out of luck), Wisconsin’s largest city has a unique charm that is sure to leave you wanting to come back for more. Since the city’s incorporation in 1846, it has become known for many things. Among them as the self proclaimed beer capital of the world following an influx of new German residents after the 1848 revolutions in Europe.

Some of America’s best-known beers, including Miller, Pabst and Schlitz, were founded in the city or have based major breweries there and today it is home to a thriving craft beer scene. You can sample these local brews in many of Milwaukee’s bars and restaurants. Some – like the Hinterland Gastropub – even produce their own. Or better still, set aside an hour or two to take one of the several brewery tours.

The riverside Lakefront Brewery tour is recommended for an amusing insight into the ins and outs of a microbrewery, all with some of the local produce in hand. For a different experience also head down to the Milwaukee Brewing Company. The tour is more of a drinking session than a learning experience but it is a great way to sample the huge variety of craft flavours on offer.

Outside of its beer, another of Milwaukee’s and indeed Wisconsin’s famous exports is its food. Local dishes in the ‘dairy state’ tend to be a little on the unhealthy side but make for great comfort food. Make sure you try the cheese curds in particular.

You can sample gourmet local produce at the Milwaukee Public Market. Or for something a little different, stop off at one of several German eateries celebrating the heritage of the city’s early migrants. The Bratwurst sausage is particularly good and can be found in different varieties across the city including as the snack of choice at Miller Park – the stadium of local baseball team the Milwaukee Brewers. A recent tradition sees the team’s sausage mascots race before the seventh inning at home games to the cheers of the crowd.

Once you have had your fill of beer and sausage, it may be a good time to walk off some of those calories. Fortunately Milwaukee has a lot to offer in this department with several green areas on the shores of Lake Michigan. Up the city’s North Lincoln Memorial Drive, you can also find Bradford Beach. Although it would be fair to say the water temperatures, even in the summer, are not quite as welcoming as the Arabian Gulf.

Just above the beach is Lake Park. It was designed by Frederick Law Olmsted, the man also responsible for Central Park in New York. He believed that nature had a restorative effect on citizens and this is reflected in the more natural landscaping. There are also several key landmarks including one of the last remaining Indian mounds in Milwaukee and the North Point Lighthouse, built in 1855.

Closer to downtown, another of Milwaukee’s major coastal attractions is the art museum. Sitting atop the building is the iconic Quadracci Pavilion, created by Spanish architect Santiago Calatrava. It contains an award winning wing-like structure that opens during the day and closes at night. Stopping for a picture is a must. The museum was also recently expanded with a new building designed by local architect James Shields providing extra floor space for the more than 35,000 works of art.

Alternatively, further inland you can learn the history of one of Milwaukee’s more surprising exports, Harley Davidson. Childhood friends William Harley and Arthur Davidson founded the world famous motorcycle manufacturer in the city in 1903 and today it plays host to a museum in the company’s honour. The experience is surprisingly compelling, even for the nonpetrol heads. And there is a huge variety of motorcycles on display from past to present. Make sure you stop for a cheesy picture on one of the bikes at the end.

Then what better way to end the day than with a Blood Mary. Many of Milwaukee’s bars offer their own take on the cocktail with sausage, cheese, pickle and more to be found on the side of the glass. After a few hours, you may even find yourself putting on your best British accent to try to charm the locals – just as Colin did in Love Actually.