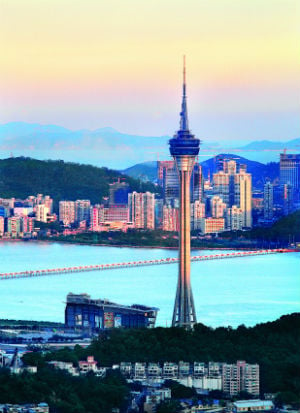 What’s the best way to check out Macau? Given its miniature size, you could drive right through it. Or for something more spectacular, hop into a super-fast elevator that makes your ears pop, shoot up to the 61st floor of the tallest building in Macau – the Macau Tower, then, slip out onto a narrow walk-way, suspended 1,109 feet in the air with only a harness to keep you safe.

Expect your instructor – a local lad who has learned to say ‘have no fear’ in 13 different languages to get you to run across the slim trail, sway off the edge and fly high above the city for a few seconds (which could seem like a lifetime), before you find your footing again. Rest and repeat, until you hear the drums.

For the uninitiated, sky drumming involves learning how to drum in sync, while you sit down on the walkway, in the clouds. It may seem ridiculous to play a percussion instrument when all you want to do is rush back indoors to safety. But, the drumming instructor explains, as he rips off a quote from Jack Kerouac, “When the music hits you, you feel no fear.”

You may fumble at first, but eventually most groups catch a tune, drowning out the sound of the wind, and eventually fear itself. For a brave few, this sets the stage for the next adventure – the world’s highest commercial bungee jump at 764ft.

Such adrenalin infused adventures can work up an appetite and Macau has some excellent cuisine inspired by its unique Portuguese and Chinese heritage. If it’s street food you crave, the many lanes of Taipa village – where samples are offered aplenty – will have you piling on the pounds even as you try to walk them off. Aromas waft through the by-lanes, making it impossible to resist the tasty treats.

Some of the local delicacies include a rather oddly-named, yet lip-smacking African chicken – where chicken is marinated, then roasted over coals with fiery piri-piri sauce; honey-glazed beef jerky – strips of beef are brushed with pure honey; egg tart – where a crusty, pastry shell comes filled with sinful, egg custard, complete with a caramelised top layer; and almond cookies – melt-in-the- mouth biscuits with a nutty flavour.

While grace is generally said before meals, it’s never too late to say a prayer. And Macau comes dotted with many ancient shrines and temples, mysteriously cloaked in legends.

The A-Ma temple is possibly the oldest temple in Macau dating back to the 15th Century Ming Dynasty. Legend has it that a beautiful young girl named ‘Ama’, wanted to make her way from the north of China to Guangzhou. But at a time when women didn’t have many rights, boat owners refused to transport her to the other side.

A poor fisherman in a run-down boat took pity on her. As they made their way across the waters, a terrible storm took shape, killing most at sea. But Ama and the kind-hearted fisherman found themselves shipwrecked on an uninhabited island. And just as the gorgeous girl stepped onto the shore, a bright white light surrounded her, and touched her very soul. She was instantly converted to a goddess.

The wonder-struck fisherman built a temple at the spot where the miracle occurred, and ever since sailors and sea-farers come here to seek the blessings of A-Ma before a long journey at sea.

The temple itself showcases traditional Chinese architecture, with a small pagoda that can be sighted from a distance, while figures of stone lions grace the entrance. Happy hues such as reds and greens frame the main doorway, while at the entrance sits a huge rock with an engraving of the boat that brought the goddess here. It is believed that burning joss sticks here ensures not just a safe journey across the seven seas, but also good fortune, for life.

Yet another spiritual abode that must not to be missed, are the ruins of St. Paul’s, which date back to the 17th century and carry a UNESCO heritage tag.

Having burned down in a massive blaze that consumed both St. Paul’s Collage and the Cathedral of St. Paul’s, today all that remains is an intricately carved gateway opening into a vast open space. This facade was built by Japanese Christians, (who had been exiled from their homeland by religious extremists), along with local artisans.

The two groups worked under the watchful eye of the Italian Jesuits who financed the project when Macau was part of the Portuguese empire. The result is a stunning mish- mash of architectural styles and cultures – biblical images merge with Chinese motifs and Japanese chrysanthemums adorn Jesuit figures.

Macau is often referred to as the ‘Monte Carlo of the Orient’ and the gaming industry accounts for close to 45 per cent of the GDP of this tiny region. Cotai Strip in Macau is where the action is, but before you dub it a non-family vacation spot, head to the Sheraton Macau Hotel, Cotai Central, which is also the largest Sheraton in the world.

While the property does come with two casinos, it also boasts 20 different eateries that offer a wide selection of cuisines, over 100 retail stores, a spa offering luxurious milk baths, grape baths, body wraps, Thai massages, uber-lux rooms, and most importantly a kids’ programme to keep the young ones occupied. So, while the kids are entertained at the hotel, the parents can go out to play at the casinos.

From pushing your limits physically and mentally, to working on your spiritual growth to seeking excitement, Macau has something for every type of traveller. All you have to do is pack is your bags!