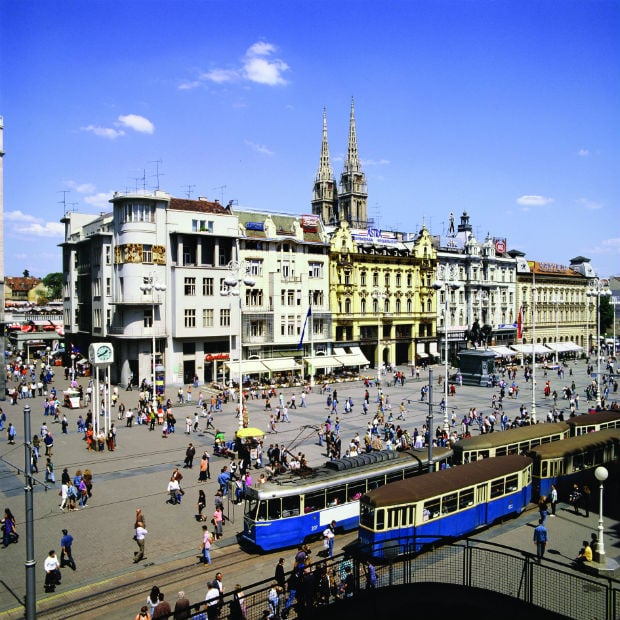 Defiant, quirky and oh-so-zany, Zagreb is probably one of europe’s best-kept secrets. With most tourists heading for the sunny coastline, the capital is often overlooked.

But walk the cobblestoned streets and you’ll find surprises lurking at every corner. A troubled history of annexation, mental remnants of the Soviet era, coupled with the disintegration of yugoslavia to form an independent Croatia, have lead to fractured psyche. But one that has found release in weird and wonderful ways. the result – nothing is too off-beat for Zagreb.

A good place to start is a visit to a museum that celebrates relationships, but only those that have ended. The Museum of Broken relationships is nothing like any museum you’ve seen before.

Instead of dusty rooms, full of precious artefacts, it is is filled with the most interesting pieces of rubbish, or ‘donations’ by those who were once in love.

An anonymous note, next to each object, with just a few lines, speaks volumes of the relationships. An unused pair of garters bears a note saying, ‘if only I had worn them, perhaps we would still be together’; an angry lover has donated an axe saying, ‘the more her room filled with chopped wood, acquiring the look of my soul, the better I felt.’ A terribly battered garden gnome, aptly named the ‘Divorce-day mad dwarf’ depicts yet another dramatic end.

An antique watch sits next to a cheeky note reading, ‘She loved things that were old and didn’t work. That’s precisely why we’re not together anymore.’ Next to a piece of broken electrical equipment is a scribble, ‘Much like this Wi-fi router, we couldn’t get it on.’

Several wedding dresses too have been donated, post-divorce. But one that stands out bears a humorously-hopeful note: ‘Can I get it back, if I were to re-marry?’

It takes hours to peruse through the many objects on display and the museum evokes a range of emotions. It is bewitching yet voyeuristic; hilariously funny and gut-wrenchingly sad; thought provoking and flippant, all at once.

The irony of girls in traditional attire selling Licitar, an edible blood red, heart-shaped cookie, which is also the symbol of Zagreb, on the cobbled streets outside is also not to be lost.

Another welcome stop as you make your way across the city is the Mandusevac Fountain, in Zagreb’s buzzing central square, the ‘Ben Jelacic Square’. It was this fountain that gave the city its name.

Legend has it that on a hot summer’s day, a Croatian soldier was returning from battle. Thirsty and tired, he stopped at the spring and asked a beautiful girl, Manda, to scoop up (Croatian: Zagrabiti) some water for him and his horse. The spring was named after the girl, while the town got its name after the scoop of water.

As riddle tongued locals will explain to you, it was also once a meeting place for witches, with the spell bound waters charming anyone who takes a sip to never forget Zagreb. Superstitious types may want to stick to a photo.

A short walk to the northwest is St. Mark’s Square. The heart of the Upper Town, this charming square holds several historic buildings, foremost among which is the St. Mark’s Church.

Built in neo- gothic style, the roof of the church is adorned with colourful tiles, bearing the coat of the arms of the former Triune Kingdom, and the oldest preserved coat of arms of Zagreb, dating back to 1499.

The square is the site of the swearing-in ceremony of Croatian presidents. Legend has it that it was also where the leader of the Croatian peasant revolt, Matija Gubec, was tortured and forced to wear a burning crown.

While another lesser-known legend connects the square to the 13th century Queen of Bohemia, Barbara of Cilli, who is said to have buried treasure in a secret tunnel in the ground below.

From here one of the best ways to get to Lower Town is via the world’s shortest funicular. Upon exiting the tramcar you will wonder if the journey, which feels like nano seconds, has actually taken you back in time. Everywhere are historic buildings, plaques dating back centuries and statues of Croatian greats framed within a modern metropolis.

Opposites blend perfectly, starting with Milan Lenuci’s efforts. An urban planner, well ahead of his time, Lenuci built the green horse-shoe or parks that sit smack in the middle of the city.

Other seeming oddities include: The Esplanade Hotel, built to provide accommodation to the passengers of the Orient Express, also a former Gestapo base, and is once again a luxury hotel; a meteorological post that dates back to 1884, which locals quip provides more accurate weather report than the news.

As the sun goes down, another popular tourist-spot on the outskirts of the city is the Mirogoj Cemetery. Locals refer to it as an ‘open air gallery’, where amid the monumental arcades adorned with lush creepers, artistic pavilions and intimidating domes only the headstones reveals its true purpose.

The spirit (no pun intended) of Zagreb is reflected in this cemetery, which is open to all, irrespective of religion. Many greats found final refuge here – from the first president of Independent Croatia, Franjo Tudman, to the basketball legend, Drazen Petrovic.

And many-a-tale comes with the territory. The most popular is that of a literary ghost, a lady in white, who simply wants to discuss prose with anyone willing to lend an ear. But like most of the legends that dot Zagreb, one can never quite tell the myth from reality.