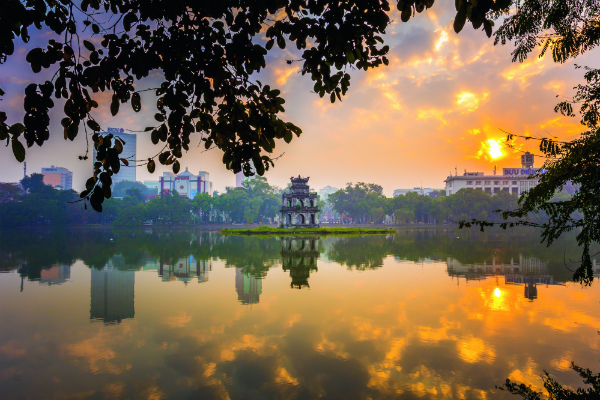 Despite often being described as a calmer alternative to buzzing Ho Chi Minh City to the South, Hanoi can certainly take your breath away.

Whether it’s the hustle and bustle of the numerous street vendors or the seemingly endless buzz of scooters along every alley, street and junction, there is plenty to keep every sense engaged as you explore one of Asia’s must see capitals.

The best place to start any visit is the Old Quarter, home to the business hub and many key attractions as well as a huge number of smaller boutique style hotels offering relatively cheap lodgings.

Here French colonial architecture combines with a more modern Asian twist across narrow commercial streets often named after their traditional businesses from cotton to jewellery, herbs and silk. Though the wares may have diversified, the area remains one of the best places for shopping in the city, with hundreds of street vendors and stores offering both traditional and modern goods in a maze of alleys and roads. Once you’ve spotted the item of your desires, haggling is a must and an expectation as part of the local shopping culture. Discounts of 50 per cent or more from the original price are not uncommon.

The Old Quarter is also famous for its sightseeing. On the south western side you will find the striking St Joseph Cathedral, the city’s oldest church. The Neo-Gothic structure dates back to 1886 and serves as a potent symbol of Vietnam’s colonisation by the French during the 19th century. Today it is an important base for the city’s thriving Catholic population and holds mass regularly.

A short walk away is Hoàn Kiem Lake, which offers some reprieve from the busy streets. The ‘Lake of the Returned Sword’, as it translates, is both a scenic spot with a compelling local legend. According to the story, in 1428 Emperor Lê Loi was boating on the lake when a Golden Turtle God surfaced and asked for his magic sword, which he had been given by another God to support a revolt against Ming China. He later returned the weapon and the Turtle Tower on an inaccessible island in the lake stands as a monument to the myth.

On another island to the north lies the Temple of the Jade Mountain, accessible by a striking red bridge. For a small fee of just over $1 (as is standard for most attractions) you can cross over and enjoy some great views of the lake and take in the architecture and history of the temple, which was erected in the 18th century and honours 13th century military leader Tran Hung Dao, scholar Van Xuong and Confucian master Nguyen Van Sieu.

Also located nearby is one of Hanoi’s top attractions, the Thang Long Water Puppet Theatre. Water puppetry is a Northern Vietnamese tradition dating back as far as the 11th century and here it lives on in shows performed using a small pool with a backing orchestra. Tickets are relatively cheap at less than $5 and it is worth buying early to get seats near the front.

Before or after a show, a good pit stop is one of the several nearby rooftop bars, cafes and restaurants, which offer picture perfect views over the nearby lake. One charming example is Café Pho Co, which is hidden in the back of a shop. After a slightly precarious journey across a courtyard and up several flights of stairs you can enjoy a traditional Vietnamese egg coffee with a view – don’t worry, it tastes a lot better than it sounds.

The lively atmosphere of the Old Quarter continues into the evening, as restaurants and food stalls to fit every taste and price point open their doors. For cheap Vietnamese cuisine and beverages, including the famous spring rolls, a must try experience is Pub Street, where tightly packed venues compete for tourist traffic along a narrow alley lined with plastic children’s chairs to seat customers.

Those in search of more authentic cuisine can take a street food tour to sample some of the best the city has to offer for around $20-25 per person, or settle for a more traditional restaurant. For the latter, Duoung’s Restaurant and Cooking Class offer some of the best Vietnamese eating in the city.

After a busy day and night in the Old Quarter it is worth venturing out to sample more of what the thriving capital has to offer.

One of your first stops in the morning should be the Ho Chi Minh Mausoleum, the final resting place of the Vietnamese Communist revolutionary leader. After sometimes lengthy queuing you can catch a brief glimpse of the former president and prime minister’s embalmed body, which lies in a glass case with a constant military honour guard. Nearby you can see the distinct yellow Presidential Palace – where Ho Chi Minh is said to have refused to live due to its grandeur –and several other structures he inhabited during his governance of the country including a traditional Vietnamese stilt house. 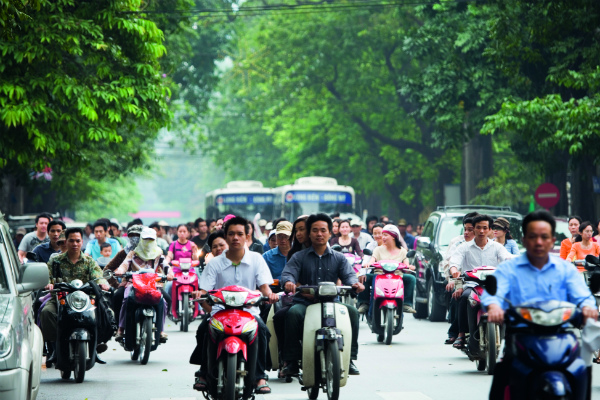 The nearby Ho Chi Minh Museum offers further insights into the Vietnamese leader’s life and achievements or you can explore the One Pillar Pagoda, one of Vietnam’s two most iconic temples, which dates back to the reign of Emperor Lý Thái Tông in 1049.

From the mausoleum complex, a 15-minute walk to the north will take you to the shores of Hanoi’s West Lake and the Tran Quoc Pagoda, the city’s oldest Buddhist temple. Aside from its striking pagoda tower, the sixth century site is home to numerous shrines, relics and statues. Other spiritual stops include the nearby Quán Thánh Temple, which dates back to the 11th century and features a large bronze statue of one of the principle deities of Taoism, Xuan Wu.

Some distance away to the south are the numerous courtyards of the Temple of Literature, which was constructed in 1070 and later hosted Vietnam’s first university from 1076 to 1779 before serving as a hospital during the French occupation.

Other key historical sites include the Imperial Citadel of Thang Long, located just a short walk from the mausoleum. The UNESCO World Heritage Site dates back to the Lý dynasty and was subsequently expanded with palaces and other structures including several buildings constructed by the French. Also on the site is the iconic Flag Tower of Hanoi, which was built in 1812 and is frequently used as a symbol of the city, and the Vietnam Military History Museum, which plays host to vehicles, jets and equipment used during the American/Vietnam War.

Another reminder of the city’s history can be found at Hoa Lò Prison just to the southwest of the Old Quarter. The name Hoa Lò, which translates into fiery furnace, originally referred to the number of stores selling stoves during the pre-colonial period but it also appropriately describes the hellish conditions political prisoners were held in by the French, who constructed the jailhouse. Another section details the site’s use to house American prisoners during the Vietnam War like US Senator John McCain, who was shot down while on a bombing mission over the city.

A popular escape from the chaos of Hanoi’s streets is a cruise along Ha Long Bay to the east. The UNESCO World Heritage Site is around three to four hours’ drive from the capital, but when you get there it will seem worth every minute as you take in the serene combination of emerald waters and lush limestone islands dotting the horizon.

Cruises typically last from a few hours to up to three days If you opt to stay on-board, rooms are typically small but comfortable and most boats have a sizeable indoor dining area with a view to escape the heat. Pricier boats even offer private terraces, cooking classes, Jacuzzis and all-inclusive a la carte menus with some of the best food you’re likely to come across in this part of Vietnam.

Lengthier excursions typically include day trips to prevent cabin fever, with kayaking, caving and hiking all part of the itinerary, or you can and just sit back and relax on the top deck while soaking in the alluring views until the sun goes down.

A fitting way to enjoy the best of a truly engrossing country.