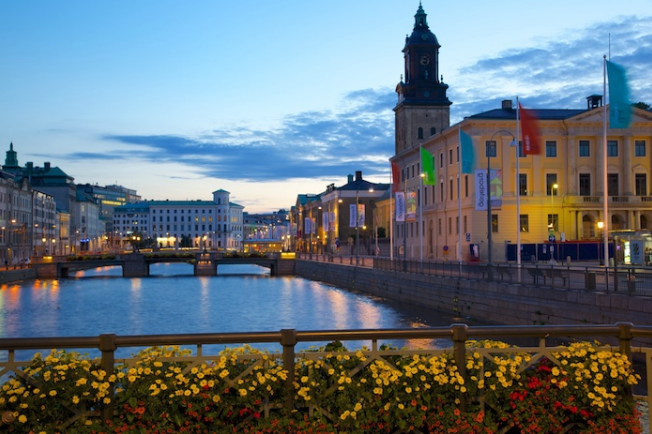 For a city that was once the centre of Swedish shipbuilding and later became the headquarters of vehicle manufacturer Volvo, you could be forgiven for dismissing Gothenburg as little more than an industrial centre.

But nowadays art, entertainment, culture and food are as much a part of the city’s fabric as its strong industrial past.

Among the best places to start any visit is Korsvägen, a transport and events hub in the heart of the city. Nearby you can find many of Gothenberg’s key attractions including several museums and the Liseberg fairground.

The first stop for those interested in the arts should be the Museum of World Culture. This cement and glass building explores issues as diverse as gender, humanity and conflict through its exhibitions and events. Expect a variety of thought-provoking displays on contemporary global issues.

Alternatively, for a more factual experience, the nearby Universeum, or science centre, is recommended.

Highlights include some of the biggest aquariums in the world with several hundred species of fish. The Rainforest zone is also a treat for the senses and you can even catch a glimpse of caimans, toucans, sloths, apes and poison dart frogs if you are lucky.

Naturally, hours of touring museums and exhibitions can be exhausting for the mind. So what better way to perk up than with a ride on a rollercoaster?

The nearby Liseberg fairground is Sweden’s most popular attraction and includes rides and shows that will suit every taste. The Lisebergbanan roller coaster is one of the highest in Europe, Mechanica will throw you around in the air quite literally and Helix is the longest and fastest ride in Scandinavia, reaching speeds of up to 100kmph.

The Liseberg Wheel also offers spectacular views across the cityscape at a slower pace.

Another stop on any Gothenburg trip should be the city’s cultural hub Götaplatsen. The square, located just minutes away from Korsvägen, was inaugurated for an industrial exhibition celebrating the city’s 300th anniversary in 1923. It is enclosed by the Gothenburg Concert Hall, the Museum of Art, City Theatre and City Library and centred by an iconic statue of the Greek sea god Poseidon. The figure has become one of the symbols of the city and is worth stopping for alone, even if you have no interest in the nearby attractions.

From here, those looking to do some more sightseeing can take a walk along the main boulevard and cross the canal to Gothenburg Cathedral. The classical style structure, consecrated in 1815, is the third cathedral to stand on the site after previous versions were damaged in fires. Today it plays host to classical concerts and recitals while its gardens offer welcome respite from the nearby shops.

Those looking to escape the hustle and bustle of the city streets should also visit the Trädgårdsföreningen. The 19th century park is free to enter and offers picturesque views of the nearby canals.

A closer look at the various gardens and statues is worthwhile, if you have the time. When you are finished exploring the city centre, your next stop should be the coastline. Hönö island is a short drive and ferry ride away from the city and a popular spot for holiday homes. Here many of the attractions focus on the sea including the marina and fish market.

There are also boat excursions to explore the coastline, if you can brave the cold temperatures.

Before you leave, make sure you visit the Tullhuset restaurant on the island’s southwest tip to sample the catch of the day. Sweden is famed for its seafood, which locals say is blessed with a richer, fuller taste thanks to the cooler water temperatures.

Sitting down to a shrimp, lobster, salmon, halibut or arctic char dish is a great way to end any coastal excursion.