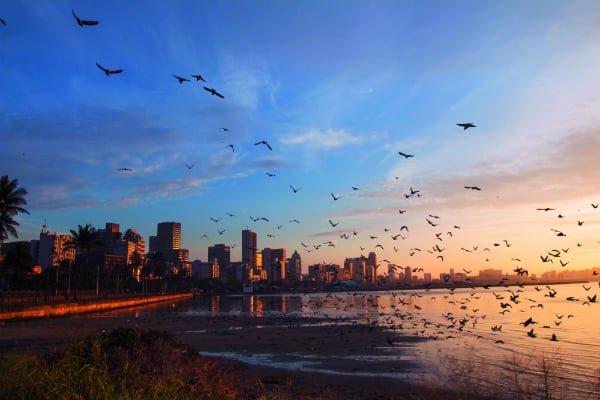 Durban’s tourism board bills the city as ‘the warmest place to be’; although in winter – coinciding with Dubai’s summer – it is reassuringly cool.

Occasional showers can puncture the sunshine, and a jumper – or possibly even a light raincoat – is worth packing.

But the cool weather doesn’t stop the schools of surfers who run out along a pier to take a shortcut to the breaks beyond the beach. Even more adventurous swimmers can take a dip with sharks at the nearby Aliwal Shoal.

Throughout South Africa, one man’s face and story are everywhere: the country’s first post-Apartheid – and first black – president, Nelson Mandela. It was on the road outside Durban that Mandela was captured in August 1962 after years of fighting for racial equality. Now a statue and museum stand at the site.

And it was in one of the city’s townships that he finally cast his first democratic vote on April 27, 1994, four years after being released from jail. Mandeba’s (as he is affectionately referred to) book about his struggle, Long Walk to Freedom, is an essential read for a politically savvy visitor to South Africa, and it was at Ohlange High School in Inanda that he took the final steps of that journey.

He had postponed his release date from jail to coincide with the dual anniversary of the birth and death of his good friend, fellow freedom fighter and founder of the African National Congress, John Langalibalele Dube. Dube had founded the school, and is buried there.

After casting his ballot, Mandela walked to Dube’s grave to report, “Mr President, I have come to report to you that South Africa is free today.”

Our guide when we visited the grave was a young man when he showed Mandela to the voting booth, and it is surprisingly moving to shake the hand that shook the hand of the father of modern South Africa. Around us, children ran and played between classes. The school is still teaching underprivileged kids today.

South Africa has a strong reputation for solid food, and Durban is no exception to the rule. Great steaks are everywhere, paired with good local drinks at reassuringly affordable prices thanks to a depressed rand. And kinglip is a tasty fish caught nearby. A local delicacy is ‘bunny chow’. Its name belies the fact that no rabbits were hurt in its making. Rather, it is a meaty lamb – or chicken – curry served inside a hollowed out loaf of bread.

Curry may not sound like the most South African of cuisines, but Durban is surprisingly multicultural, and its residents are proud of the fact it is home to more people of Indian origin than anywhere else outside India itself.

The reason for this is something to be slightly less proud of. After the Dutch began growing sugar cane, they found the native Zulus hard to manage. With a culture of shared ownership and duty the Africans would help harvest out of a sense of generosity, but would see their ‘pay’ (which was largely in the form of foodstuffs) as gifts rather than a sign of contractual obligation. So they would come and go from the fields as they pleased. 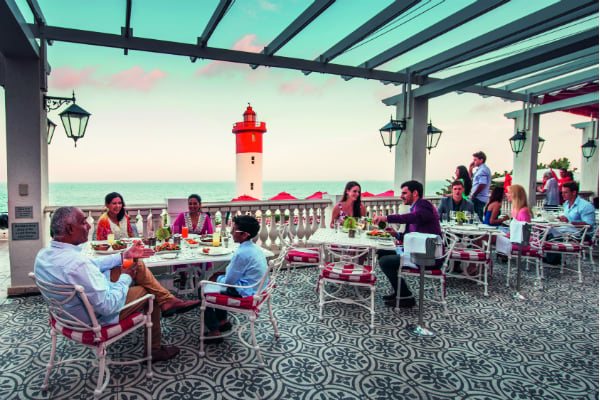 The stuffy and officious Europeans brought in Indian labour instead, seeing workers from subcontinent colonies as much more the nine-to-five sort. Many were also slaves.

This sort of thing has left many white South Africans with a hangover of colonial guilt. But its side effects include not only bunny chow but also an inclusive culture that serves Muslim travellers well. While halal food is not ubiquitous, neither is it hard to find. And there are ample mosques within striking distance of the art-deco sea front.

Durbanites appear to love pushing their visitors off things. On our visit we took a trip to Karkloof Canopy Tour, where we were taken a short way into some lush jungle, harnessed up and persuaded to step off a perfectly stable platform. Twelve zip wires took us screaming through the canopy past birds, trees and beautiful wild flowers.

Alternatively, head to the Moses Mahida Stadium close to the centre of the city. There you can climb up the supporting arch, erected when the structure was built for the 2010 FIFA World Cup. It offers sweeping views of the city and the surrounding countryside, and if you also want to see your life flashing before your eyes you can jump off. The world’s tallest swing sweeps the adventurous tourist through a 220m arc over the football pitch.

Durban’s surrounding province KwaZulu-Natal (in 1994 the territory of KwaZulu, or ‘place of the Zulu’ and Natal province, named for its discovery by the Portuguese explorer Vasco da Gama on Christmas day 1497, were united) offers numerous microclimates encompassing everything from balmy vineyards to arid scrub to snow-capped mountains.

You can go from sunning yourself on the beach to throwing snowballs in the Drakensberg within hours, although the white stuff doesn’t offer great skiing.

All in all, as a third South African venue after the headline attractions of Johannesburg and Cape Town, Durban is a direct flight from Dubai and offers something for everyone.