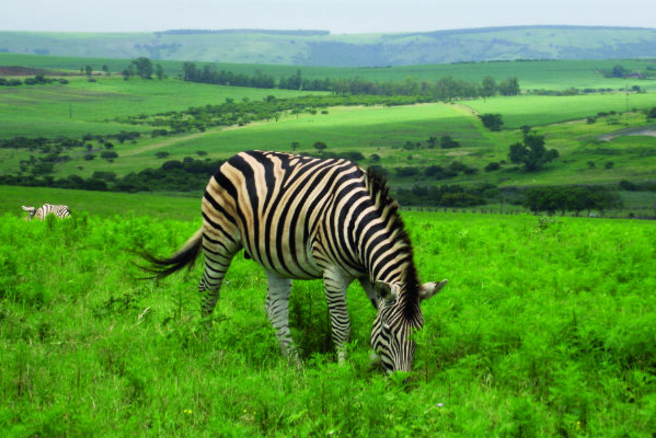 Imagine yourself on a pure white sandy beach with lush green vegetation and atmospheric mountains as a backdrop.

No, it is not the Caribbean or the Seychelles. In fact, the beach in question is in Durban some 30 minutes outside the city centre and close to the holiday town of Ballito. To be more specific, it is part of the Fairmont Zimbali Resort where the unspoilt shoreline stretches for miles and the tranquillity – inside the hotel at least – provides a cocoon of calm much in contrast with the mainstream perception of edgy South Africa.

That is not too say the resort – just 16 kilometres from King Shaka International Airport – is all motherhood and apple pie.

Townships juxtapose with luxury villas in the surrounding hills. Meanwhile, a sturdy barbed wire fence rings the hotel complex (and just about every other residence or company premises you see in Durban). I am even warned by the security guard that it is not a good idea for me to venture past the said fence, when I want to run along the beach in the evening, with the words: “It’s not safe to do so after 6pm.” Anecdotally, some of the group I am traveling with are also advised not to get taxis at night because of the risk of carjacking and kidnapping.

All this is a crying shame. For Durban is a stunningly beautiful place. And for the adventurous traveller or those wanting to stay safe in a resort at night with only daytime trips to the plentiful local attractions, it is still a great option. The weak rand also means luxury is available even to those on a tight budget. For our group, on the first evening of our four-day trip, we order four branded drinks at the Fairmont terrace bar. The bill comes to just 15 dollars and that is in a high-end hotel. Very reasonable indeed.

Day two and we journey to the Phezulu Safari Park in the Valley of 1,000 hills, in Kwa-Zulu Natal province – less than an hour’s drive from Zimbali. Here you can visit the crocodile and snake park. The braver souls can actually sit and eat a meal at a picnic table within one of the croc pens. It could only happen here. As the famous saying goes ‘TIA’ – this is Africa.

Within the same site, you can also “feel the rhythm of Africa” – according to the marketing slogan – and take in a traditional Zulu show. During the bombastic display, beehive-shaped thatched huts play host to the Gasa clan as they explain the beliefs and rituals associated with their unique culture. Aside from the impressive music, dancing and traditional clothing the drumbeats are punctuated by some great moments of humour. Not least when audience members are invited to join the party with their own attempts at Zulu dancing.

Following the 30-minute show, we tour the roads of the Midlands Meander route – known locally as ‘the heart of South Africa’ – stopping off for cheese, chocolate and biltong (beef jerky) tasting at the family-run Swissland Cheesery along the way. We end the day at the Nelson Mandela capture site in Howick. It is the place where he was apprehended before being locked away for so many years on Robben Island. The poignant museum exhibition at the site and steel sculpture of the great man – by artist Marco Cianfanelli – really bring home the struggles of a country still suffering from the aftermath of apartheid today.

We spend another pleasant night in the KZN province, this time at the remote Lythwood Lodge. Nestled in the scenic foothills of the uKhahlamba Drakensberg Mountain range – the highest in South Africa – this four-star country hotel is as relaxing as any yoga retreat. We stay for just one night but nobody wants to leave this peaceful haven in the morning.

However, on day three it is time to take a 60-minute drive to the Tala Private Game Reserve in Pietermaritzburg, also in Kwa- Zulu Natal. Following a delicious spare ribs lunch in the restaurant looking out onto the reserve, we climb into the opentop jeep and set off for a two-hour ‘game drive’. Along the way we encounter giraffes, impalas, zebras, wildebeest, hippos and rhinos – not to mention some spectacular mountain views. The only disappointment is the lack of big cats, the huge expanse of land apparently still not being large enough for lions to roam.

Another fantastic stop is Howick Falls on the Umgeni River. The 95-metre high waterfall is quite a sight to behold. We take a 30-minute hike to the bottom of the falls and paddle in the water. A swim is not advisable here though as locals can be seen washing their clothes in the rapids at the top, meaning the water is not particularly clean. Still, it is a fun descent with some great landscapes to take in. Legend has it that a giant serpent called Inkanyamba inhabits the pool at the bottom of the falls. The creature must be asleep when we arrive though, as there is no sight of it.

Having spent our final night at the Fairmont, day four is when we get to participate in the Durban city tour – something I have been particularly looking forward to. First, we jump on Segways and navigate our way through the hordes along the ‘Golden Mile’ promenade – heading down past the Bay of Plenty and North Beach. Although the Segway speed is restricted, this is a fun way to experience the seafront.

One quite shocking thing is that despite apartheid ending decades ago, the beaches still seem segregated and whites stay at one end while black people stay at the other. There seems to be very little integration. Quite saddening really.

Not wanting to end the trip on a sour note, we travel to the top of the Moses Mabhida Football Stadium on the Sky Car for some dizzying views of the city below. Then we head to the Casablanca seafood restaurant on the other side of town. As well as the overly generous portions – popular throughout South Africa and almost on a par with America in terms of being highly calorific – the establishment offers delightfully fresh Indo-Portuguese dishes. Among them are curries and mixed grills with calamari, prawns and lobster as well as gourmet milkshakes and decadent deserts ranging from granadilla cheesecake to cape malva pudding. The joyful waiting staff take great delight in ensuring we leave the restaurant a good deal heavier than when we entered. After all, carrying extra weight in South Africa is actually a societal status symbol. Or at least that is our excuse.

A short while later, when we are taxying on the runway ready to depart from King Shaka International Airport, I have mixed feelings about this intoxicating place. For while it is good to know that such a hidden gem exists, there are also pangs of sadness about the problems still blighting South Africa and preventing Durban from becoming what it deserves to be – the holiday paradise of the continent. As things stand, this is not a destination for the faint-hearted. But visiting is certainly an enriching experience. So be bold.