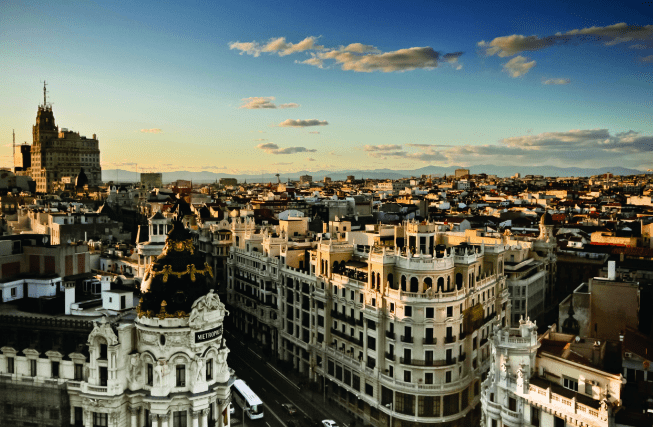 Before my fleeting visit to Madrid, I was told by frequent travellers to Spain that the city does not hold a torch to its peer Barcelona. Since this was my first visit to the country, I decided to keep an open mind.

The best time to visit Madrid (and Spain) is autumn when the weather is gradually transitioning to cooler temperatures, making your sojourn much more pleasurable. As I found out, Madrid is a city best enjoyed while walking through its cobbled streets, surrounded by stately buildings – some dating back to the 17th century.

My choice of accommodation proved the ideal starting point for a self-conducted walking tour. Situated between Gran Via and Alcala – one of Madrid’s popular areas – I was just a few minutes away from the city’s famous museums Prado, Reina Sofia, Thyssen and Caixa Forum. These museums, most of them consisting of treasures collected by Spanish royals over the years, are definitely worth a visit when you are in the city. Be prepared to be waylaid a number of times. For, photo opportunities in front of the various architectural delights lining the street are simply irresistible.

A few blocks away is Calle de Alcala, the street housing Madrid’s famous Alcala Gate – a monumental entryway that was erected in the 18th century. The gate is worth a visit for its intricate carvings alone.

Following my walking tour from Calle de Alcala, I head down the famous GranVia where a number of theatres and shopping outlets line the street. The architectural style dates back to the 20th century, making an interesting juxtaposition of history and modern life.

My next stop in the city was the Puerta del Sol or the Gate of Sun, one of the entry points in the wall that surrounded 15th century Madrid. Today it is one of the busiest areas of the city and leads to another well-known square Plaza Mayor. Built during Spanish monarch Philip III’s reign, the rectangular plaza has 136 houses and 437 balconies that face towards a massive square. The site was used for important events and parades during the monarch’s time, in turn affording the residents of the square a prime view. Towards the centre of the square is a statue of Philip III and in the surrounding buildings various coffee shops and souvenir shops, all of them worth a visit.

Madrid and its squares are meticulously interlinked with extremely tidy streets. Even as we exited Plaza Mayor, my guide pointed out various churches and places of historical importance. Although many areas within the city can be found using a simple map or a guided tour app, I would suggest getting a guide for certain areas such as Puerta Del Sol to explain the local heritage.

Next, we head down to the Royal Palace. Although the royal family has taken up residence in a smaller villa in the outskirts of the city, the palace is still used to entertain state guests and to host diplomatic dinners. It does not disappoint in its splendour. Certain rooms within the palace are open to guests, who can imagine the life of a monarch for a few fleeting moments.

Surrounding the palace is the Orient Square, a garden lined with various statues of monarchs. Walking through the garden to one of the restaurants for a quick bite and coffee is recommended. Sitting facing the Royal Palace at the Orient Square and next to the opera house is one of the most coveted views in the square. Even well into the evening, my café was still abuzz with activity as patrons strolled in for their fix.

As night fell, I took a tour of Paseo de la Castellana – a street that housed aristocrats in years past. Wide roads, lined by trees and flanked on either side by impressive houses greet you as you cruise down the road. Previously home to the rich, the paseo now hosts the embassies of various countries and the offices of multinational firms. On my way back, I passed by Columbus Square, where a massive statue of explorer Christopher Columbus stands tall as a tribute.

By this time I was tired and a little chilly – Madrid’s temperature dips as night advances. After heading back to my hotel, I was delighted to find that the neighbourhood was still pulsing with activity. Encouraged by the hotel staff, I clambered up to an open-air rooftop bar with a breathtaking view of the city. Looking down at the glittering panorama of Madrid at night, I concluded that I had thoroughly enjoyed my trip and will not be making deregatory comparisons with Barcelona – for now at least.