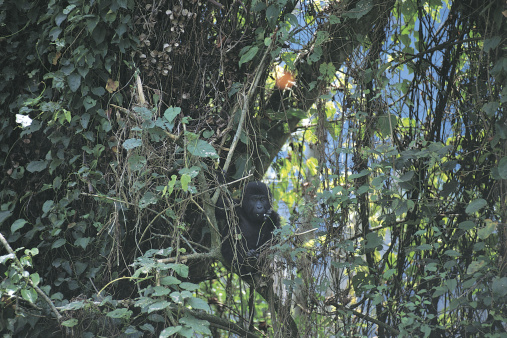 There are many myths surrounding the Mountain Gorilla from traditional african to nineteeth-century european beliefs. Speke (1861) heard that,‘more formidable were monsters who could not converse with men and never showed themselves unless they saw a woman pass by; then, in voluptuous excitement, they squeezed them to death.’

Others believed that gorillas could light fires, build huts, defeat elephants in single combat, catch and throw spears back at attackers.

As a result they were hunted almost to extinction by white game hunters and appeared as savage monsters in Western literature of the Tarzan genre and films such as King Kong (1933). It wasn’t until the 1970s that they were accurately and scientifically described as harmless vegetarians by George Schaller and the controversial Dian Fossey.

There are now believed to be 782 individuals surviving in two populations in rwanda, Uganda and the Dr Congo. The first is found on the Virunga mountains of the three countries and the second in Bwindi Impenetrable national Park, Uganda.

The two populations differ slightly in type, behaviour and diet, reflecting different environments and altitudes. The Virunga gorillas are heavier and darker, but have never been recorded eating insects or any meat. In contrast Bwindi gorillas can be found around rotting logs helping themselves to teeming insects, buffet style.

They generally form groups of 10-20 individuals led by a silverback (their hair goes grey after 12 years) and include a few younger blackbacks, females, juveniles and infants. Sometimes unattached males form transient groups of up to thirty individuals. Troops are not territorial; they travel several kilometres a day in search of lush vegetation, sleeping in a different location every night.

The general procedure to catch a glimpse of the gorillas is to arrive at the trailhead at 7am, walk to the troop – between one to three hours – spend one hour with them and return. As the rain forest terrain is hilly, and often steep, a reasonable degree of fitness and sensible clothing particularly shoes is required.

There are strict rules concerning visits, the most important is that you are not suffering from any respiratory illness as gorillas can die if they catch pneumonia.

For this reason the seven metre distance rule is strictly enforced. Groups are set at a maximum six persons and all visitors must be over 15-years-old.

Due to the popularity of gorilla bookings it is strongly advised to book in advance; taking advantage of cancellations is possible but risky. There are eight habituated groups in Bwindi NP, accessed through four entrances. Booking is usually done through a travel agency but can also be booked independently through the Uganda Wildlife Authority in Kampala. It currently costs $500 per visit for most visitors; day-to-day fees are listed at uwa.org. The dry seasons of December-February and June-July are optimal times to visit.