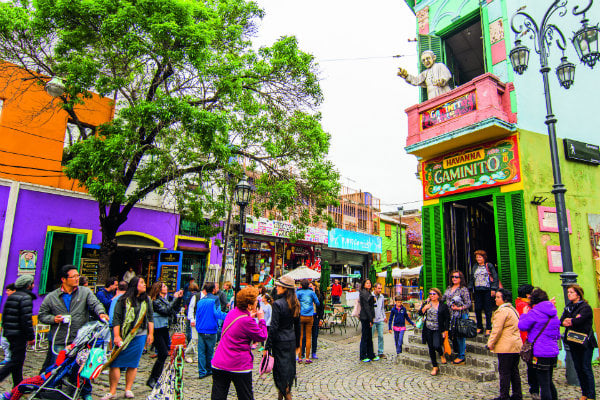 Strolling around the sprawling city of Buenos Aires, you can feel the passion rising from the history-soaked streets, where experiences are as varied as the cultures and traditions that have built them.

Rising out of age-old indigenous communities, colonialists and settlers from Spain, Italy, France and elsewhere have made the bustling Argentine city their home since the 16th century, creating a melting pot that fires the senses.

Here you can find the prince and the pauper – the luxury and the austere – each and all with a story to tell across Buenos Aires’ 47 neighbourhoods.

So big is the city, and so varied the experiences that we found it a challenge to fit everything in that we wanted to see and do, but there are some certain highlights that must not be forsaken.

Premier among these must surely be the cultural lifeblood of the city: tango. Whether you’re keen to go nose-to-nose with a partner, or prefer to watch others practice the art, there are many opportunities to interact with the dance that originated in the late 19th century along the River Plate.

So important is tango to the Buenos Aires way of life that you can find it in its many and varied forms both on the street, in dance studios and at cafes throughout the city. Head to the Almagro district for the full range of experiences – specifically Carlos Gardel Street, named after arguably the most famous singers of tango. Tourist traps and underground clubs rub shoulders here, so ask
around and decide what suits you, should you wish to take in a show.

If you want to try the dance, yourself then La Catedral Club is fun for beginners. Its quirky décor and welcoming attitude means you can feel comfortable on the dance floor no matter your ability.

Another Buenos Aires must is enjoying the café culture. If you don’t join the Porteños (as the locals are called) for an extended coffee break at least once a day, then you can barely say you’ve been to the capital city at all. The cafes are where people from all walks of life meet to talk, laugh, lament and put the world to rights over a cortado, and in Buenos Aires they’ve made an art of it.

Perhaps the most famous place to go is Café Tortoni, which takes you back to the 1800s with its design, entertainment and service. The fact that so many tourists frequent its tables reduces the authenticity of the experience, but it’s an enjoyable stop nonetheless.

You won’t be hard pushed to find a genuine café experience around the city, though. From the grand to the ghastly, in theatre halls and marketplaces, and everything in between, you’ll find something to match your taste.

Staying on the South American gastronomic bent, when it comes to food there is no escaping what many would consider the country’s national dish: steak. Well-cooked steak is a matter of pride for eateries across the land, and Buenos Aires’ countless restaurants are in constant competition to deliver the best in town. 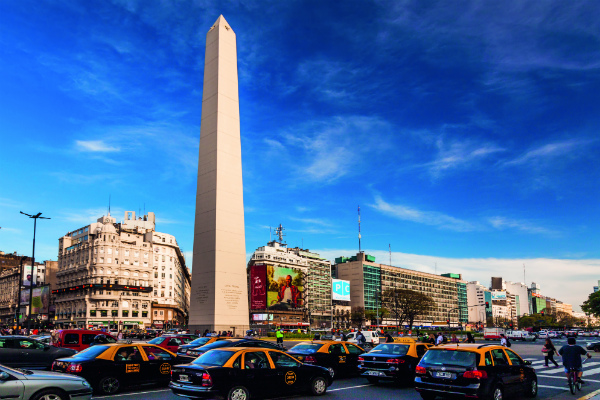 While there is a lot of asado (grilled meat) on offer, non-meat eaters should not despair. Buenos Aires has an incredible range of vegetarian and vegan eateries, from high-end dining to city-centre buffets, most of which offer creative menus. Kensho, Pan y Teatro and Artemisia are up there with the best of them.

Dessert is also a serious business in Buenos Aires; so don’t forget to dedicate some time to sampling the dulce de leche, alfajor and rogel.

If you feel the need to burn off some of your culinary treats, or just want to get to know the city from those that know it best, Buenos Aires has a number of excellent walking tours for all budgets.

From free group tours to tailored private tours, you can just about pick any district or topic that takes your fancy and you’ll usually find what you’re looking for. Buenos Aires Free Walks is a good place to start.

Our trips around the city centre and Recoleta, and La Boca were fascinating, with our energetic guides bringing the history and culture of the places to life. One tour about the mixed architectural identity of the city has us surprisingly hooked.

The hop-on, hop-off Buenos Aires Bus also provides an excellent city tour, and is able to take you around more of the city in a shorter space of time. It’s a great way to get to and from the places you want to see the most.

Among your hit-list should be the aforementioned La Boca, with its colourful houses, historic port and earthy charm; the fascinating and labyrinthine La Recoleta Cemetery, art district San Telmo, Plaza de Mayo, and the bars and boutiques of Palermo.

Whether you’re a football fan or not, going to one of the local team’s home games is also a wonderful experience. It’s certainly one you will never forget. Packages are in plentiful supply from tour operators, and while you can pick from the city’s various teams, you can’t go far wrong with Boca Juniors – former home of stars such as Diego Maradona, Carlos Tevez, Claudio Caniggia and Martin Palermo, and the most popular club in a country where football is king.

Full-blooded is the only way to describe the fans, and they’ll ensure you get into the swing of things well before the first and after the final whistle.

As you might expect, the range of hotels goes from the luxury to the lousy. We enjoyed a mix of accommodation, and particularly like the charming Rendez-Vous Hotel in Palermo Hollywood.

Buenos Aires is a city that seems to get under your skin. The mix of cultures, districts and experiences mean that you’re never short of an adventure or two, and it might mean having to visit more than once to get your fill of this pulsating destination.