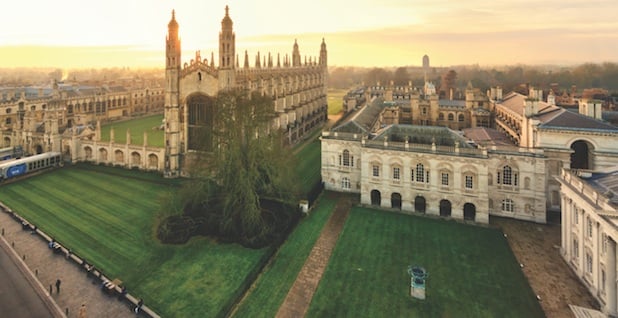 Some 800 years ago, it is said, a group of persecuted scholars fled for their lives from the English city of Oxford – later founding the now world-famous Cambridge University.

At least, that is the simplified version the tourist guides will tell you. Regardless of how it began, Cambridge’s long and rich history is visible with every step you take along its cobbled paths. Every building, every street and every person you meet brings a new chapter to a city that has put the joy of learning and knowledge at its heart for more than eight centuries.

Yet for a city that has a reputation that hangs on its titular institution’s prestige, it still comes as a surprise to many visitors that there is not a single ‘Cambridge University’ building. Like its academic rival Oxford, the institution is composed of a variety of colleges – 31 in total – some of which date back to the 13th century, while many others originated in the last 100 years. The redbrick Robinson College, for example, was built as late as 1979. However, unless you have a taste for post-modern architecture, the older, historical colleges are by far the best places to explore.

Chief among these are King’s College and its iconic chapel. Famed for its towering turrets and its angelic choir, the cathedral-sized building is unique for being one of two churches to survive from the medieval era with its original stained glass windows still intact. Pink Floyd fans may be amused to see the infamous ‘keep off the grass’ signs that inspired the song ‘Brain Damage’, although the college generally takes a dim view of anyone tempted to play the ‘lunatic’ when it comes to their prized lawns. 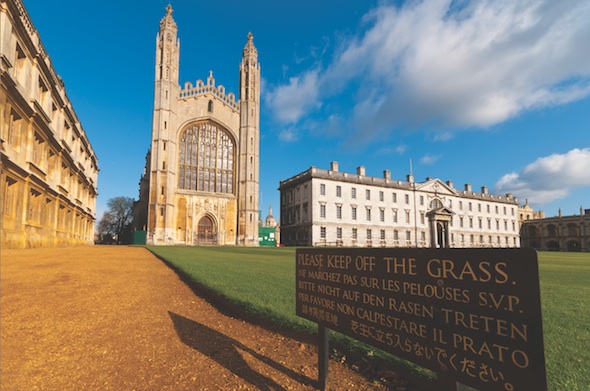 Following on from King’s College are numerous other institutions each boasting their own history, architecture and tourist trails. Popular options tend to be the neighbouring Trinity and St John’s Colleges; both have traditional quadrangle courtyards, picturesque riverside scenery and their own unique features in the form of Trinity’s vast Wren Library and St John’s ‘wedding cake’ clock tower.

These riverside colleges are easily explored on foot, but entry may be restricted during the months of May and June when the students are embarking on their exams. However, you can walk north-to-south along the River Cam by way of the ‘the backs’ – literally where all the colleges back onto the river – and see the colleges in all their picturesque, if distant, glory.

But if you want to get really close to these colleges and their histories, then there is no better way than by boat. Or, more accurately, by punt. Originating from the Venetian gondolas, the experience of punting up and down the River Cam in wooden boats is one that is still loved by students and visitors alike. Depending upon your confidence in pushing and steering the craft with a five-metre pole, you can opt to take a punt out yourself or, at an added cost, hop on a guided tour ride. Many of these are run by current or former students who will give you a variety of insights and anecdotes from the colleges’ histories and their own personal journeys of studying at Cambridge. Perfect your punting experience with your own picnic and simply sit back and enjoy tales and trivia from the ages as your boat gently glides under the river’s many willow trees. 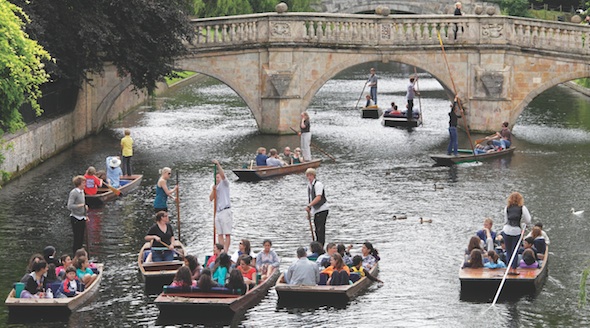 If you would like to opt for a true university experience, you can spend the night in a student room. Many colleges, including the central Christ’s College, do an affordable bed and breakfast service during the university holiday periods. Like its famous alumni including Newton, Darwin and John Cleese, visitors can eat in the Harry Potter-style halls, enjoy a beverage in the college bars and take an evening stroll in the beautifully kept gardens.

As an alternative, accommodation such as Finches Bed & Breakfast in the neighbouring village of Girton can give you both an opportunity to escape the noise of the city centre and the impetus to try a very Cambridge experience for yourself: hiring a bicycle. Few cities in the United Kingdom have as high a proportion of bikes as Cambridge. Vehicles range from Tour de France-style road cruisers to wicker basket and flower bedecked vintage wheels and can be easily hired from shops such as City Cycle Hire. Cambridge’s relatively flat landscape gives cycling newcomers an easy time as they explore the city. 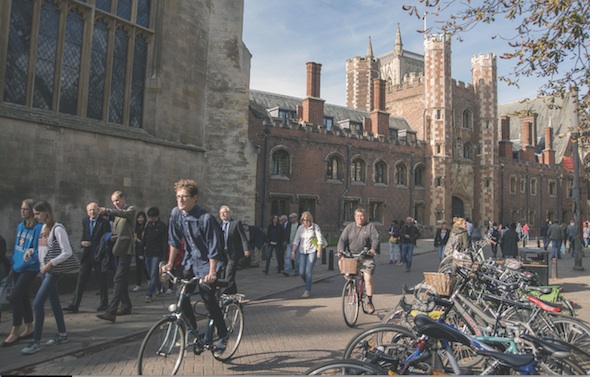 In the central hub, there are a plethora of attractions to keep your mind firmly occupied beyond scuttling through colleges. Old architecture lovers should not miss a chance to explore Great St Mary’s Church, right in the heart of Cambridge’s busy market area. You can either explore the 15th century church’s ground floor for free or pay an additional cost and get a view of the city from its bell tower. Further along is a truly rare relic of English religious architecture – the Church of the Holy Sepulchre, fondly known by locals as the Round Church, for its cylindrical shape. Built around 1130, this church is just one of four remaining medieval round churches still in use in England and gives an eye-opening insight into the city’s religious heritage.

Another gem on Cambridge’s cultural landscape is the impressive, Roman-style Fitzwilliam Museum, a treasure trove of art and antiquities from the university. Notable highlights include masterpieces by Titian, Rubens, Van Dyck, Hogarth, Constable, Monet, Degas, Renoir and Picasso. And even better, the museum is free, though you may find the pennies escaping you if you purchase a postcard or present to take home from the museum’s tempting gift shop.

As sightseeing is hungry work, a good stop-off from the Fitzwilliam Museum is the nearby café and bakery Fitzbillies, where you can try the sweet English delicacy known as the Chelsea Bun. Eaten alongside a large pot of freshly brewed English tea, the cinnamon-flavoured raisin rolls are the perfect pick-me-up to get you back on the tourist trail. 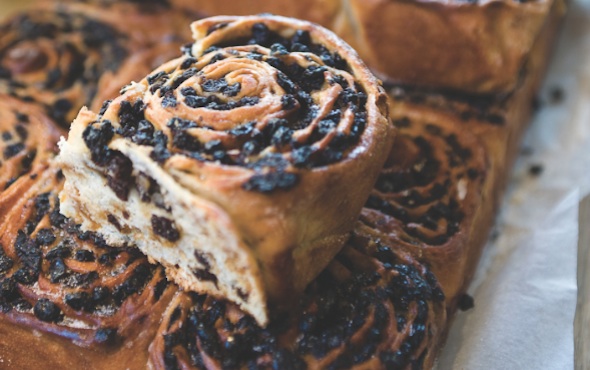 For a more hearty option, visit the Agora Copper Kettle for a Turkish twist on English lunch. And if that evening you are looking for some real haute cuisine dining, Midsummer House is the place for you. Just one of a handful of English restaurants to have two Michelin stars, the riverside fine dining restaurant may be among Cambridge’s priciest establishments but, with 10 different courses, the dining experience is one rarely forgotten.

Having perhaps overdone it on the dining front, there is no better time to venture out on the bikes and see some of Cambridge’s scenic outskirts. Only seven miles away is Anglesey Abbey, a historic stately home that boasts some spectacular gardens and wildlife-ridden nature trails. Closer to home is the Merchant Ivory-style village of Grantchester, where student and poet Rupert Brooke frolicked before his untimely death in the First World War trenches.

Like the grass of King’s College, this village also inspired a Pink Floyd classic, so make sure you have your playlist updated to bring a modern twist to your journey through time.