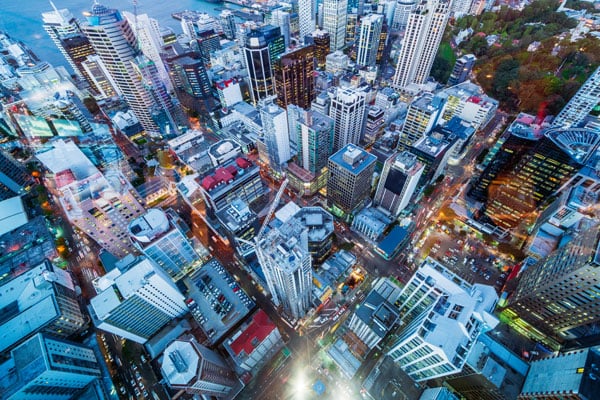 The construction cranes that pierce the Auckland skyline are a visual indication of the growth New Zealand’s largest city is experiencing. Close to one-third of New Zealand’s estimated 4.5 million population lives in Auckland, a geographically blessed — and traffic-cursed — city spread over at least 50 volcanic cones on a North Island neck of land between two large harbours.

The emerging Wynyard Quarter on the western waterfront is home to a new theatre, a park where movies are projected onto the side of a former cement silo in the Southern Hemisphere summer, and several restaurants.

Auckland’s personality, like New Zealand’s, is laid-back and outdoorsy, but its sophistication shines in its expanding art scene, thriving fashion industry and a new generation of chefs embracing native ingredients. 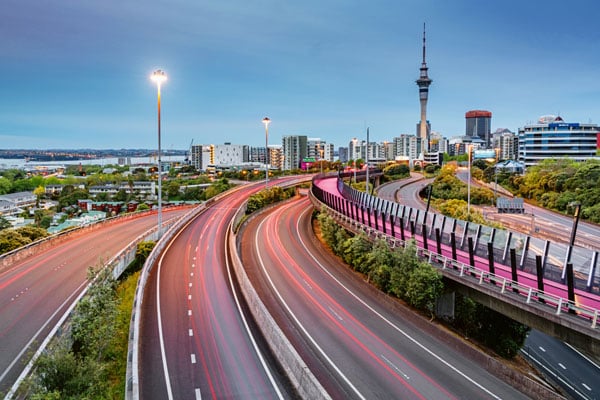 Through its ground-level galleries devoted to contemporary New Zealand art, the Auckland Art Gallery (free for New Zealanders; NZ$20 (about $14.50) for international adults) is a great place to get a feel for national concerns and the influence of the indigenous Maori culture on visual art. The lacelike paper panels, entitled ‘Milk and Honey’, commissioned from the artist Lonnie Hutchinson that explore the exploitation of indigenous women are particularly powerful. Wander upstairs under space-potato sculptures by the artist Judy Darragh suspended in the atrium, part of a 2011 expansion, to an older wing of the building where a series of portraits by the painter Charles F. Goldie, done in the early 20th century, lovingly capture detailed images of his tattooed Maori subjects.

Take a walk on Auckland’s counter cultural side along Karangahape Road, known locally as K Road. Near the city’s oldest cemetery, a string of music shops, cheap clothing dealers and craft stores mingle with bars and restaurants over several blocks. Wander into the vintage shopping mall St Kevins Arcade to browse the retro wares, from the second-hand bookstore Green Dolphin, focusing on children’s books, to vintage- inspired dresses from Rita Sue Clothing.

Before opening their innovative restaurant Pasture in 2016, the chef Ed Verner and his wife Laura Verner spent a year gathering elderflowers to steep in vermouth, pickling spruce leaves, brining wild fennel and aging butter so it tastes like Camembert. Now just 20 diners at a time can try that butter with their house-made sourdough – a side dish to a set menu of five to six small, seasonal and astonishing courses (NZ$160 to NZ$180).

Ed Verner makes ample use of an open fire for torching leeks and smoking everything from quince to duck. Menus highlight the bounty of New Zealand with an emphasis on vegetables. You’ll make no decisions about what to eat or drink, but you’ll be in hands so passionate that if you express a love of the eel broth, the couple might offer to package up an extra serving to take home. 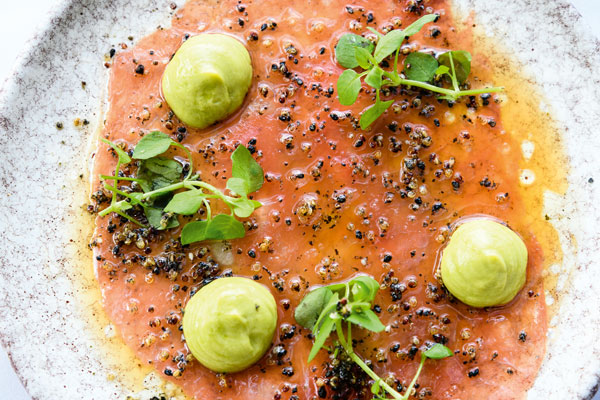 New Zealand is known for its Great Walks, nine stunning long-distance trails that span the geographic breadth of the country from coastlines to mountains. These lie far beyond the city, but the new Coast to Coast Walkway in Auckland takes a similarly comprehensive approach to trekking across town.

The roughly 10-mile route goes from the Waitemata Harbour downtown south across the isthmus to Manukau Harbour, stringing together a series of parks. Pick a portion to get a sense of the hilly volcanic topography and the locals’ love of nature from the vast Auckland Domain to verdant Mount Eden, the city’s tallest peak at roughly 640 feet, and One Tree Hill, another stamina- testing summit.

Devoted to the story of New Zealand from geology to politics, the Auckland War Memorial Museum holds treasures obscured by its title, namely the vast collection of indigenous Maori art works and crafts. It’s currently in the early phases of a 20-year plan to update the galleries, layout and access, but its rich collections remain on view, including more than 1,000 pieces of Maori treasures known as ‘taonga’.

These include full-size buildings, a war canoe and everyday objects such as fish hooks, all intricately carved. Arrive in time to purchase your ticket for the 11am. Maori song and dance performance which brings the culture enshrined in the exhibition halls to life (museum admission is NZ$25, or NZ$45, including the show). 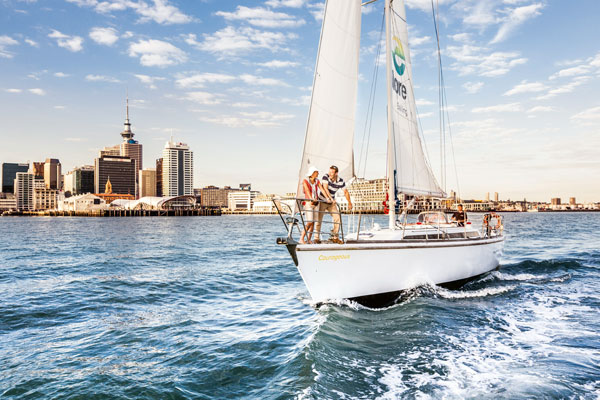 The city estimates that one in four Auckland residents owns a boat, and seemingly four in four are sailing fans — particularly after the Kiwi team won the most recent America’s Cup race versus the American team so decisively. The America’s Cup Sailing experience from the tour company Explore Group (NZ$180) allows amateurs to feel the thrill of a heeling 80-foot boat and the grind of raising the sails on two-hour trips in Waitemata Harbour.

The fleet includes a 2003 vintage boat that served as a practice ship for Team New Zealand long before the twin- hulled, hydrofoil catamarans of present-day racing came along. But the older model still provides plenty of speed and the crew encourages all passengers to steer and crank on the grinders to adjust the sails throughout the trip. 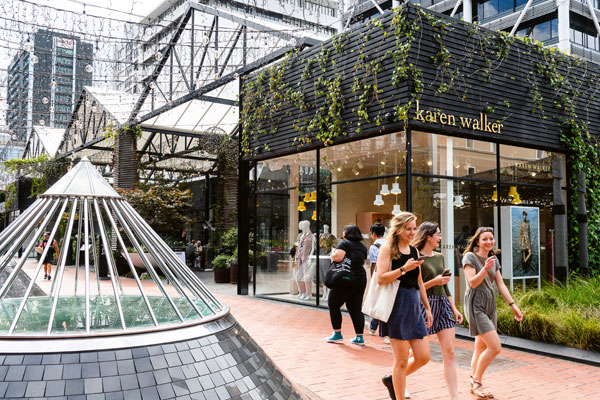 The 16-acre waterfront development Britomart, wedged between the harbour and the Central Business District, or CBD, mixes historic and new buildings that are rapidly filling with upscale tenants. A strong contingent of them wave the Kiwi flag for fashion, including boutiques from local designers such as Karen Walker, known for refining street styles in ruffle- edge dresses and cropped stovepipe pants; Trelise Cooper, whose dresses combine bohemian silhouettes with glam touches; and Kathryn Wilson, a women’s shoemaker with a taste for embellishment. Men get equal attention at Zambesi Store which makes progressive fashion for both sexes, and the spirited World which supplements its inventory of colourful, avant-garde looks with boutique beauty brands.

Chic cafes spill into the streets that web the Britomart district, offering convenient respite. The new Amano scales up farm-to-table and nose-to-tail cooking to serve sizable crowds in a former warehouse with rough plaster walls and exposed beams. An open kitchen spans the space, making theatre of chefs cutting fresh pasta or roasting chicken. The menu champions New Zealand ingredients from Kaipara oysters (NZ$4 each), to grilled lamb chops (NZ$34). Down the street, the similarly seasonal Ortolana offers fewer but no-less-sophisticated choices — try kingfish crudo (NZ$20) and pasta with clams (NZ$29) — plus superb people-watching from the patio or the conservatory indoors. 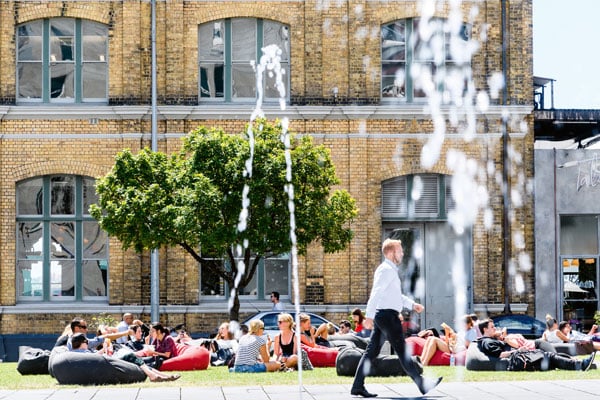 The developing Wynyard Quarter on Auckland’s western waterfront, reached by footbridge across Viaduct Harbour, can seem like a warren of construction fencing. But the Auckland Theatre Co., among the nation’s most acclaimed troupes, already calls it home with the ASB Waterfront Theatre, opened in 2016.

The 672-seat theatre and its spacious lobby, including a cafe, offers exposure to Auckland’s enthusiastic arts patrons as well as New Zealand playwrights such as Roger Hall and Briar Grace-Smith in comedic and thoughtful productions tucked between crowd-pleasing musicals and dramatic classics.

From the Wynyard Quarter to the CBD, it’s easy to make a progressive dessert and nightcap crawl on foot. In the Wynyard, the waterfront patio at the North Park Restaurant and Bar, decorated like a vintage sea shack, is a fitting locale for a white and dark chocolate brownie (NZ$13.90).

Across Viaduct Harbour, try to snag a seat on the packed patio of Soul Bar and Bistro for ginger crème brûlée (NZ$16). Order your nightcap neat at the Jefferson, a moody club which stocks 600 global varieties of beverages, tucked away in the alleylike Fort Lane. 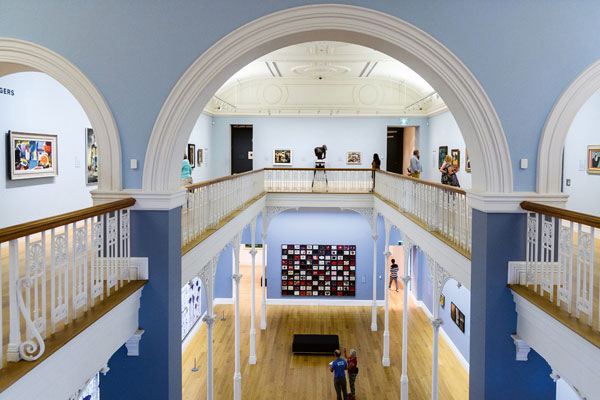 Coffee-crazed New Zealand is a country where you can find a barista at a rural gas station. Espresso bars seem stationed on every corner in Auckland, but when it comes to caffeine and the accompanying breakfast it’s worth the trek to the inner-city suburb of Ponsonby to rub elbows with the flat-white sippers seated at communal tables in Orphans Kitchen.

Auckland can hardly be considered frenzied, but for an extra dose of tranquillity hop the ferry to Waiheke Island, where culture meets nature over 35 square miles of scalloped beaches, vineyard-planted hillsides and welcoming art galleries.

Departing from Auckland’s downtown waterfront, Fullers offers regular 40-minute ferry rides to the island (NZ$38 round trip, or NZ$48 with an island bus pass). Hit the boutique-filled town of Oneroa to indulge in local bivalves at the breezy Oyster Inn, a nautically themed boutique hotel with a second- floor restaurant where patrons linger at tables on the balcony in view of the sea. 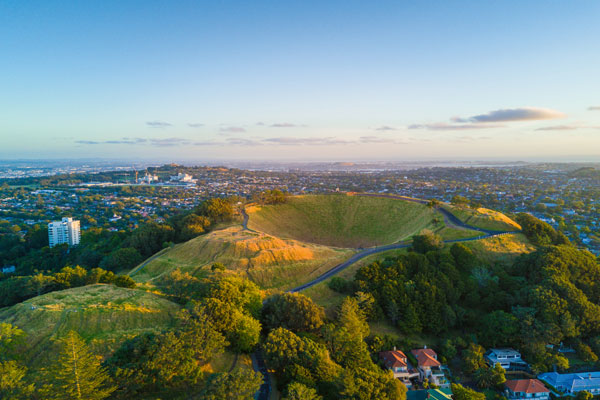 Airbnb offers great value in Auckland where a shortage of hotel rooms has inspired a hotel construction boom. For example, the one-bedroom listed as a Luxury Bohemian City Apartment is in a historic building on Queen Street and costs around NZ$136 a night.