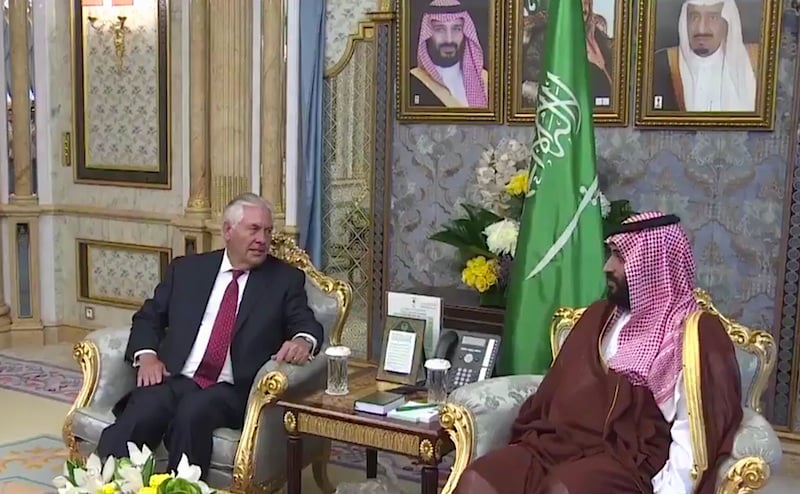 U.S. Secretary of State Rex Tillerson ended talks with ministers from Saudi Arabia and three Arab allies on Wednesday over how to end a month-long rift with Qatar, but there was no immediate word of any breakthrough.

Tillerson returned to Kuwait, the mediator between the feuding Gulf countries, without making any statement on his talks in the Saudi Red Sea city of Jeddah. He had signed a U.S.-Qatari accord on terrorism financing on Wednesday, but Qatar’s opponents said it fell short of allaying their concerns.

Any resolution of the impasse must address all the key issues for Saudi Arabia, the United Arab Emirates, Bahrain and Egypt, a senior UAE official said before the talks in Saudi Arabia.

The four countries imposed sanctions on Qatar on June 5, accusing it of financing extremist groups and allying with the Gulf Arab states’ arch-foe, Iran. Doha denies those accusations. The four states and Qatar are all U.S. allies.

Tillerson met the foreign ministers to try to end the worst dispute in decades among the U.S.-allied Gulf Arab states. He also met separately with Saudi King Salman and Crown Prince Mohammed bin Salman to discuss cooperation in combating terrorism and its financing.

“We’re happy to see this continuous cooperation between us and (to) even strengthen it and increase it further without limits …” Mohammed bin Salman said in welcoming Tillerson.

“I think it will ease tensions, but it’s just postponing the problem, which will grow in the future.”

In a joint statement issued after Tillerson and his Qatari counterpart signed their counter-terrorism pact on Tuesday, the four states called the accord inadequate.

They also reinstated 13 wide-ranging demands they had earlier submitted to Qatar, the world’s biggest producer of liquefied natural gas, as a condition for removing sanctions.

The demands include curbing Qatar’s relations with Iran, closing the Doha-based Al Jazeera TV channel, shutting a Turkish military base in Qatar and handing over all designated “terrorists” on its territory.

Anwar Gargash, the UAE minister of state for foreign affairs, sent a formal complaint to the U.N. High Commissioner for Human Rights on Wednesday alleging that Al Jazeera supported terrorism, sectarianism and anti-Semitism.

Al Jazeera, which has denied allegations of stoking violence and says it practices free speech, did not immediately respond to a request for a comment.

NOT JUST FUNDING OF TERRORISM

The crisis transcends the financing of terrorism, said Jean-Marc Rickli, a risk analyst at the Geneva Centre for Security Policy, pointing to Gulf fears about the role of Iran, internal instability and the regional influence of the Muslim Brotherhood as well as competition for regional leadership.

“Whatever the outcome is, one of the two sides will lose face, and losing face in the Arab world is something important. The consequences for the future will be negative for at least one camp or the other,” Rickli said.

France said its foreign minister would visit the Gulf, including Qatar and Saudi Arabia, on July 15-16 as part of its own efforts to overcome the rift.

In their statement on Tuesday, the four boycotting states said they appreciated U.S. efforts in fighting terrorism.

“… (But) such a step is not enough and they will closely monitor the seriousness of Qatar in combating all forms of funding, supporting and fostering of terrorism,” the statement said, according to the UAE state news agency WAM.

The United States worries the crisis could affect its military and counter-terrorism operations and increase the regional influence of Iran, which has been supporting Qatar by allowing it to use air and sea links through its territory.