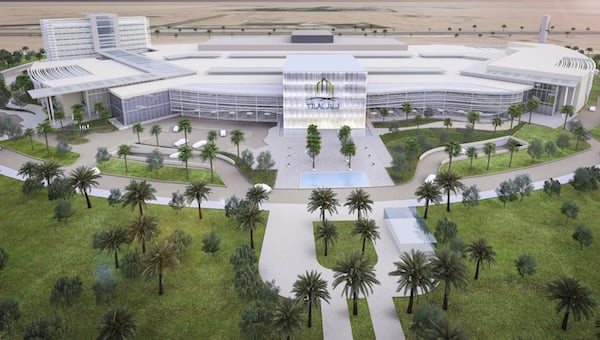 Tilal Properties, the real estate joint venture of Sharjah Asset Management and Eskan Real Estate Development, has launched what is claimed to be the emirate’s largest mall.

It will also include a 65-hectare recreational park with event spaces, amphitheatres, pavilions, waterfalls, plazas, restaurants, kiosks and exercise facilities including a climbing wall, basketball courts, football pitches, a skate park and other facilities.

Construction of the shopping centre, within the Dhs2.4bn ($653.3m) Tilal City master development off Emirates Road E611, is scheduled to begin in mid-2017 with an opening date of 2019.

Tilal City comprises 1,855 land plots along with parks, education and community facilities and was officially launched in November 2014. Construction of the development is scheduled to be completed in December and it is planned to provide affordable homes to 65,000 residents when finished.

“Tilal City will be a forerunner in contributing to the development of this new suburb in Sharjah, and at the centre of the development, Tilal Mall, which will play a key role in promoting investment opportunities and will reflect its strategic potentials on a global scale, further highlighting on what Sharjah has to offer to international investors and property buyers,” said Sheikh Sultan bin Ahmed Al Qasimi, chairman of Tilal Properties.

Design consultancy Arcadis has been appointed to lead the design of the mall and a connected hotel complex and will provide architectural engineering and cost consultancy services until the construction contract is awarded.

The firm is expected to finish its study in Q4 this year with a construction contract awarded before the end of 2016.