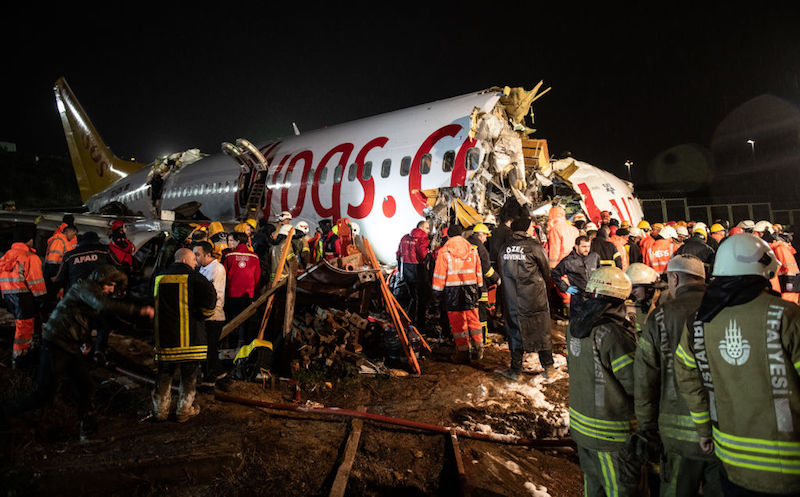 At least three people were killed when a Turkish jetliner broke apart after landing in wet weather in Istanbul.

In addition, 179 people were injured when the Boeing 737-800 operated by Pegasus Airlines veered off the runway at Sabiha Gokcen airport, Turkey Health Minister Fahrettin Koca said, according to the Associated Press.

Video footage showed passengers fleeing through gaps in the fuselage. The rear of the jet caught fire, while the front detached and came to rest upside down.

Turkish Transportation Minister Cahit Turhan said in televised comments that there were 183 people onboard including six crew members. One person remains unaccounted for, the AP reported.

The single-aisle jet had flown from Izmir on Turkey’s Aegean coast, authorities said. It appeared to have plowed down a slope from the runway and stopped short of a busy road, one of the main highways going into the city, based on photos of the aircraft. The plane was traveling at 117 kilometers an hour (72 miles an hour) near the end of the runway, according to Flightradar24.

A Pegasus spokeswoman confirmed that the narrow-body was a Boeing plane, part of a fleet that includes Airbus A320 aircraft.

The 737-800 model, which has a good safety record, predates the 737 Max version that has been grounded worldwide since March after two fatal crashes.

“We continue to receive reports out of Istanbul, Turkey, regarding the accident involving Pegasus Airlines,” Boeing said in a statement. “Our top concern right now is for the safety and well-being of the passengers and crew onboard. We are in contact with our airline customer and have offered them our support. We stand ready to assist in any way possible.”

Sabiha Gokcen airport, located on the Asian side of Istanbul, was closed following the incident. All incoming flights diverted to a new hub on the city’s European side.

The accident wasn’t the first such incident for Pegasus. Last month, one of the airline’s 737-800s ran off the edge of a runway at the same airport after landing in bad weather, resulting in no injuries.

In January 2018, a Pegasus jet carrying 168 people slid off a runway at Turkey’s Trabzon Airport. There were no injuries reported, but one of the engines fell into the Black Sea as the Boeing aircraft slid down an embankment.