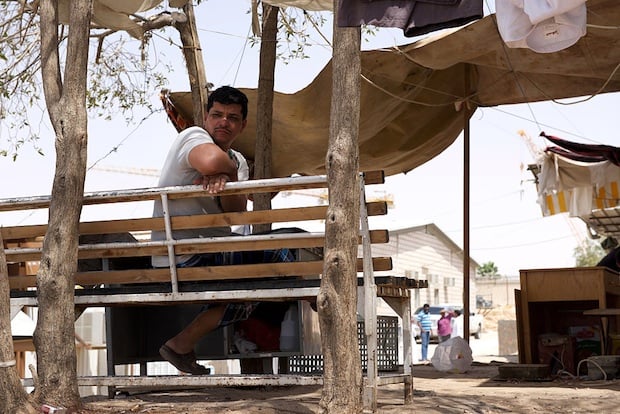 Migrant construction workers, abandoned in their thousands by Saudi employers in filthy desert camps during the kingdom’s economic slump, say they will not accept a government offer of free flights home unless they receive months of unpaid wages.

The plight of the workers, stranded for months in crowded dormitories at labour camps with little money and limited access to food, water or medical care, has alarmed their home countries and drawn unwelcome attention to the conditions of some of the 10 million foreign workers on whom the Saudi economy depends.

The government says it is trying to resolve the situation by giving the workers — who normally need their employers’ permission to leave the country — the right to go home and free transport back. It is also granting them special permission to stay while they look for other jobs.

But workers say they fear that if they leave they will end up with nothing at all.

“We will wait here – one year, two years. We will wait for our money. Then we will go back,” said Sardar Naseer, 35, a Pakistani welder at the Qadisiya Labour Camp, which houses around 2,000 workers from construction conglomerate Saudi Oger.

Naseer says he is owed SAR22,000 ($5,900) after receiving no wages for eight months. Workers at the camp, about 20 km (13 miles) from the centre of Riyadh, said they had stopped work about four months ago and none had been paid since January.

Oger, the family firm of billionaire former Lebanese Prime Minister Saad Hariri, did not respond to requests for comment for this story. The Hariri family did not immediately respond to an e-mail seeking comment.

In July, Oger stopped providing food, electricity, maintenance and medical services at several of its camps including Qadisiyah, prompting the Saudi Labour Ministry to take over provision of basic services there, men at the camp said.

They sleep six to eight to a tiny room, with stray cats and cockroaches lingering on torn bedsheets. They sit on the floor to eat food rations provided by the Labour Ministry or their embassies. 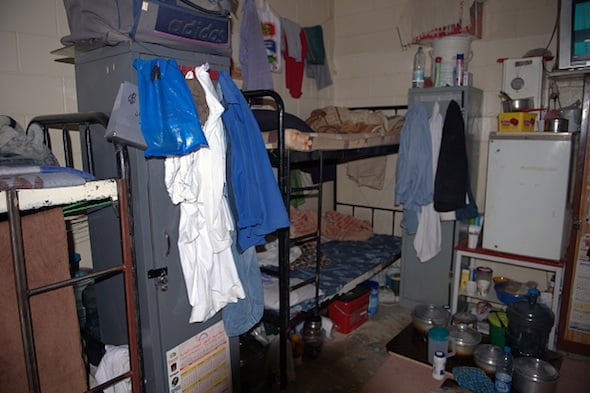 There is no regular supply of clean drinking water — a filter on a public water fountain meant to be changed daily has not been serviced in a year — so they are forced to buy bottled water with their own money.

It is one of Saudi Arabia’s two most prominent construction companies, along with the Saudi Binladin Group. Both have faced financial difficulties as the world’s biggest oil exporter has suffered from the fall in the price of crude.

Construction projects have been halted or slowed and revenue has fallen. As the salary delays have worsened, frustrated workers have in some cases staged rare public protests.

Countries including India, Pakistan and the Philippines have sent senior officials to Riyadh to press authorities to assist their workers. Indian officials said this month that more than 6,200 former Indian employees of Oger were stranded in Saudi camps after being laid off and owed wages.

India to bring back workers facing ‘food crisis’ in Saudi

Two weeks ago, after Indian authorities raised their concerns, King Salman set aside SAR100m of government money to help the stranded workers, mostly from Pakistan, India, the Philippines and Bangladesh.

Oger is the only company still broadly withholding payments, and the Labour Ministry will press foreigners’ wage claims through the kingdom’s labour dispute system, Haqbani said, without specifying when claims might be resolved.

“Saudi Oger – now we’ll take it to the courts. Now we are responsible for that. We’ve hired lawyers,” he said. “As the ministry, we will go through the labour dispute courts to go after Saudi Oger and to collect the claims.”

He also said the troubles at Oger were not a sign of problems with Saudi Arabia’s overall employment of foreign workers, most of whom were choosing to remain in the country.

“This is a small segment…of the labour market. We have more than 10 million expats working happily here in the country. When a company like Saudi Oger fails to comply with the rules, this will never destroy the good image of our labour market.”

Philippines Secretary of Labour Silvestre Bello, who visited Riyadh for talks with Haqbani last week, said that with the assistance of Saudi authorities, about 1,000 Filipino workers could be sent home by mid-September.

At the camp, Mohammed Niaz, 42, said his two daughters back in Pakistan had stopped attending school because he could no longer send money home for fees.

“I’m wasting my time. I want to go to Pakistan,” he said.

But he added that he refused to leave Saudi Arabia without the SAR13,000 which Oger owed him. “My family has no money. My daughters are out of school. How can I go to Pakistan?”